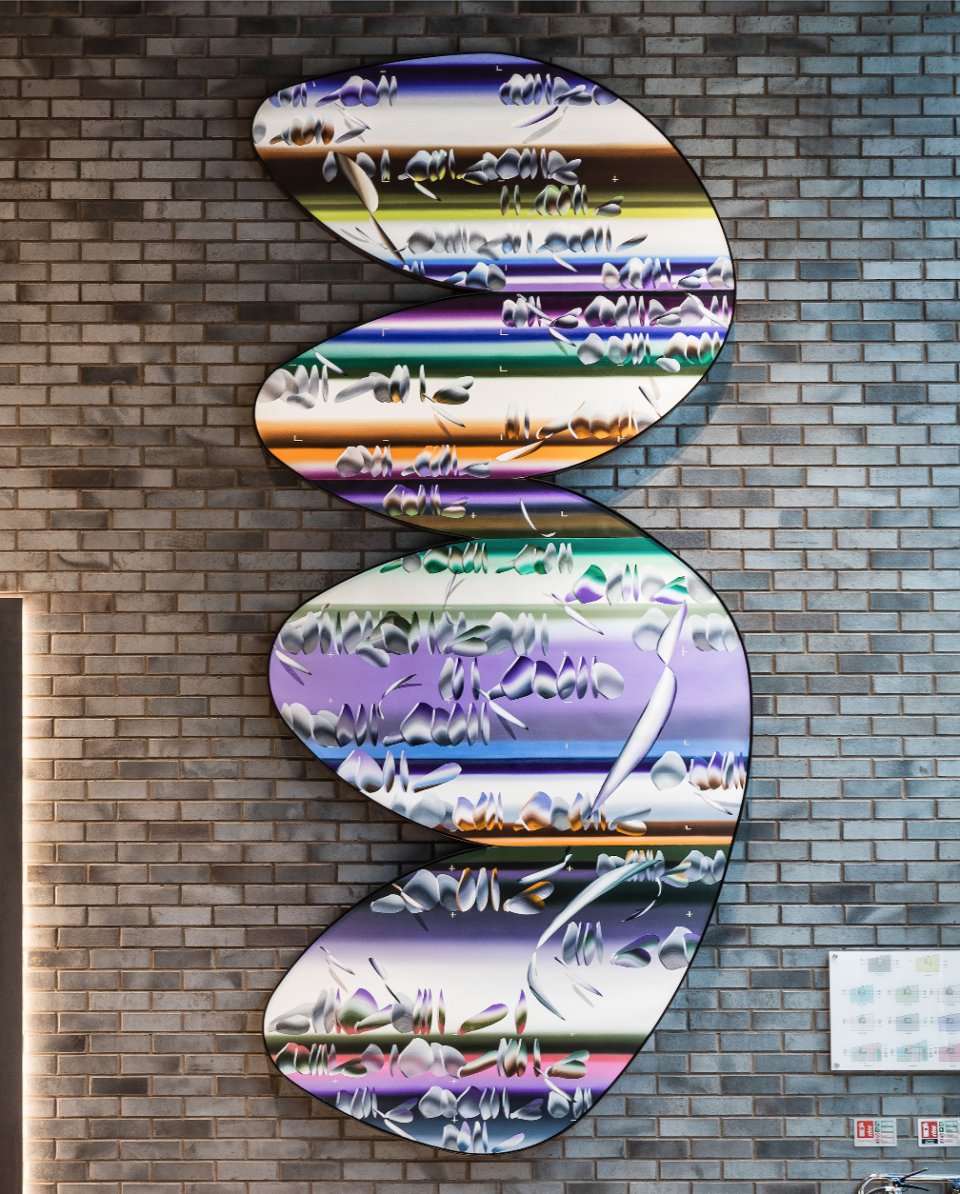 The Contemporary Art Society commissioned Vivien Zhang to devise a new artwork for the reception spaces of a mixed-use building opposite the iconic Wembley Arena. Wembley as a site of flux is key to this artwork – its culturally diverse populations, many of whom are not originally from the area, the physical use of the various venues and infrastructure, the opportunities for gathering and shared experiences and the ongoing regeneration of the area.

Commissioned by Quintain, the award-winning development team behind Wembley Park, as part of the developer’s commitment to the cultural life and legacy of Wembley, Cartographer’s Fugue is an ambitious and ground-breaking artwork for London-based painter Vivien Zhang. The title of the work plays with the double meaning of the word fugue: relating both to a musical motif in which a phrase (like Zhang’s Gömböc) is repeated by two or more voices and begins to change; and to a psychological state of memory loss and the urge to travel to establish a new identity.

A reflection of the digital information age and our relationship with technology more widely, Zhang’s painting acknowledges the artist’s self-described state as a digital native and third culture citizen. It invites fellow citizen-natives to consider their relationship to space and place in the post-digital age.

The unorthodox shape of the canvas is a departure for Zhang and references the 1923 Goode map projection. The Goode map is an attempt to more truthfully depict the relative sizes of landmasses than the traditional Mercator global projection, which makes Greenland (2 million km²) look as large as the African continent (30 million km²). Further abstraction addresses another map-making construct – that North is ‘up’ – and flips the profile on its side.

The organic lines of the projection, which is often referred to as the ‘orange peel’ map, are presented in contrast to the crisp geometric shapes of the reception area, while reflecting the iconic Wembley Stadium’s arch.

Within the painting, the artist concentrates on depictions of a very particular shape: the Gömböc, a three-dimensional body that, when resting on a flat surface, has just one stable and one unstable point of equilibrium. The potential existence of such a shape was mathematically proven by the Hungarian scientist Gábor Domokos in 2006. For Zhang, the shape is a useful metaphor for a discussion about stability versus instability within her generation and its pursuit of a fairer, greener future through popular movements like Extinction Rebellion or the move towards veganism. Zhang paints the shape from a variety of angles, following a self-devised algorithm and its internal logic, which creates the illusion of order in the work.

Vivien Zhang was born in Beijing in 1990 and lives and works in London. She graduated from the Slade School of Fine Art, UCL in 2012 and the Royal College of Art in 2014. Zhang’s work looks at the idea of repetition and painting as a site for assemblage. The artwork no longer serves as a place for the narration or representation of an image or scene. It is where elements congregate and collide, and such may be context-specific motifs, residue from activities in the studio, or extractions of previously employed motifs. Some examples include the mathematical shape gömböc, African furniture from her childhood home, crumpled aluminium foil and Victorian medical prints.

The juxtaposition and layering of motifs in Zhang’s work often follow algorithms found in digital imaging tools – a process by-product of our ways of reading and engagement with visual material today. New hierarchies and distances are thus negotiated on the painting surface, as a reflection of our expanding accessibility to images and information today, and as a reflection of our increasing adaptation into trans-border inhabitants.