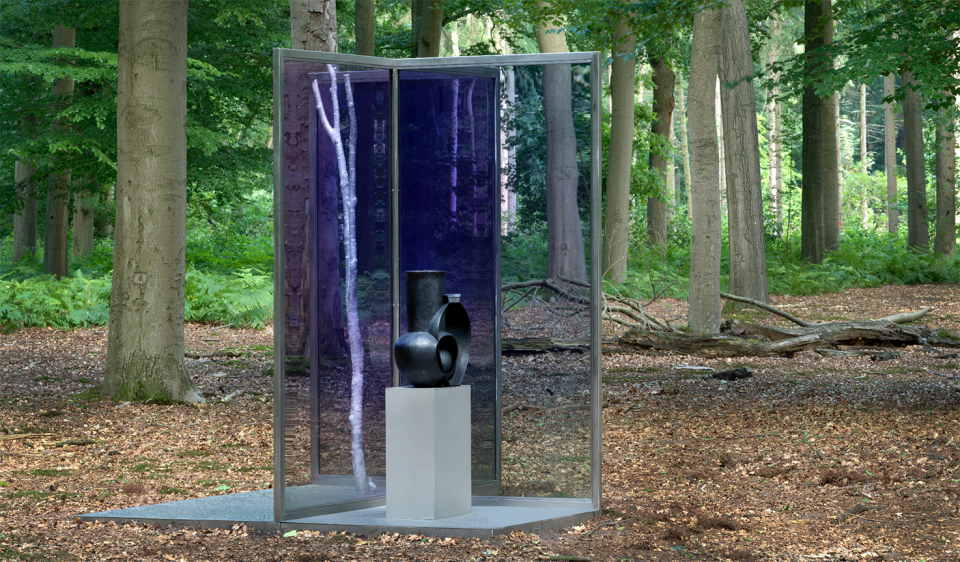 The work Setting, which the Belgian artist Filip Vervaet (b. 1973) made for DELIRIOUS, is closely related to his recent oeuvre, in which the relationship between human and nature is central and glass plays an important role. A construction of four laminated coloured glass plates stood on an concrete platform, located among the trees. Given the life-size format, it could be a section of a 21st-century office or a hypermodern city apartment.

The glass acts just like a window in a building: depending on the viewer’s position, it offers a view of the interior or the exterior. So the glass functions as a reflection of its setting, while also offering a glimpse into another setting. Walking around Setting, visitors saw in turn the natural woodland surroundings, a designer vase sculpture on a pedestal, which would not look out of place in an interior-design magazine, and a leafless aluminium tree.

The artificial depiction of a natural object is a frequently used element in Vervaet’s practice, symbolizing the malleability of nature. The layered and coloured safety glass creates some distortion and consequently confusion about scale and proportions, and about the real, the artificial, and the possibility of an unseen, fictitious world. With this unique work, Vervaet expands the boundaries of both sculpture and perception.

His visual idiom combines art-historical references, allusions to science fiction and to both existent and non-existent civilizations. The vase sculpture in Setting consist of an amalgamation of copies of Japanese, Egyptian and Congolese storage jars. Vervaet also experiments with a large arsenal of organic and artificial materials and works with traditional crafts as well as new techniques. His work is characterized by meticulous design and technical perfection. At the same time, human traces can always be felt in the work, often literally, in the form of the marks left behind by Vervaet’s sculpting fingers.