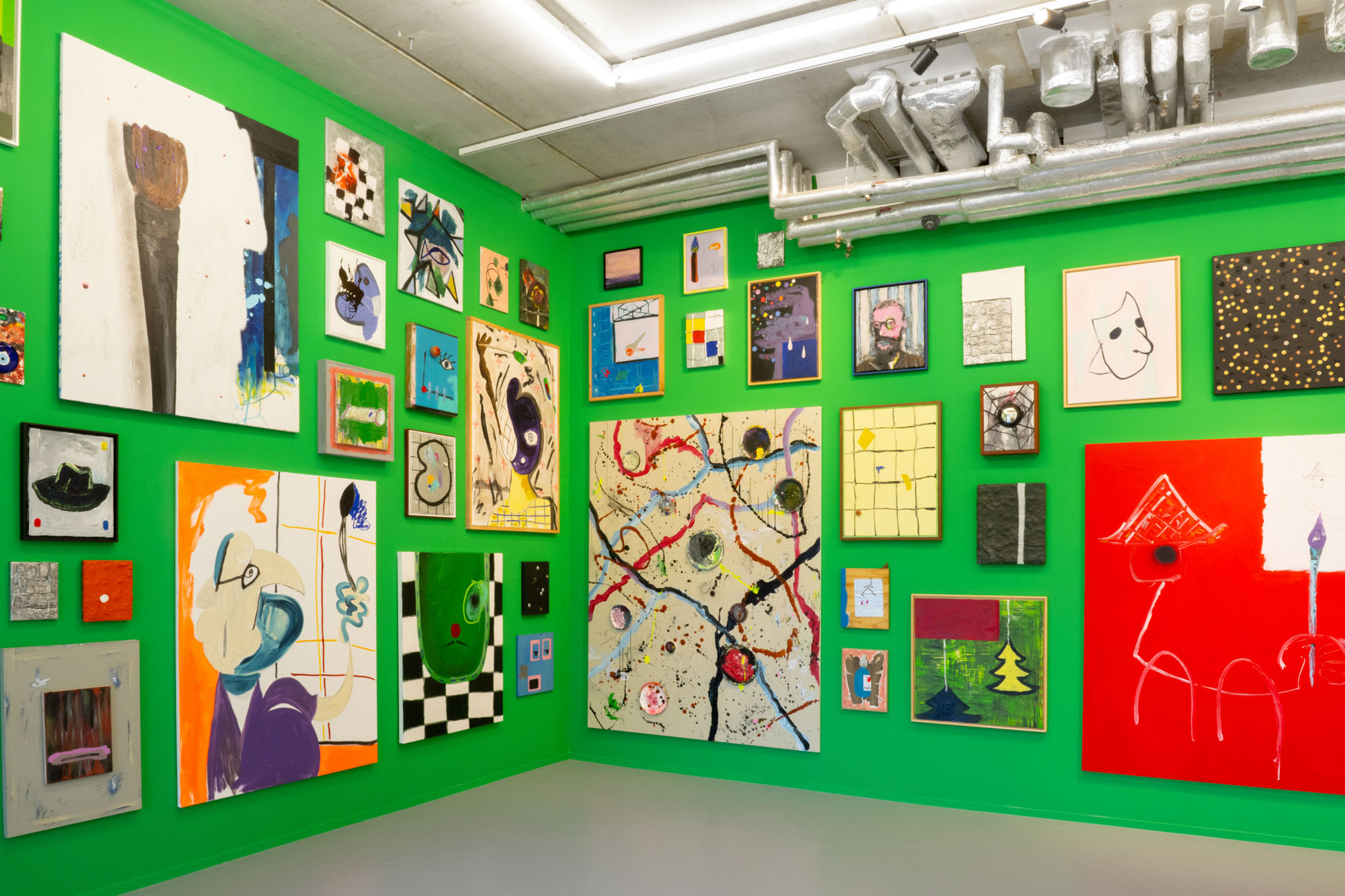 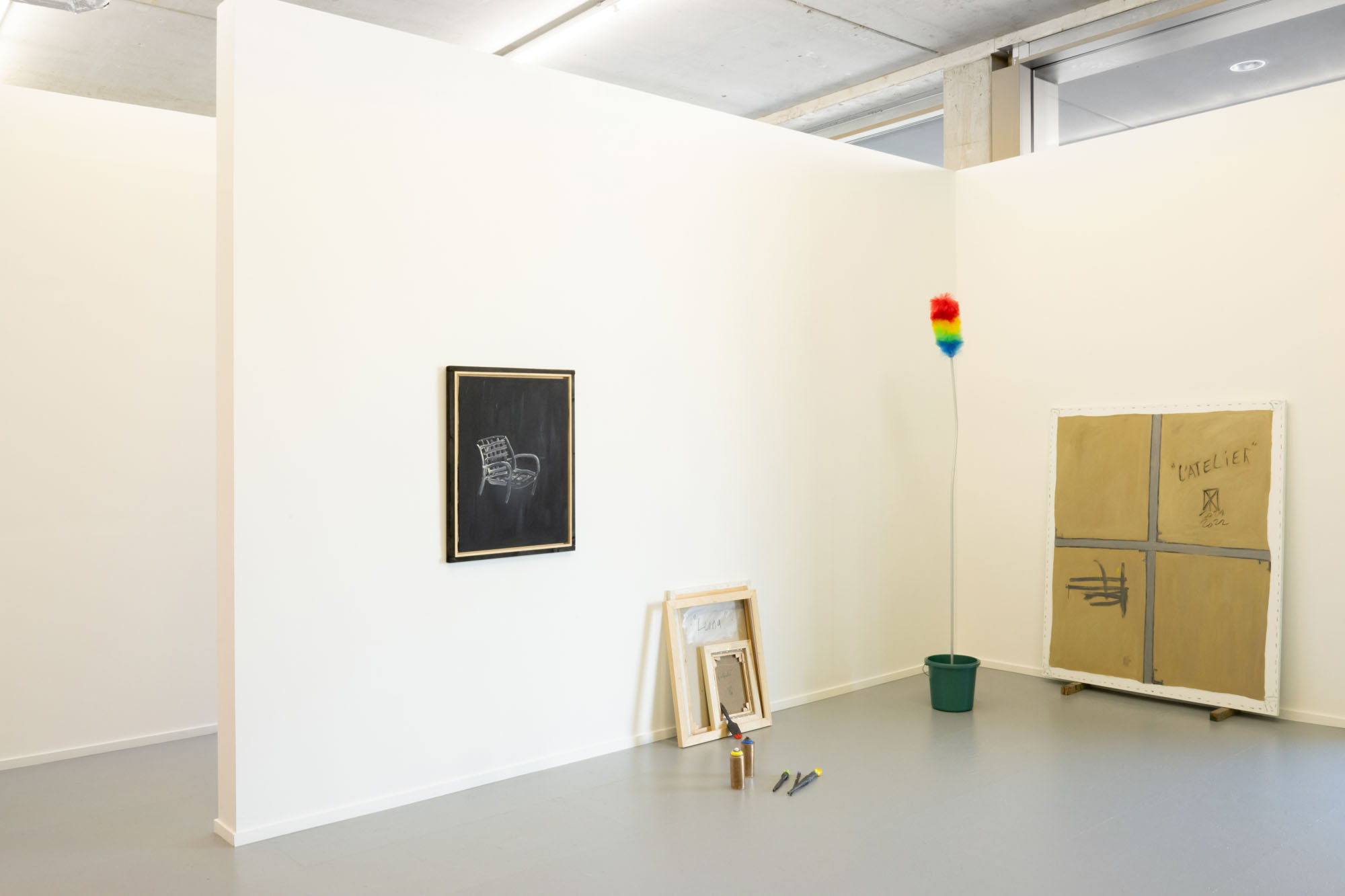 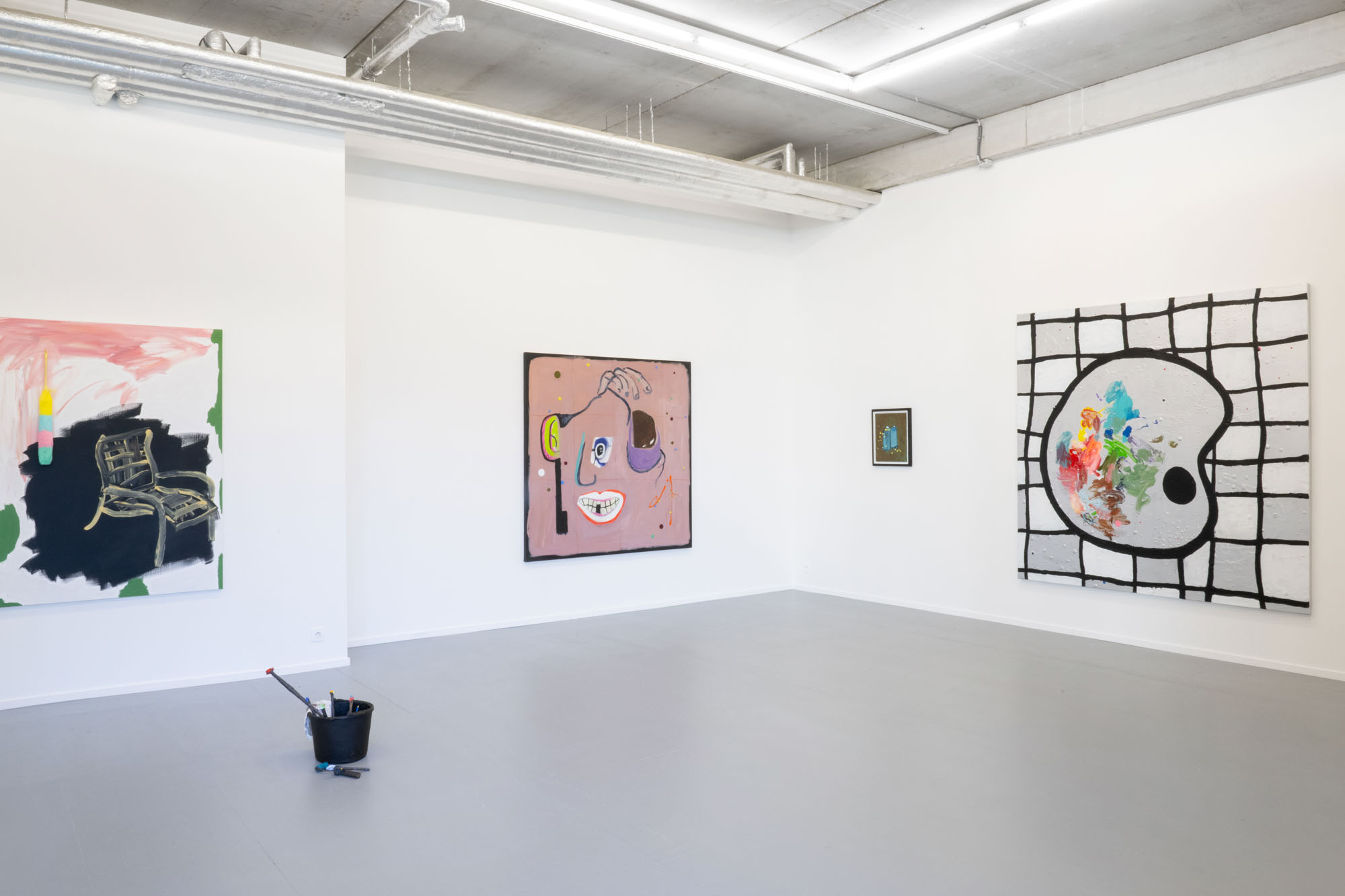 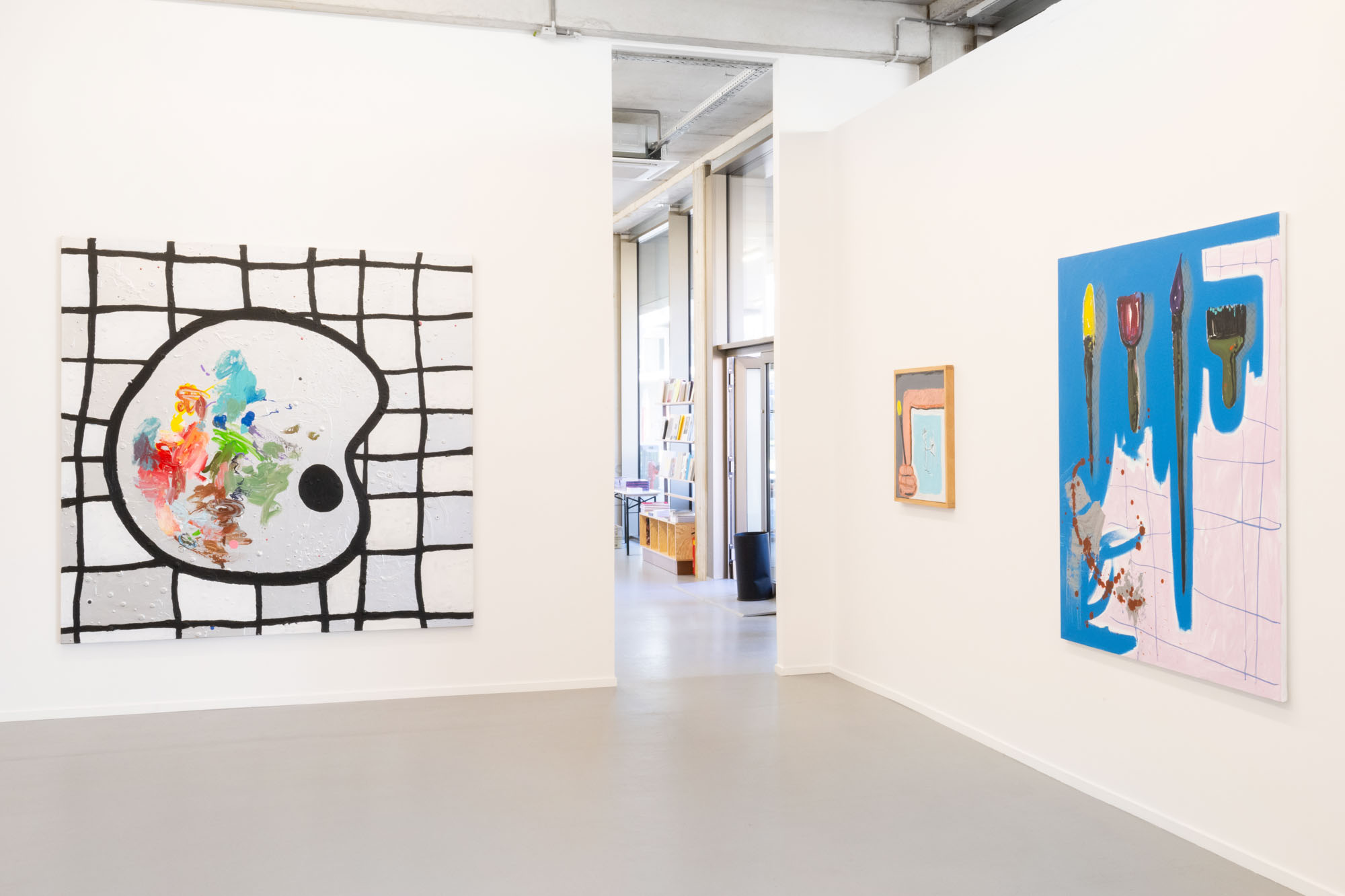 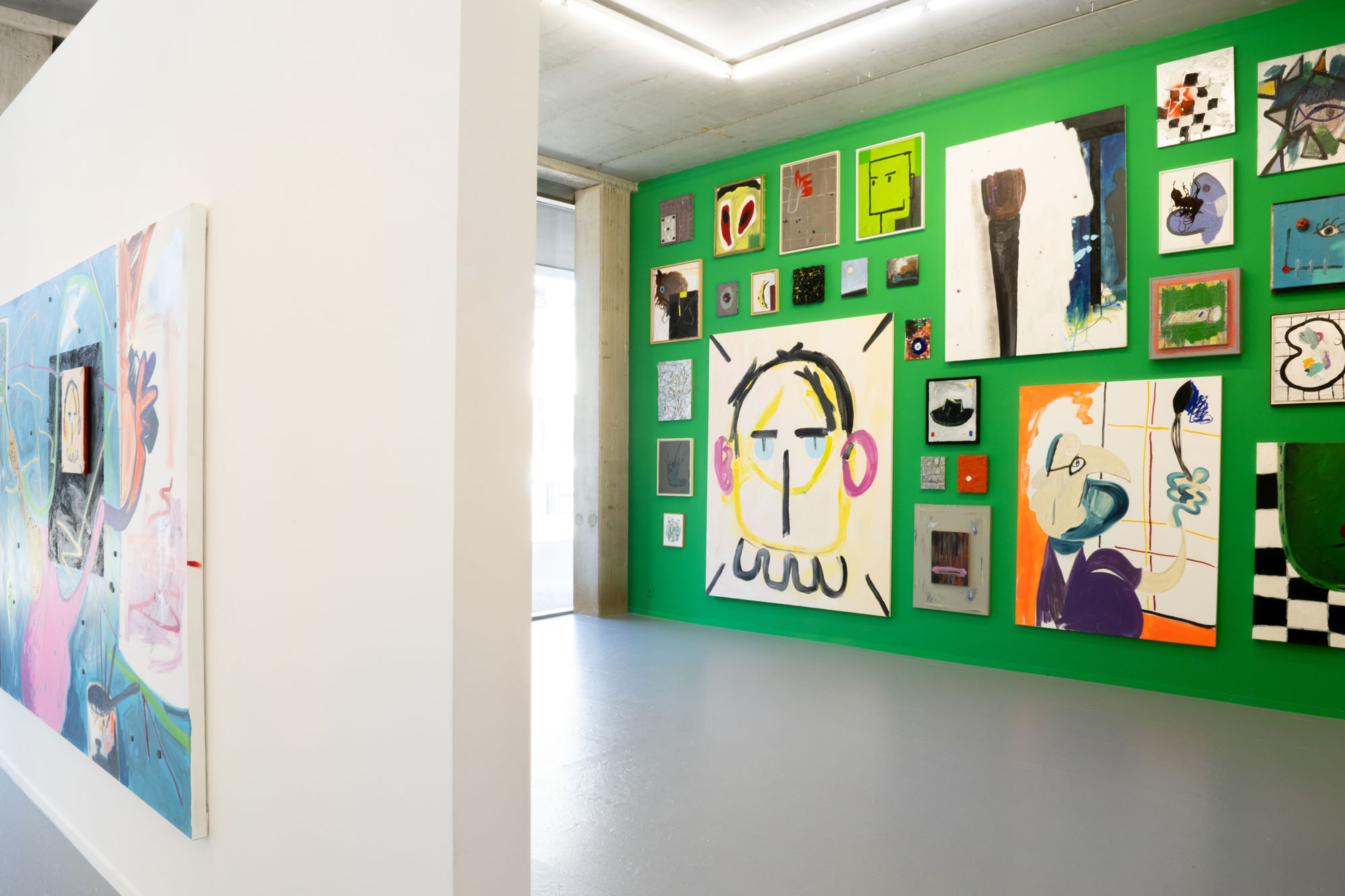 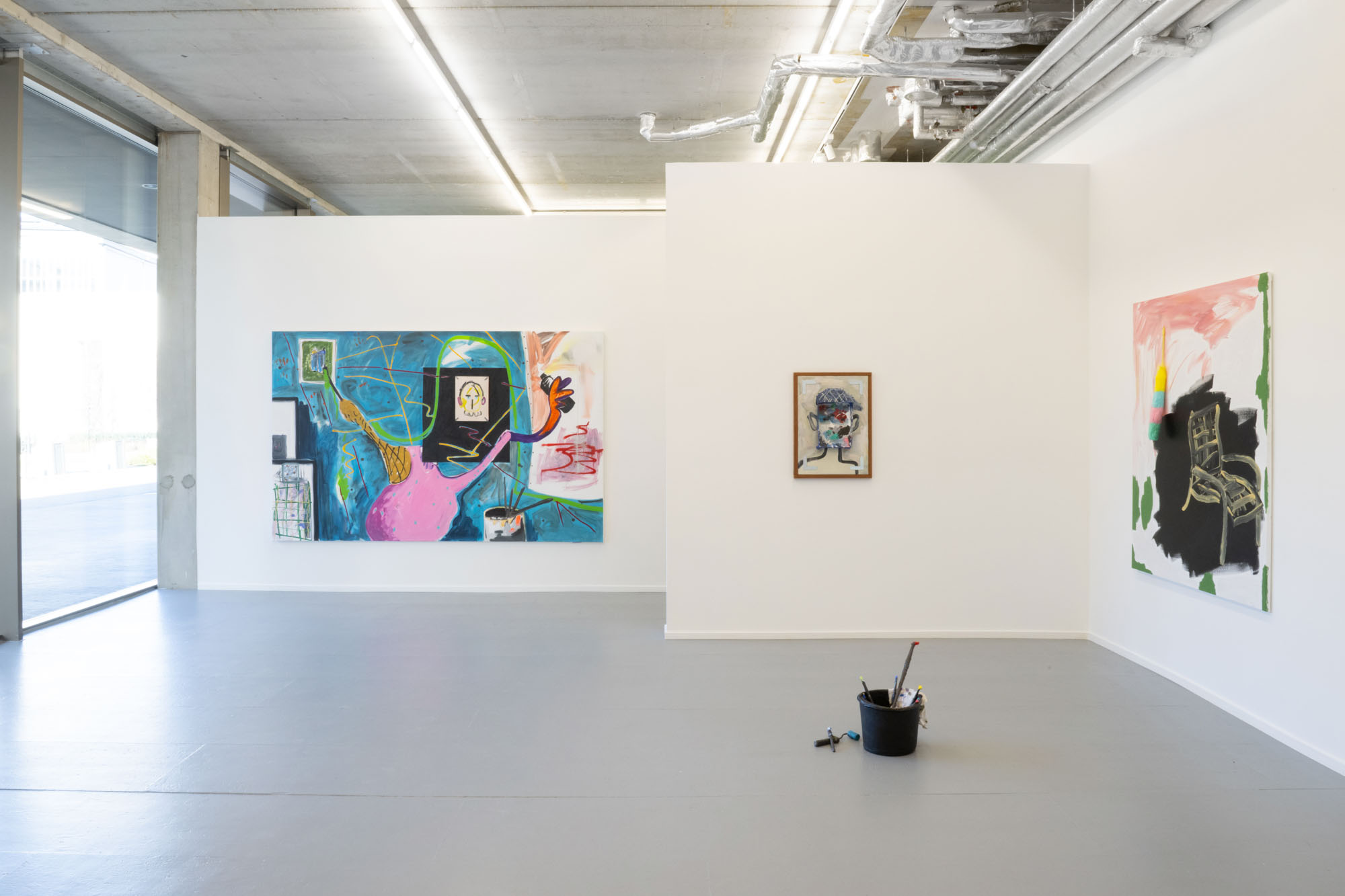 PLUS-ONE Gallery is happy to announce the first solo exhibition by Xavier Noiret-Thomé at the gallery. His work will be on view from February 26 until March 27, 2022.

Xavier Noiret-Thomé's proposal for his first solo exhibition at PLUS-ONE Gallery perfectly encapsulates the visual and conceptual richness of his artistic practice. It is nourished by the history of art and painting, perfectly anchored in its era and at the same time completely aware of the challenges of painting in the digital age.

The exhibition starts in the gallery window with the work Palette Puppet, which evokes a double perspective. By painting an eye on the palette, Noiret-Thomé transforms the object into a puppet and symbolises the transition from reality and representation, from shape and content. The puppet also embodies the criticism of the great human (and artistic) comedy in which some people allow themselves to be carried away. However, do not be misled, Xavier Noiret-Thomé does not limit himself to criticising society and the art world. His approach often leads to astonishment on the part of the viewer, as his critical thinking never lacks humour. "Painting is something light that has to be considered with a great deal of seriousness, but it is also something earnest that should be approached with a great deal of frivolity," he explains.

'Metastudio' takes us into the eye of the storm: the artist's studio. The exhibition's installation is a "mise en abime" that embodies the organic and mental interconnection of life and art. At the same time, the exhibition invites the viewer to discover the complexity of creativity. In his studio, where he works and listens to jazz daily, doubts and certainties intertwine, unfinished and finished works coexist in a cheerful mess. Within this permanent process, certain paintings will be reworked for years.

Metastudio effectively and metaphorically embodies all the ingredients of the artist's continuous work process: the painter's gesture (sketch of an artist painting on the floor with an easel, self-portrait of the artist with a paint tray), the environment of the studio (the sofa) and the tools (the paint brushes, the spray cans, the back of the canvas). Figuration and abstraction dialogue and confront each other, turning into formal and stylistic quotations (Mondrian, Matisse, monochrome) and creating associations that are both unexpected and challenging.

By presenting dozens of works on two "Chromakey" green walls (video overlay colour), he offers a new interpretation for what he defines as "metaphysical painting", which transcends the physical appearance of reality and embodies a sensory experience. Xavier Noiret-Thomé reminds us that in times where art is becoming more and more "Instagrammable", the physicality of paint on canvas and the act of painting reach a new dimension. Juggling with humour, between déjà vu and illusion, Noiret-Thomé reaffirms the iconophilic and iconoclastic gesture. Through a selection of paintings made between 2000 and 2022, 'Metastudio' succeeds in capturing the essence of the work, from its creation to its presentation, in a jovial manner.

Recently Noiret-Thomé has shown his work at CENTRALE during a duo exhibition with Henk Visch, as an ode to painting and sculpture.

The upcoming exhibition of Noiret-Thomé will be at Beaux Art Mons (BAM): Expressionism and lyrical abstraction in the collection Neirynck-Duvivier. Co-curation Xavier Noiret-Thomé & Xavier Roland.