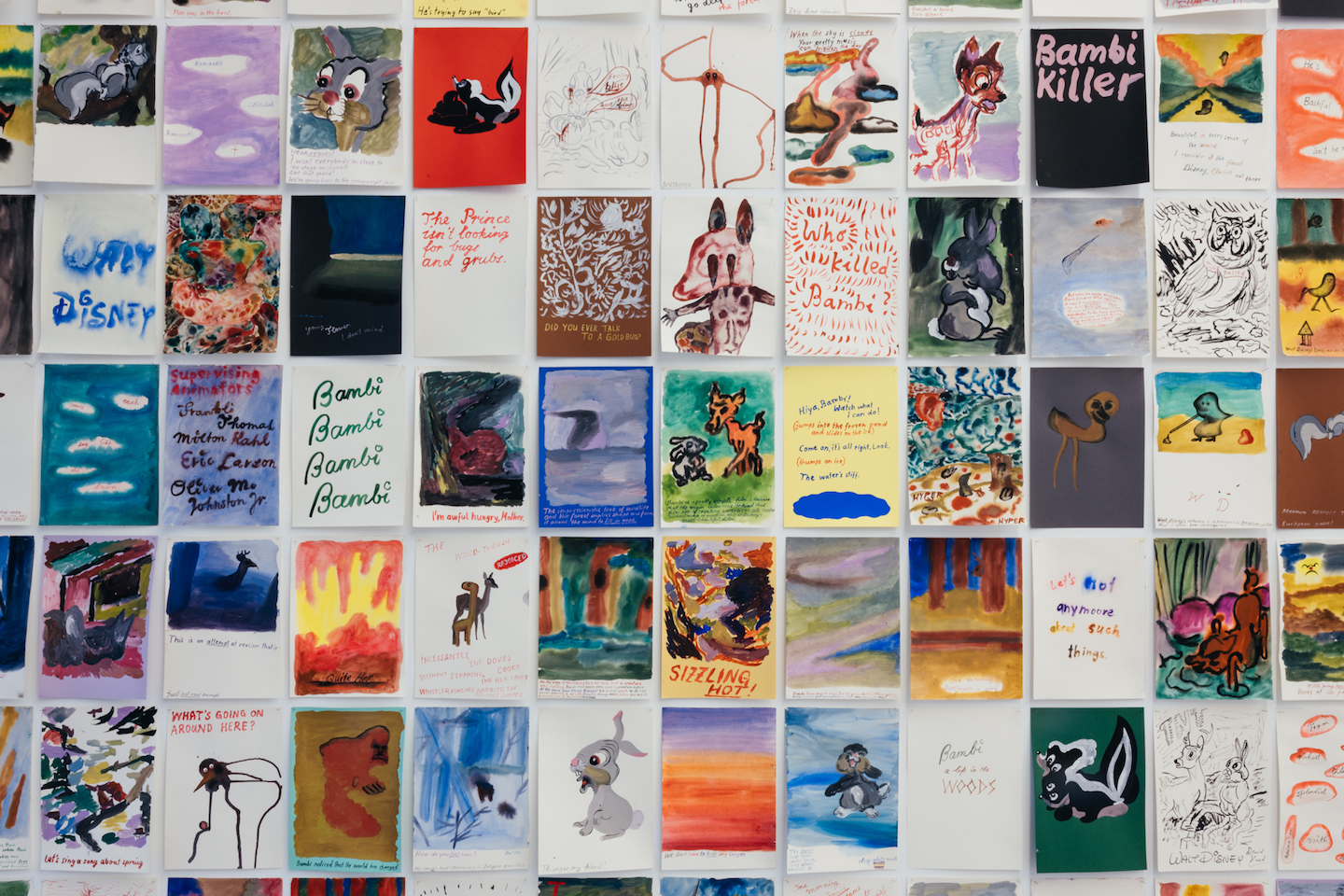 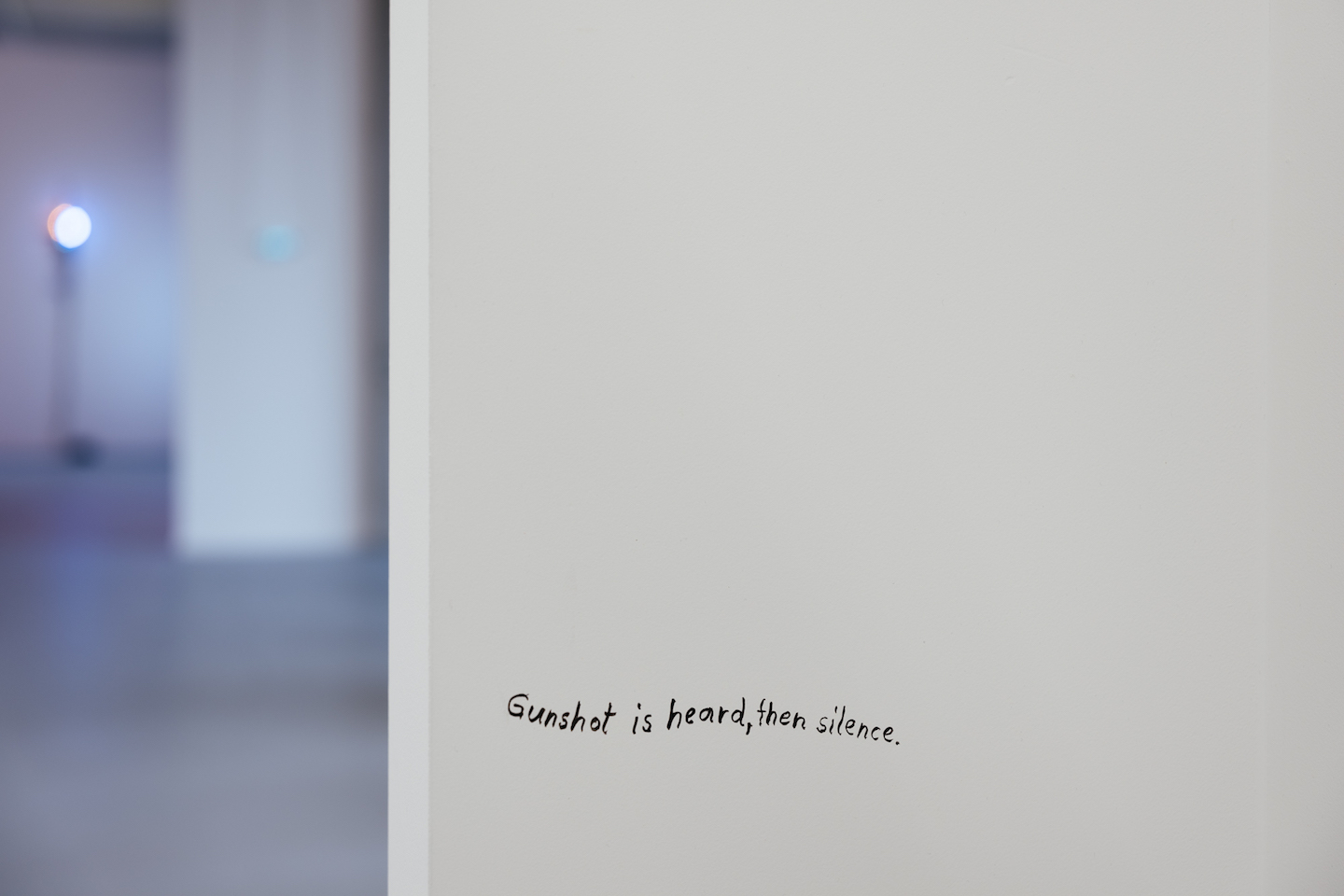 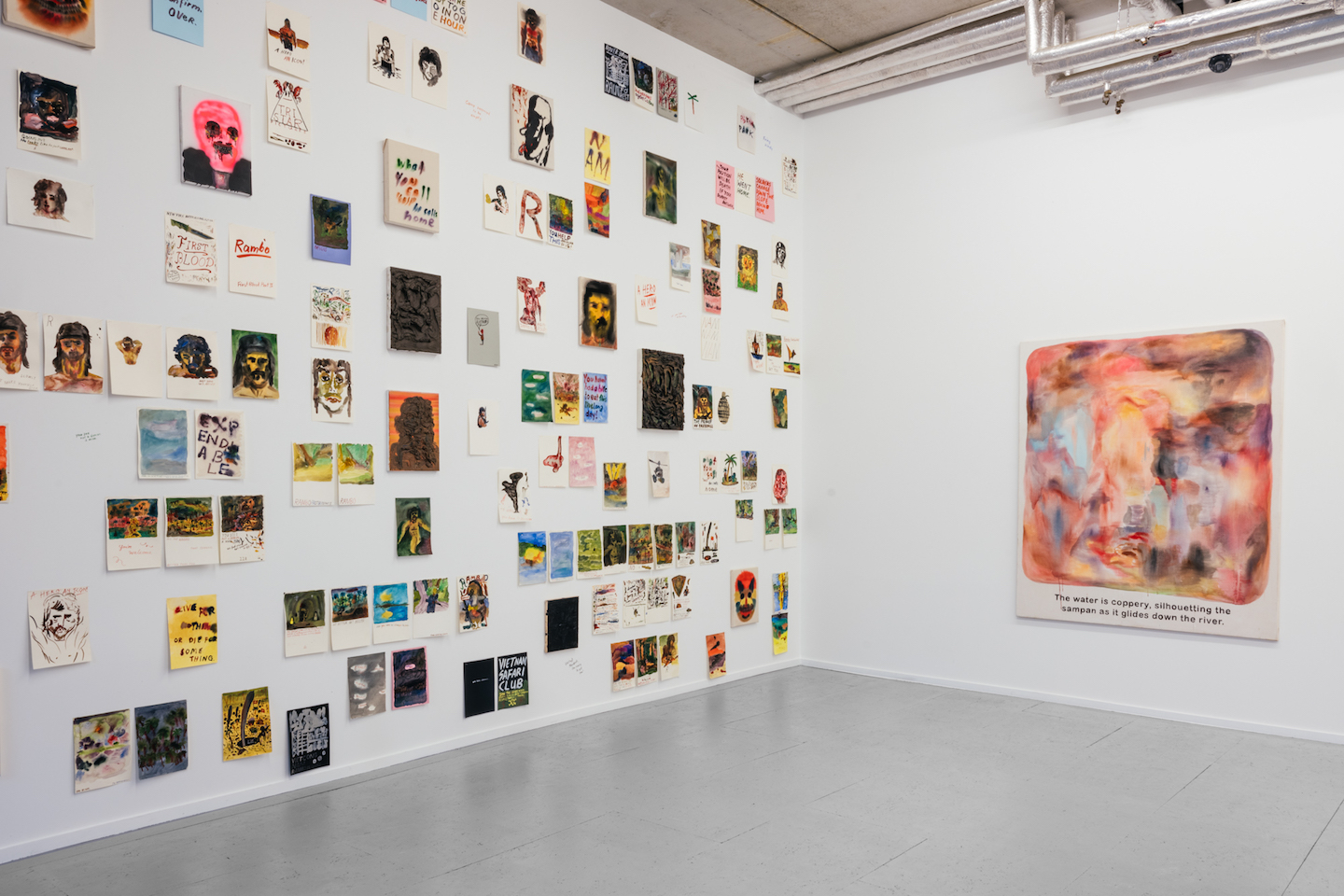 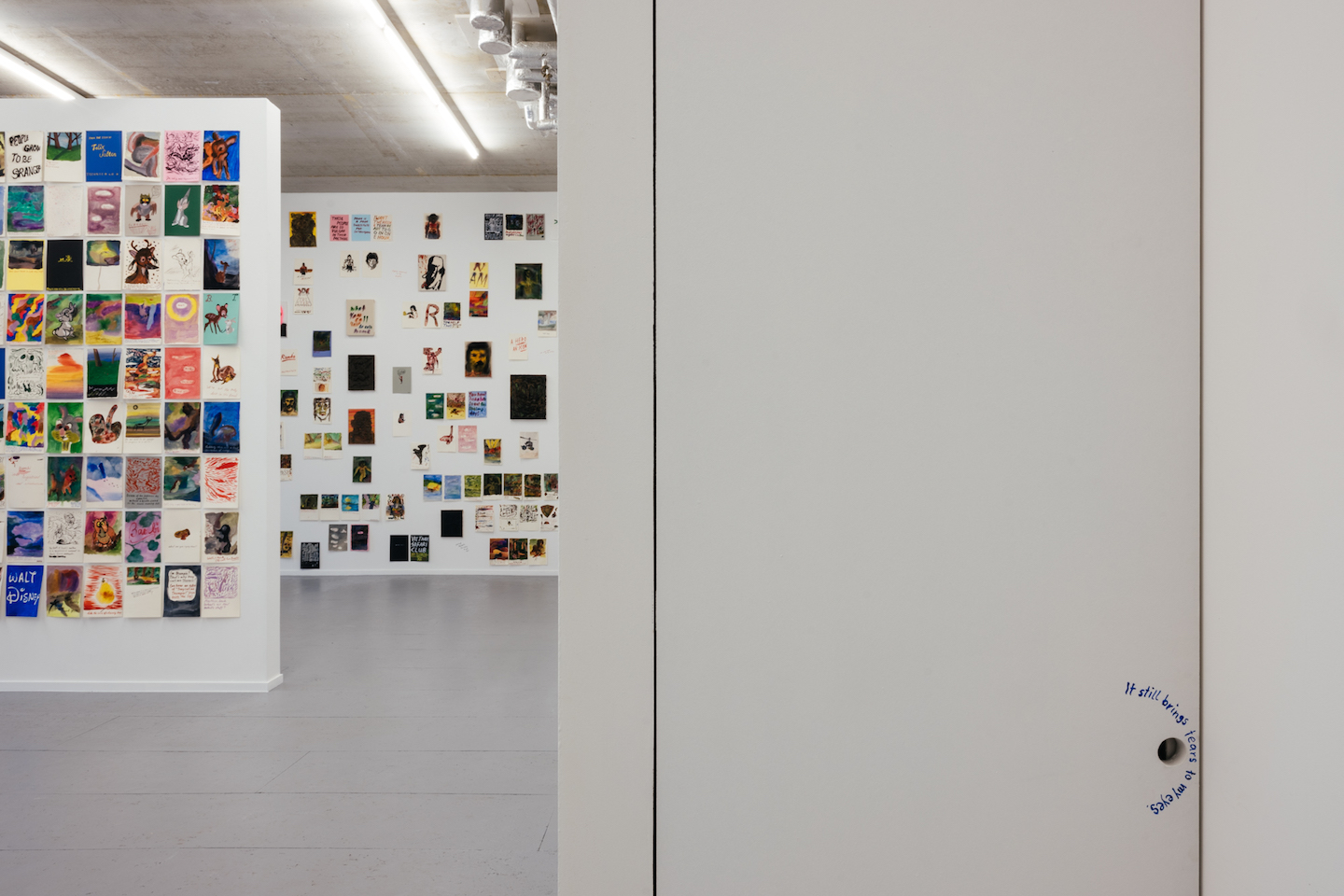 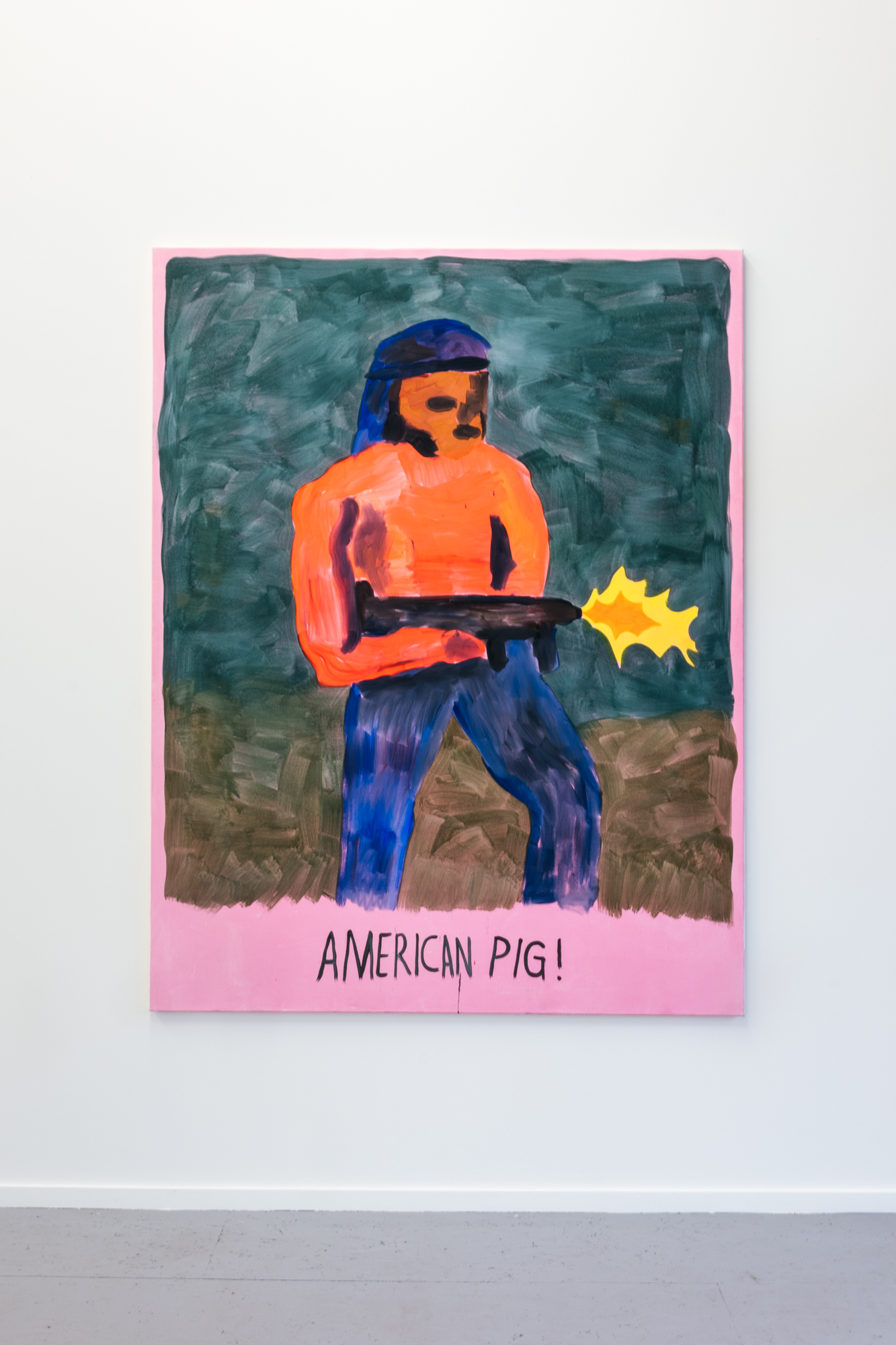 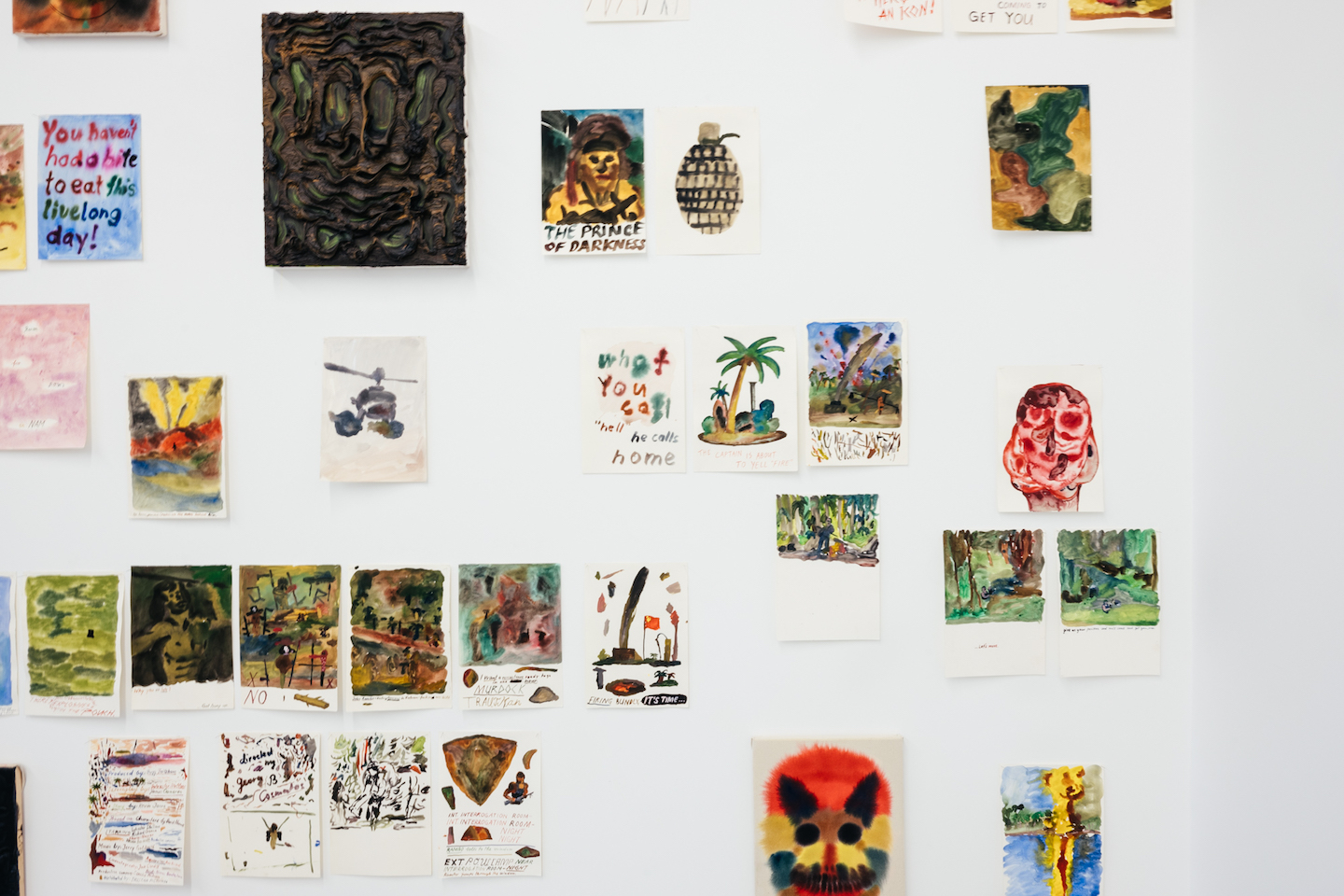 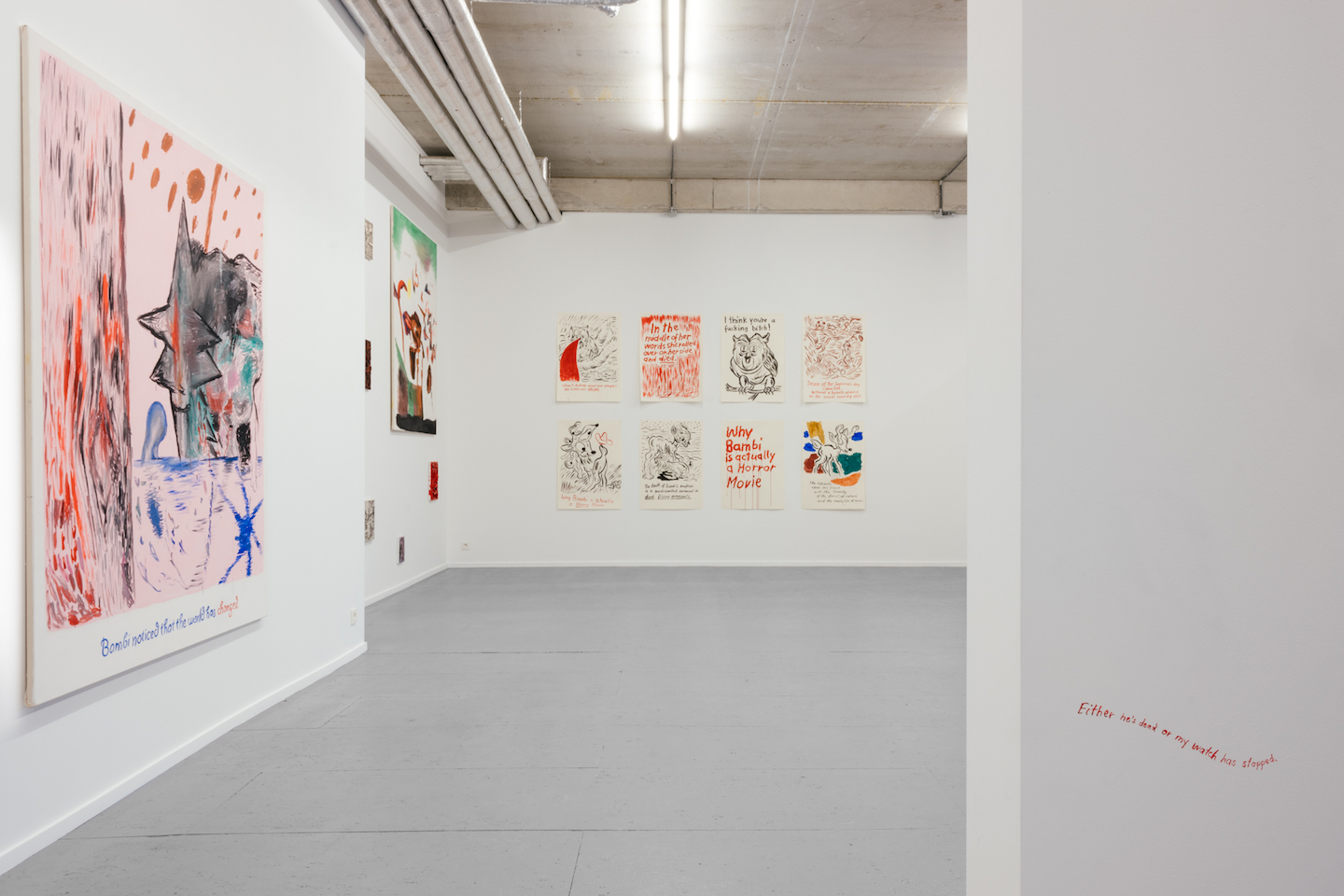 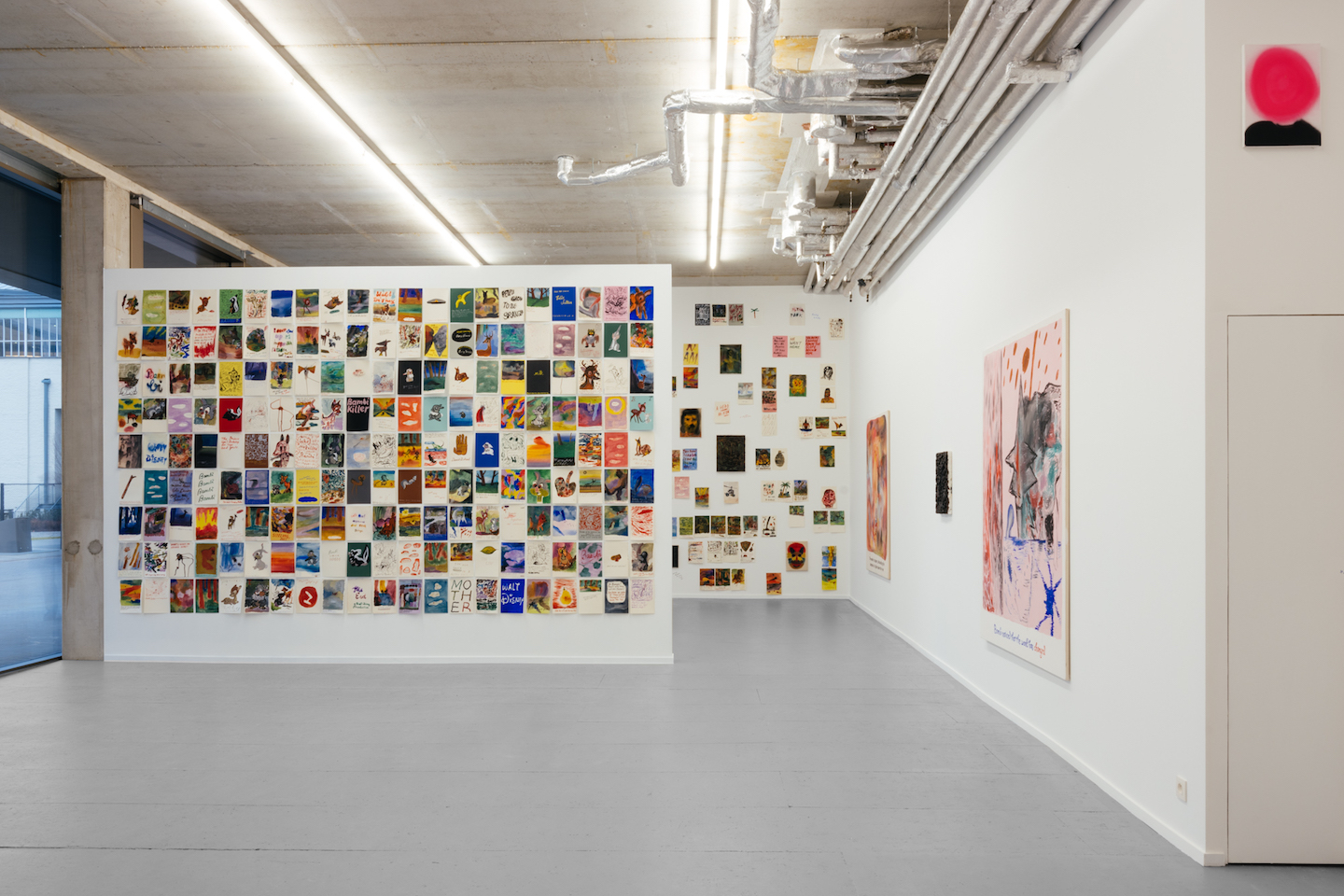 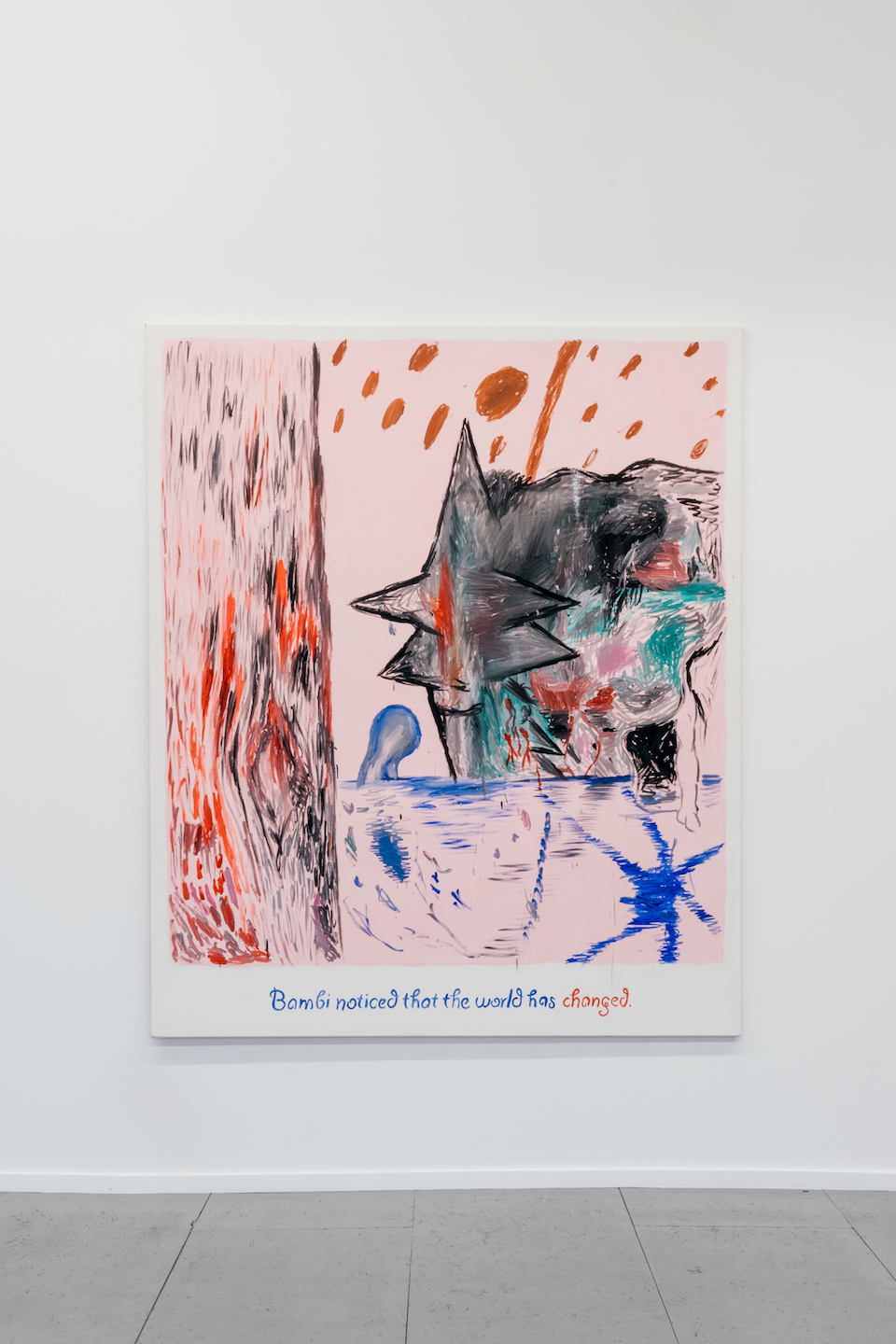 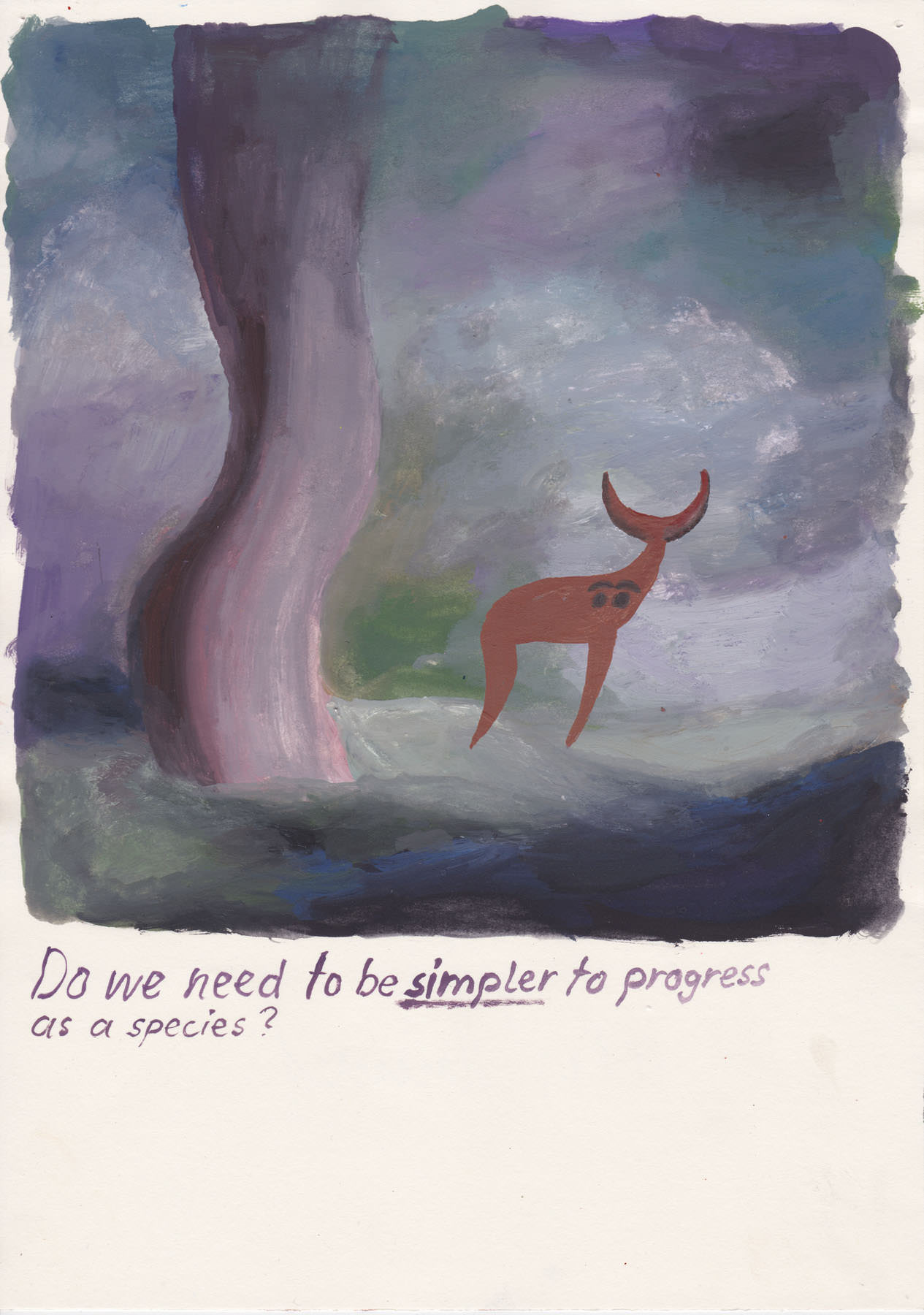 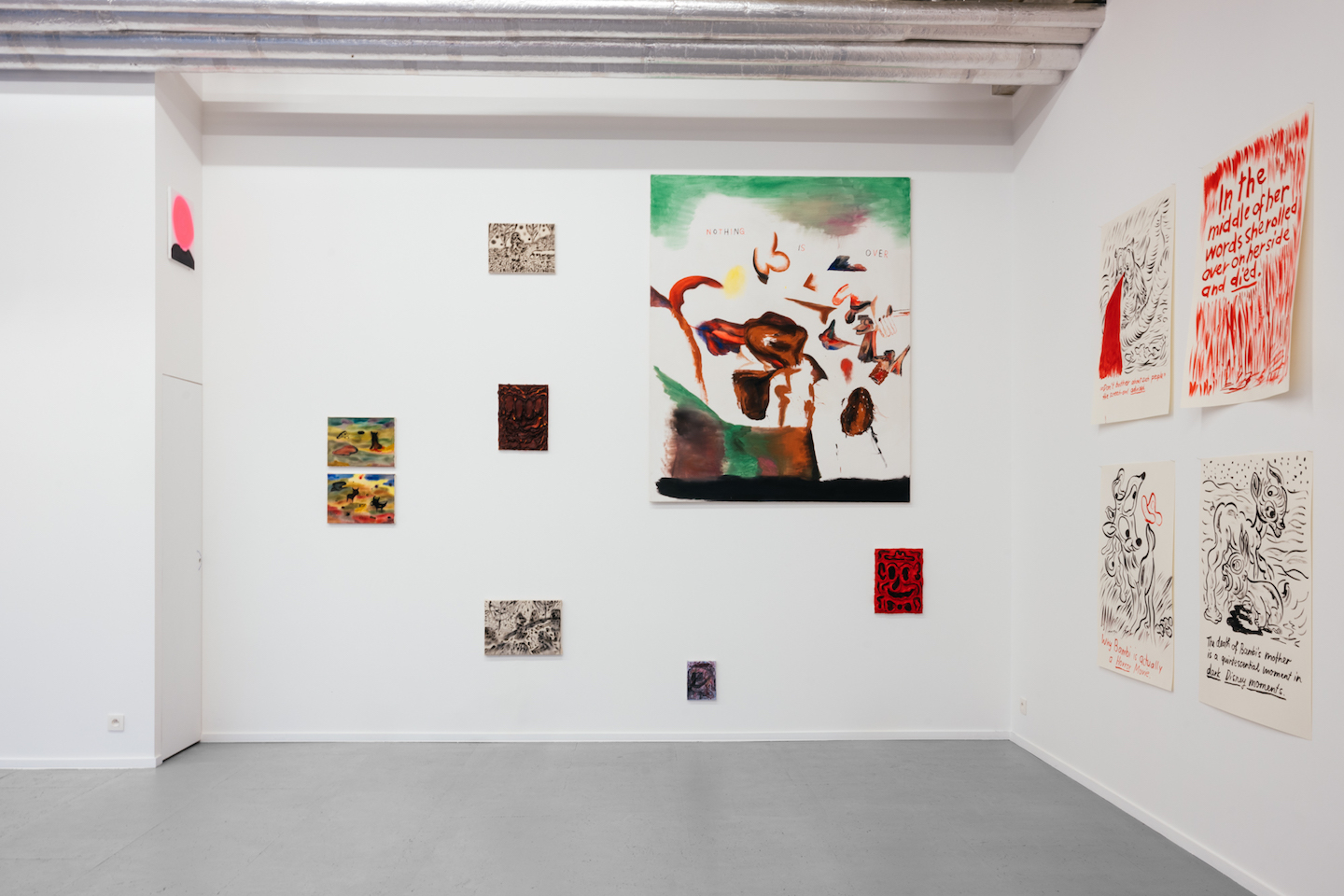 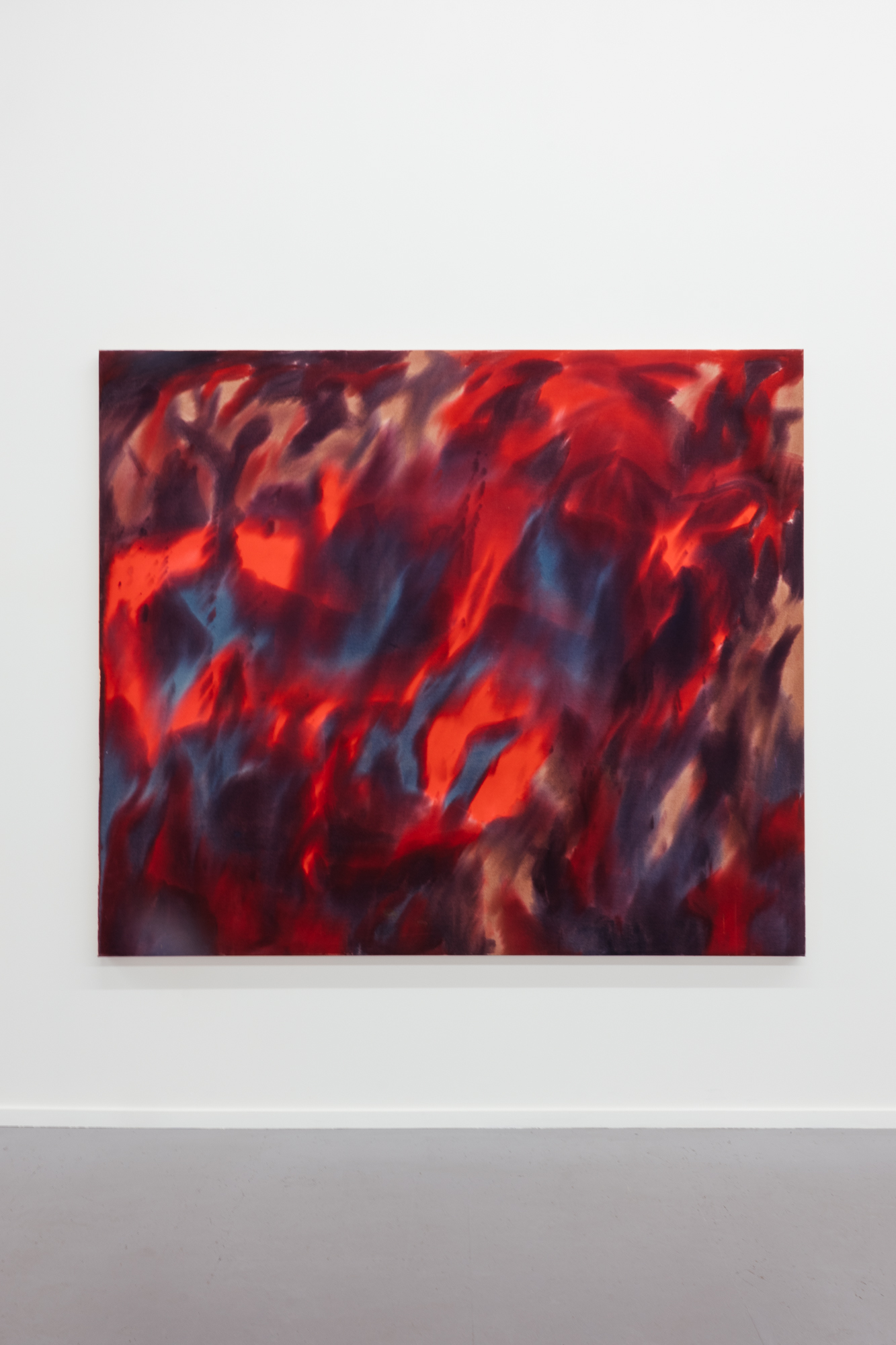 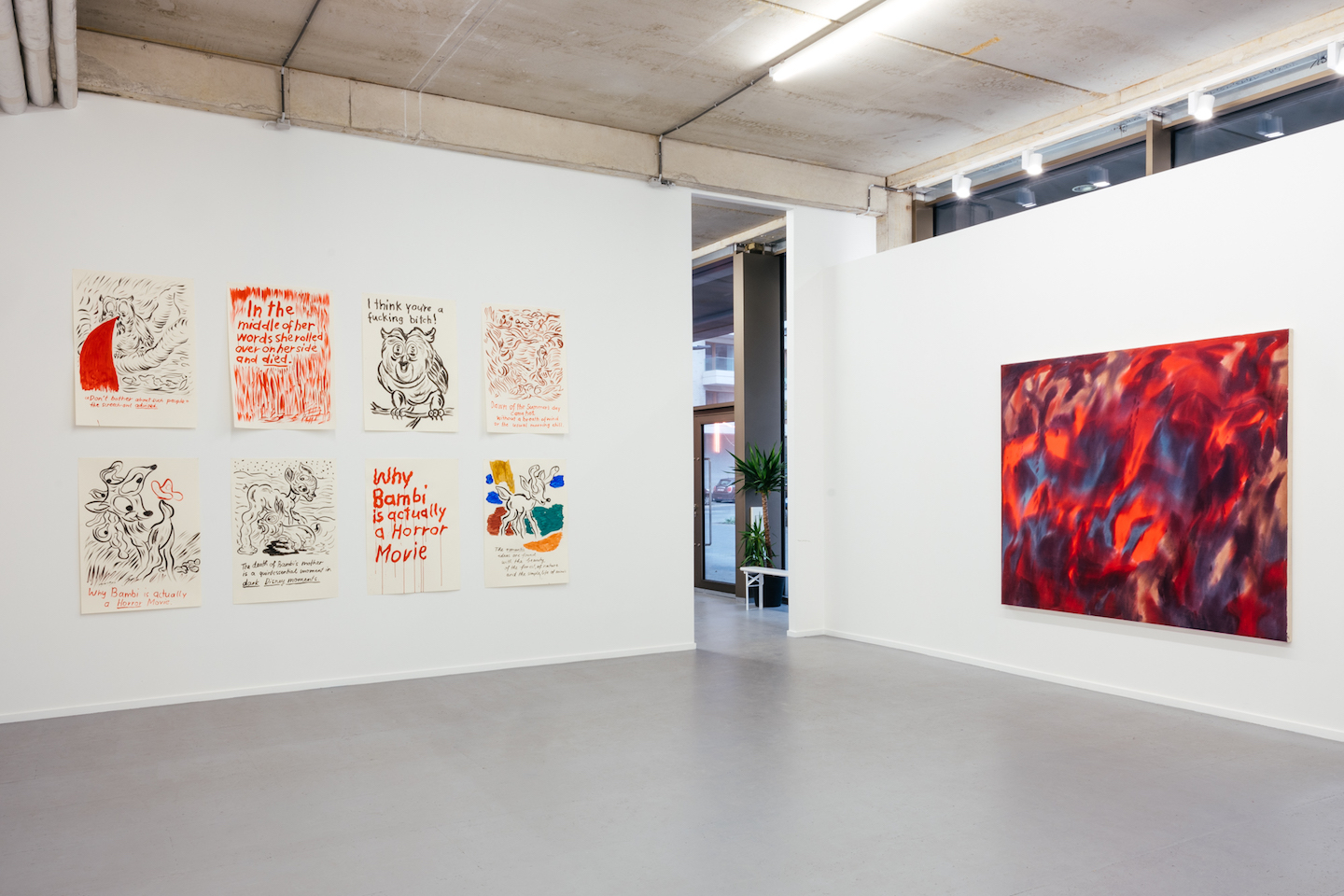 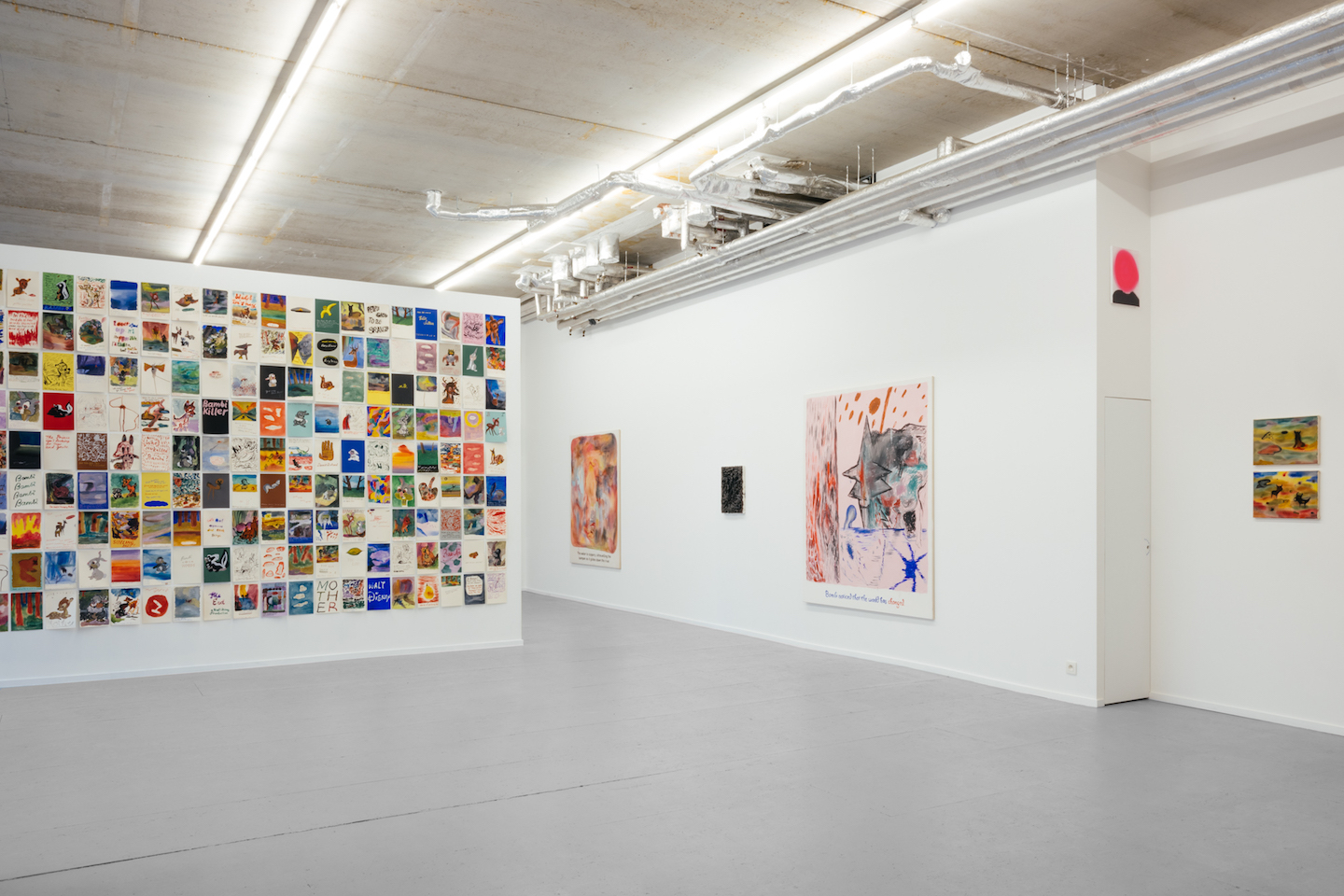 PLUS-ONE gallery presents a solo exhibition with new work on canvas and paper by Switzerland-based artist Beni Bischof. For the exhibition at PLUS-ONE, Bischof takes the iconographic figures Rambo and Bambi as a starting point. He watched both the film Rambo II (George P. Cosmatos, 1985) and Bambi (Walt Disney, 1942) over and over again while sitting in front of the TV and painting hundreds of works. From hand-written artworks to loose watercolour figures and more abstract shapes, the exhibition is an entertaining and unique interpretation of these two iconic films.

Bischof’s work is funny but disturbing at the same time. With a cynical humor and a clear preference for chaos, the artist, through intuitive gestures, manipulates and modifies the context of existing things, creating a playful and absurd ‘cosmos’. His work addresses not only pop and underground current themes, but also political matters and social critiques, presented through his interest in anti-aesthetics, deconstruction, absurdity, and destroyed beauty.

Both the Bambi and the Rambo series of paintings are provided with captions which can be read as mere jokes, but also as commentaries on the state of our current society. Bischof closely observes his environment and digests the abundance of information that he is confronted with on a daily basis by processing it in his work.

Rambo II
Bischof is known for his ability to translate existing images and texts in new ways by finding inspiration in the everyday through novels, fashion mags, adverts and films. His attraction to the well-known film series, which stars meathead Sylvester Stallone as a specially skilled yet troubled Vietnam War veteran, was the visceral nature of the series and in particular the visual material the second instalment offered. For Bischof, Rambo II covers all stereotypes.

Bambi
Bambi has long been a cross-cultural symbol: birth, life, death, rebirth, the endless circle of life. Bambi became synonymous and moral pioneer for the good and pure in man. A desirable role model for generations, regardless of culture and religion. But the name Bambi is repeatedly misappropriated: the annual awarded German media and television prize bears the name Bambi. As a trophy for the achievements the winner receives a golden fawn. Also, thousands nurseries, baby shops or hotels are called Bambi. In the 1970s, the image of the innocent fawn became quite battered. Russ Meyer, the big-breasted Sexplotation films cult figure, was one of the first who destroyed Bambi as a symbol of the innocent and good. A little later, the punk group The Sex Pistols, with manager Malcolm McLaren starred in The Great Rock and Roll Swindle "subversively asked the question," Who killed Bambi?