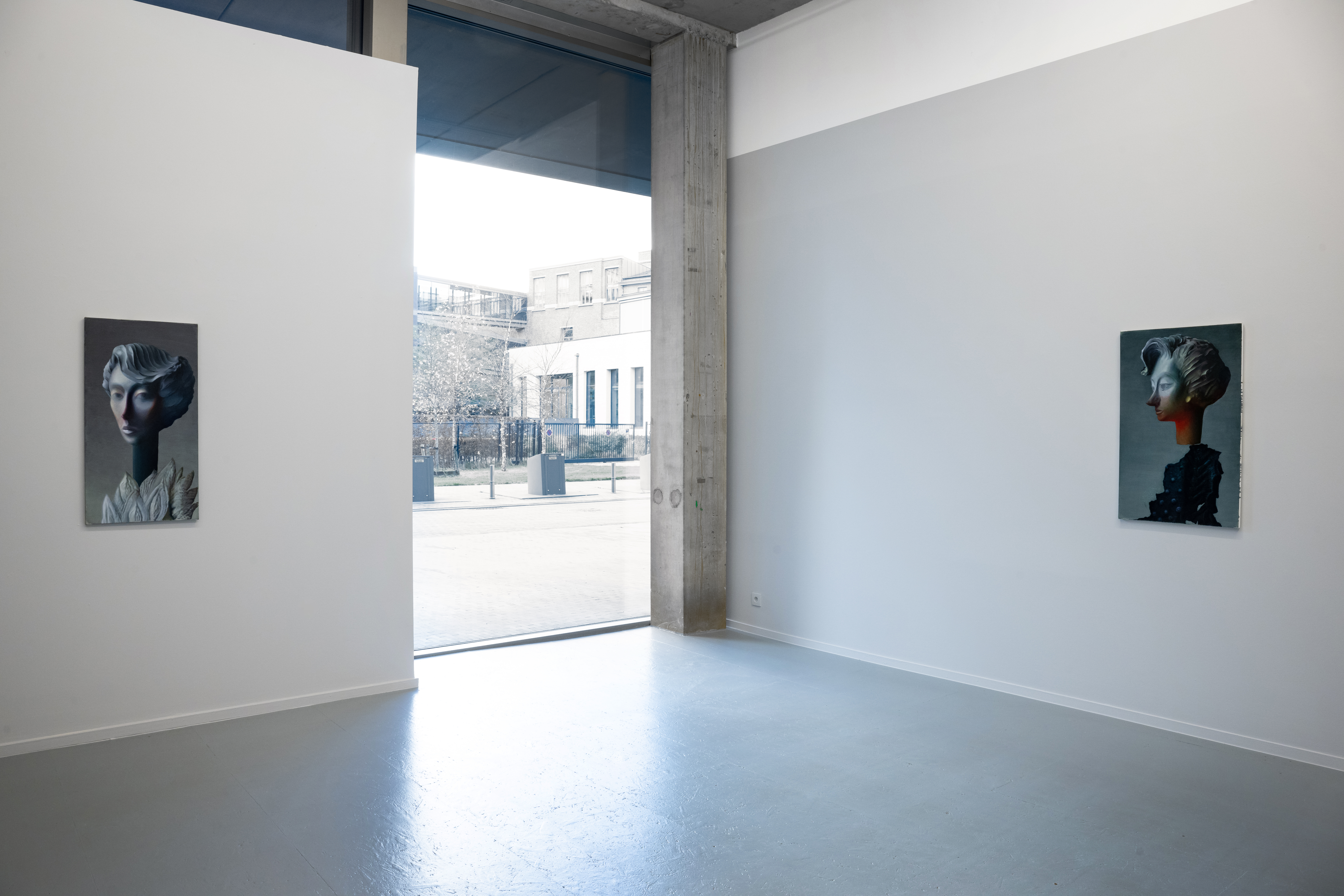 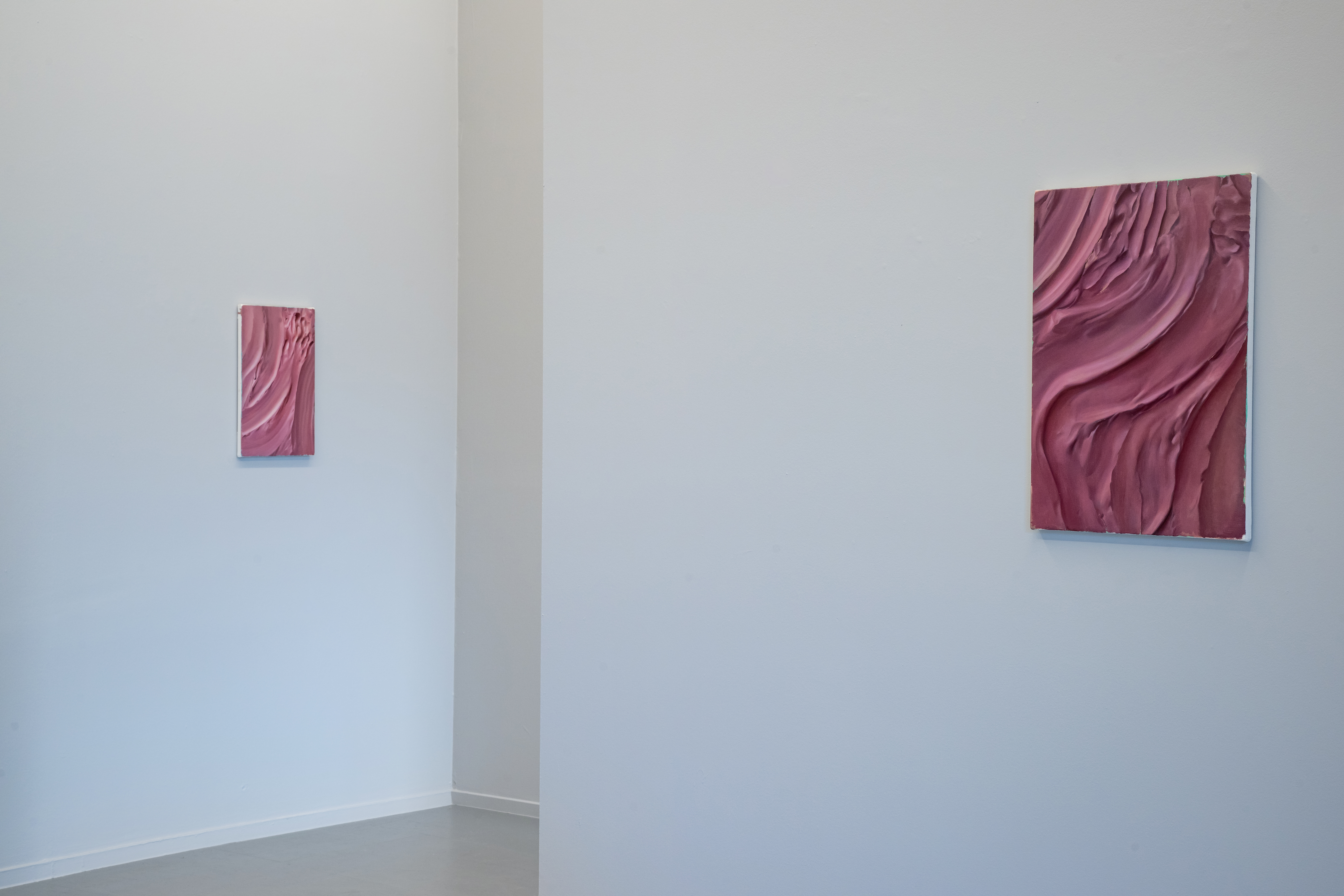 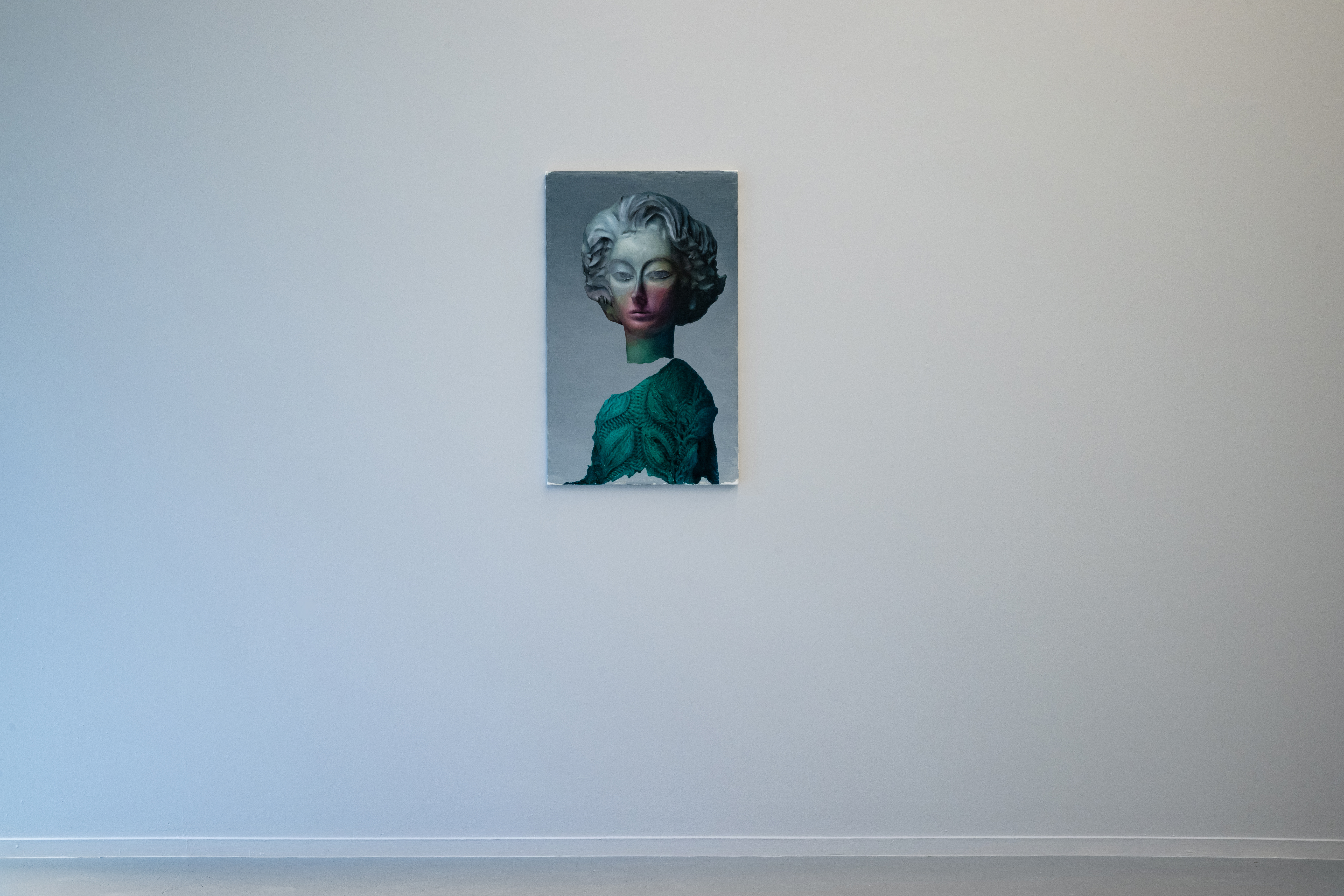 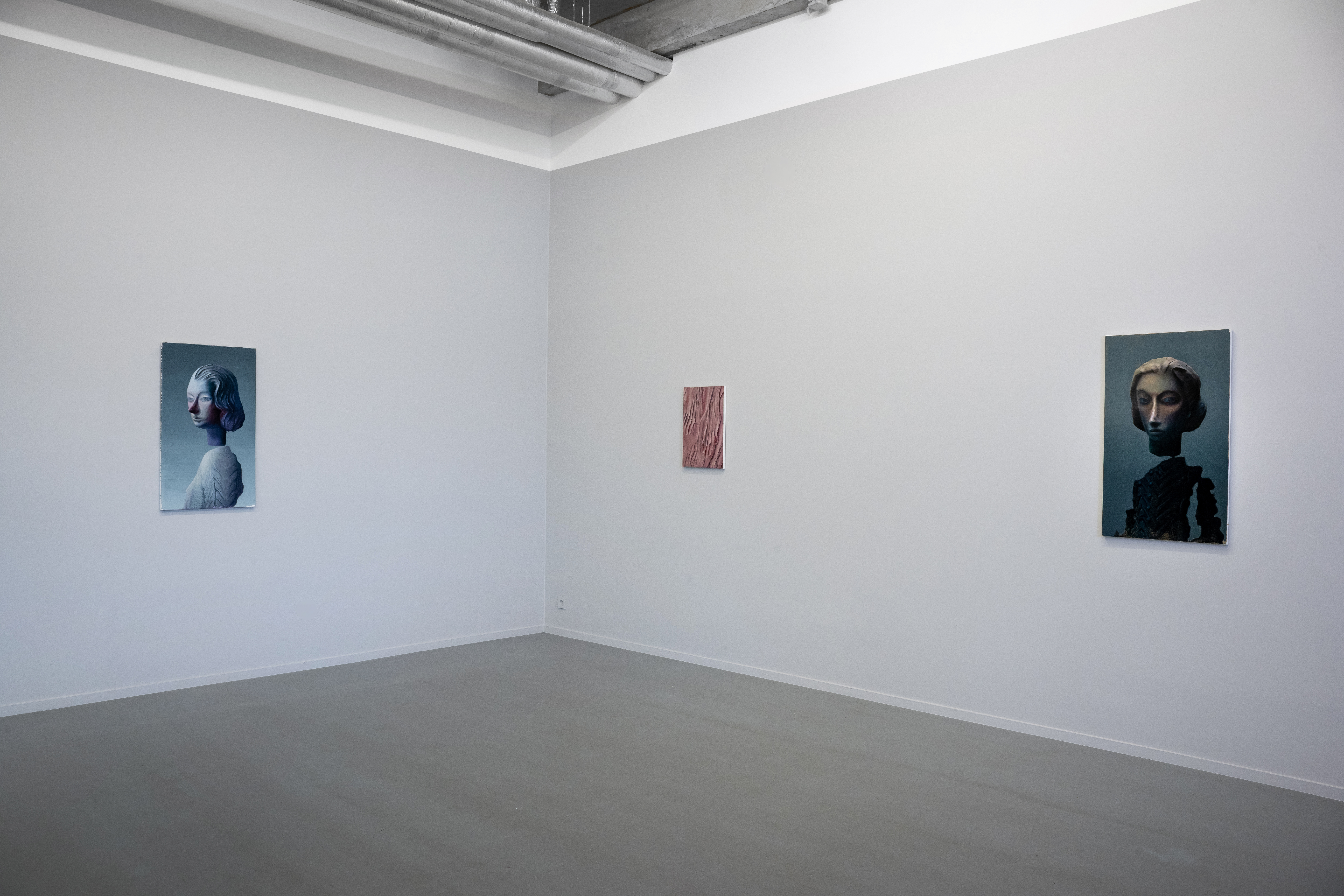 In looking at Damien Meade’s recent work we are reminded that there is a cleaving at the heart of painting. Painting is not singular, it is noun (the thing of it) and it is verb (the doing of it); it is object and it is process. Cleaving is a helpful term here, meaning equally to split apart, and counterintuitively, to join together. So, while each of these paintings (objects) is self-evidently the result of painting (process), reflexively the paintings (objects) also serve incrementally to reveal the sequence of touches and decisions that constitute their painting (process). The works in the gallery invite us to look questioningly and hungrily, and in so doing, our looking echoes the way that the painter builds, scrutinises, and transforms his subjects in the studio.

The dynamic negotiation between the twin activities of making and looking has many further parallels which permeate these paintings. There is a live and inconclusive to-and-fro between image and object, description and embodiment, deep history and (im)possible future(s), growth and decay, presence and absence, seduction and repulsion, and so on.

The works in this exhibition fall into two distinct series, portrait-type paintings and monochrome- type paintings, and yet in both cases, the subject (the thing being depicted) is itself made in the studio (through clay modelling, photo collage and digital editing) in order to then be painted. In Untitled (DM2203) 2022 the runnels gouged by the sculptor’s fingers through the model’s bobbed hair mimic her own habitual action of sweeping-back her locks. Highlights articulating the rough clay relief are momentarily confused with patination scuffing the canvas surface. In looking closely, we see these signs of time-passing are simultaneously the result of leaving the painting incrementally unfinished, and of painting-in those signs of wear and tear. Whether the painting is approaching completeness or softly dissolving before us is purposefully unclear. Uncertainty is a gift from the painter to the looker, and it should not be confused with arbitrariness. The great curving sweep of hair emanating from the model’s temple is mirrored in the shape of the brow and nose, causing the nose to be pulled to a sharp peak. The underside of the nose is a dense wine-coloured darkness which echoes a similar shadow where a weight of hair curtains the jawline. Here the red tint becomes a blackness of microscopic cosmic infinity, revealed to us as a speculative space to become lost in, in the same way that other worlds are revealed by the drawing back of curtains in Velazquez’ The Spinners or Vermeer’s The Allegory of Painting. As we are looking, wondering, the model’s eyes gaze too, into middle distance, unfocussed, and suggest a moment of internalised introspection. Looking from the right eye with its light-tipped angular lids, to the soft sfumato left eye, we realise that in consolidating this head into whole we lookers have relied on our pattern- recognition brain to dance too lightly over these moments of disconnection before us. These eyes barely belong to the same head, and yet we so badly want to believe that they do.

Throughout these paintings the heads hover above twisting torsos and immediately absorb the viewer in their relationships between facture in clay (and through subsequent digital processes), and in paint, and latterly in the picture-building achieved by active looking. Their elongated format serves to hide-in-plain-sight even stranger transformations that occur at the paintings’ extremities. In Untitled (DM2205) 2022 the model’s chest and arm seem to have been discovered, rather than constructed, like the way Ernst reveals his apocalyptic landscape in Europe After the Rain. As this puckering paint forges contours and so begins to coalesce form, details emerge. In many of these portraits, the figures wear cable knit sweaters. These aren’t the cosy knitwear of 1970s suburban hippiedom however, as the stitches are as likely to morph and mutate into scuttling beetles, or slippery fish scales, or chainmail. These peripheral transformations offer yet more unresolvable uncertainties as the viewer’s inquisitive gaze navigates the rhythms and counterpoints of each painting.

The mobile gaze is equally questioning as it navigates the slab-like surfaces of this exhibition’s monochrome-type paintings. Where the portrait-type paintings employ emptiness from which (and into which) the subject evolves (and dissolves), the monochromes in their edge-to-edge pink density provide an unrelenting mass from which space is excavated as the sculptor’s fingers push into its sticky depths. This opening-up of space within matter is then re-made with brush and paint. Clay is an earthy particulate bound into a thick medium, and so too is oil paint. The mimetic relationship of paint and clay expands the exploratory gaze into a haptic gaze. The softness and squelchy wetness as the sculptor’s fingers push into the clay body is felt by the eye as it traces each pull of the painter’s brush across the surface.

Meade’s new works separate and meld the objectness of painting from-and-with the process of painting, and in so doing they foreground the delight and agency of looking at painting. As we indexically read the traces of actions accreted onto the painting surface, and weave into that membrane the colliding histories and signs conjured by the image, so too do we achieve a kind of speculative way of being with the painting. Because the painter holds all dynamic possibilities in play, not allowing the works to settle into becoming a reductive, singular thing, looking retains the thrill of making. With each new gaze into and across the painting, it comes to life again;endlessly becoming something, and each new something is subtly and strangely transformed.