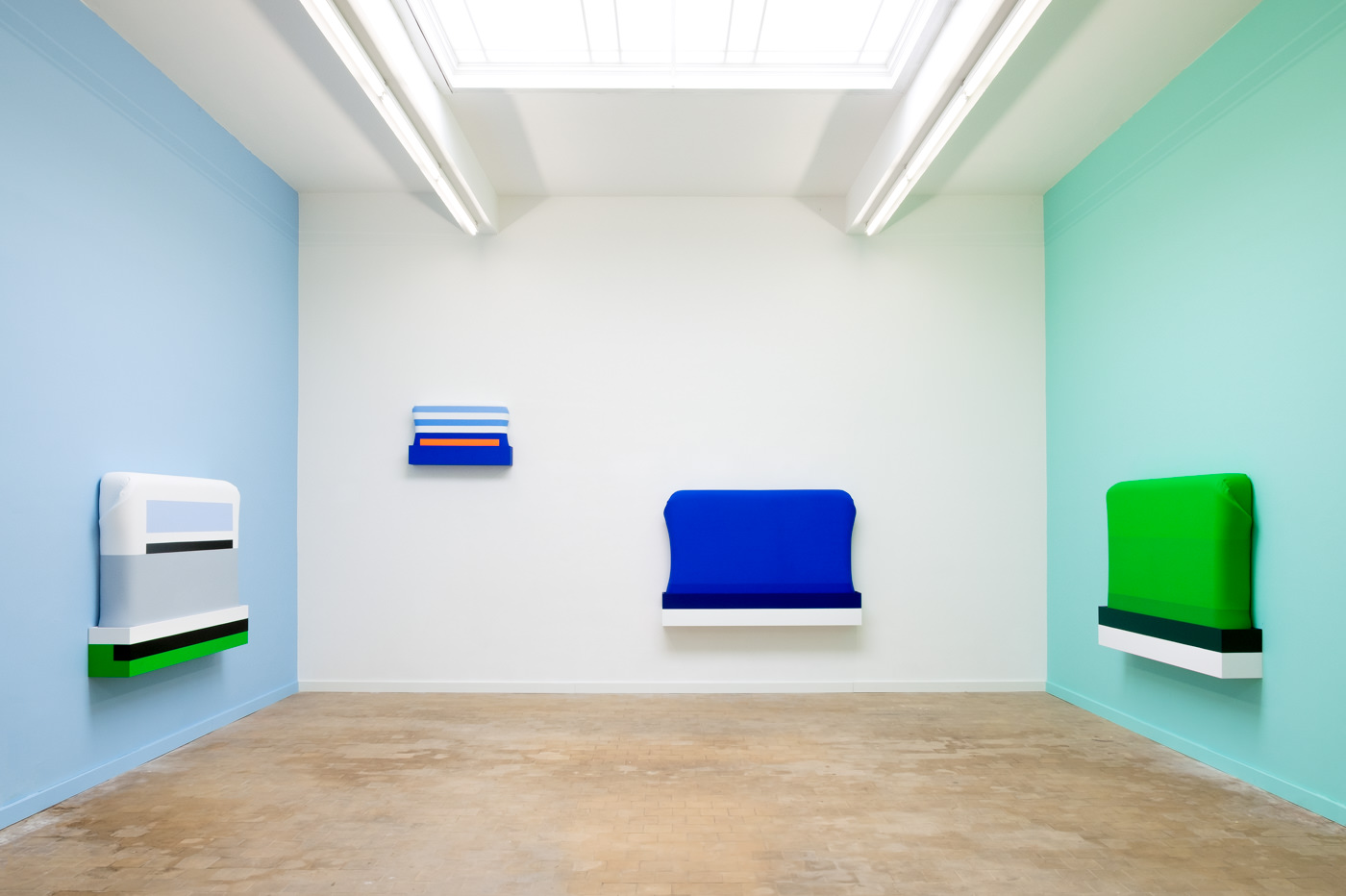 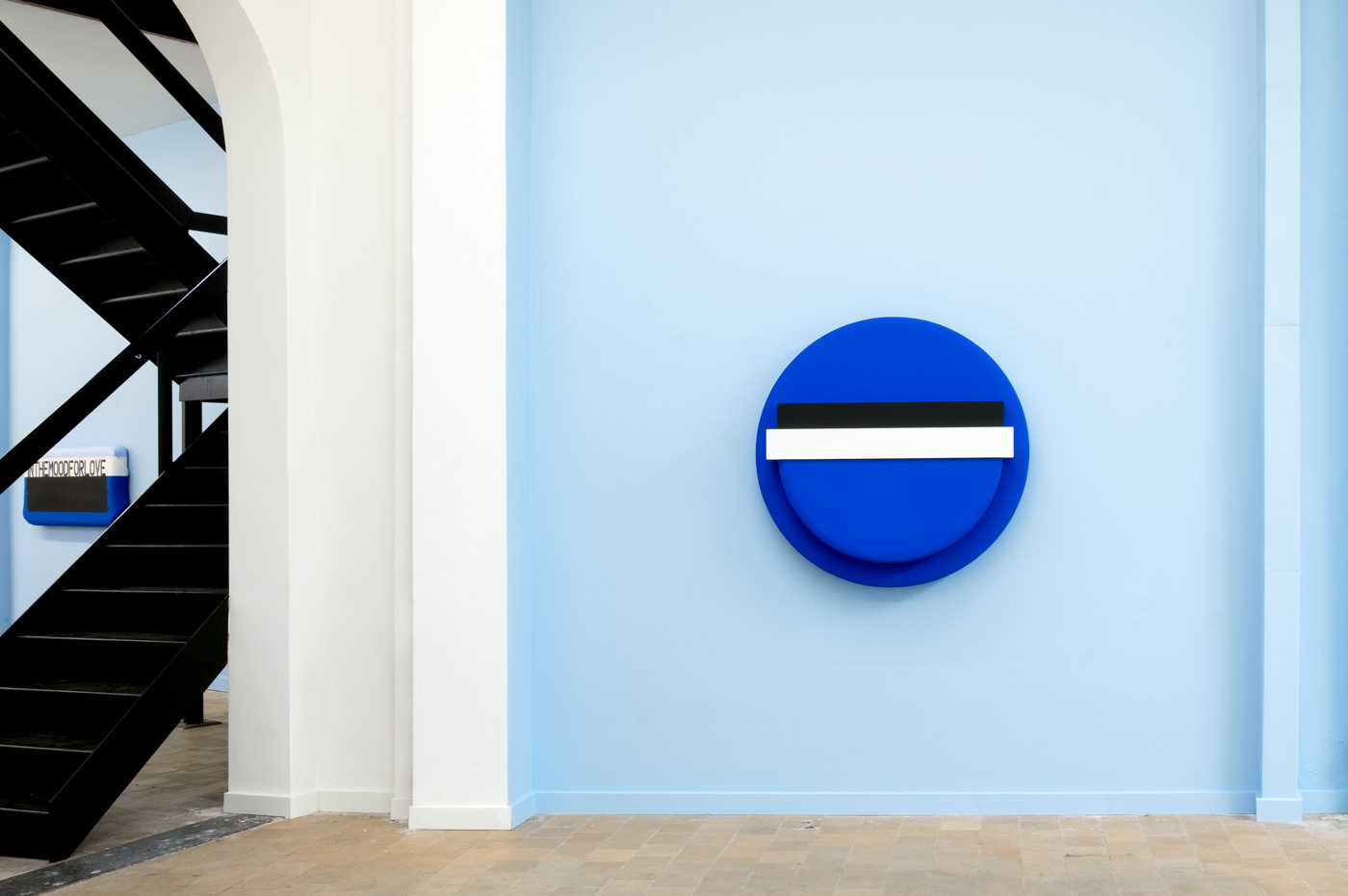 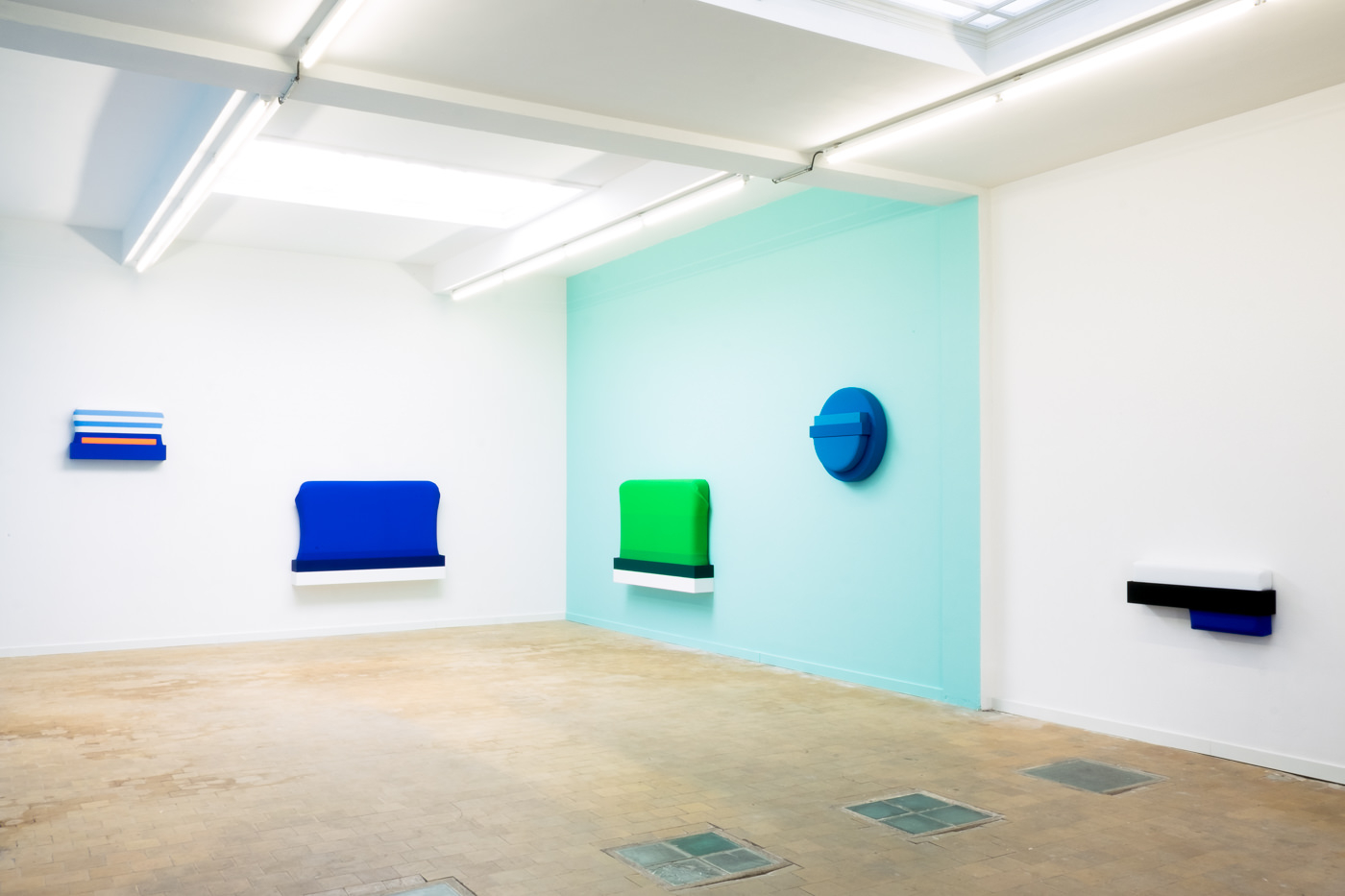 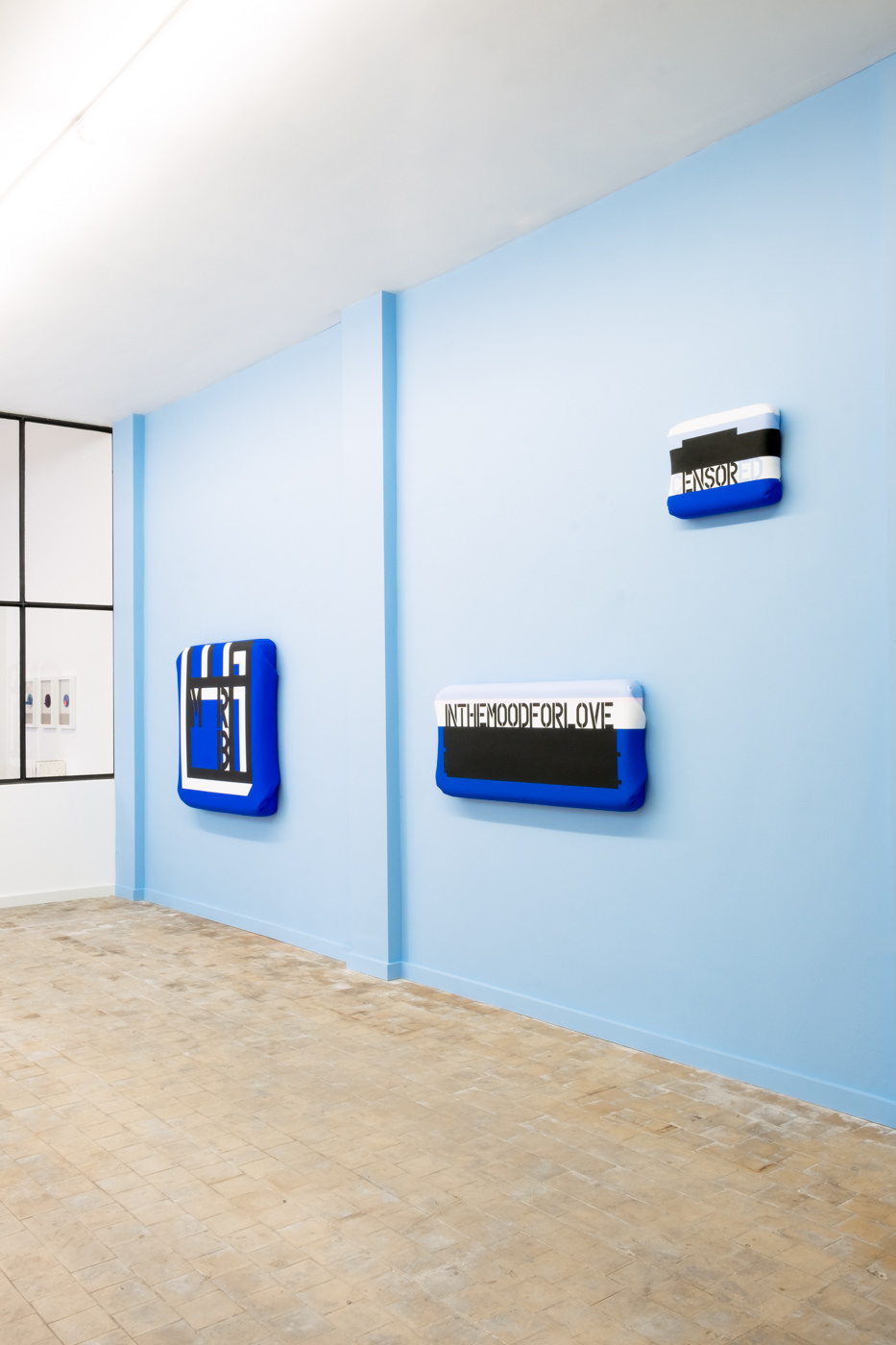 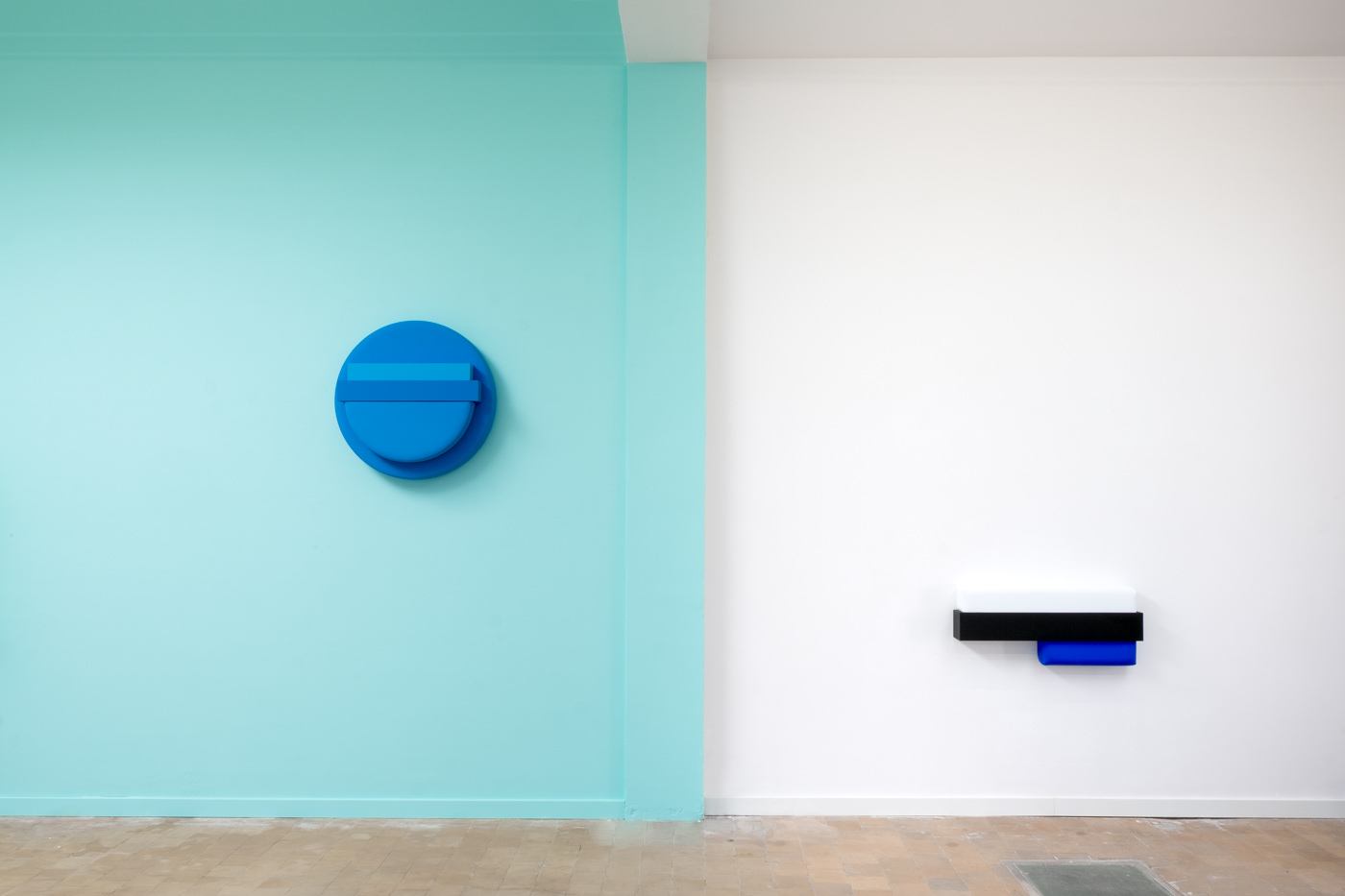 For the solo exhibition ‘Sub.Titled’ at PLUS-ONE, Sergio De Beukelaer (BE, b. 1971) began with an homage to Yves Klein and his personal quest for ‘a blue void’ and how to fill it.

As a starting point, ‘the blue’ was linked to his girlfriend and muse Marianne Rydberg, and consequently this ‘blue’ or rather these ‘blues’ were encoded as Marianne.RydBerg.Blue (MRB.2016). The use of different blue tones alludes to portraits according to the idea of ‘painter and model’ – a classic motif in art, particularly painting – construed in the absolute here and now, built up in a schematic typography as a kind of advertisement (Publicity Abstraction, 2015).

The works exhibited serve as an advertisement or propaganda for painting; colours and moods clipped from the ‘Color Field’ paintings of the 1950s and 60s act as a kind of engine block for his fat.canvas works with their greedy furies of colour and form.

The pigmented objects represent boundless exuberance and are usually broken by black and/or white elements as a form of censorship.

In a number of works, the artist has consciously opted for ‘anecdote’, ‘subjectivity’ or the importance of ‘detail’. Detail as a ‘fully-fledged image’, arising from a compulsion for classical and historical accuracy. Precision and geometry as a game, leading to the love of love, colour, line, assembly and visual impact.

MRB radiates enthusiasm and is repeatedly ruptured by obese shapes and the colours used. Black and white are the ‘killjoys’ in the game. In certain works, the blues or greens have been deepened to such an extent that they create a ‘black and white’ effect, which is incorporated as a kind of violation.

The killjoy does not always win: sometimes it is the colour that gains the upper hand. This is monochrome painting as conviction and surrender, pure colour as positive energy.