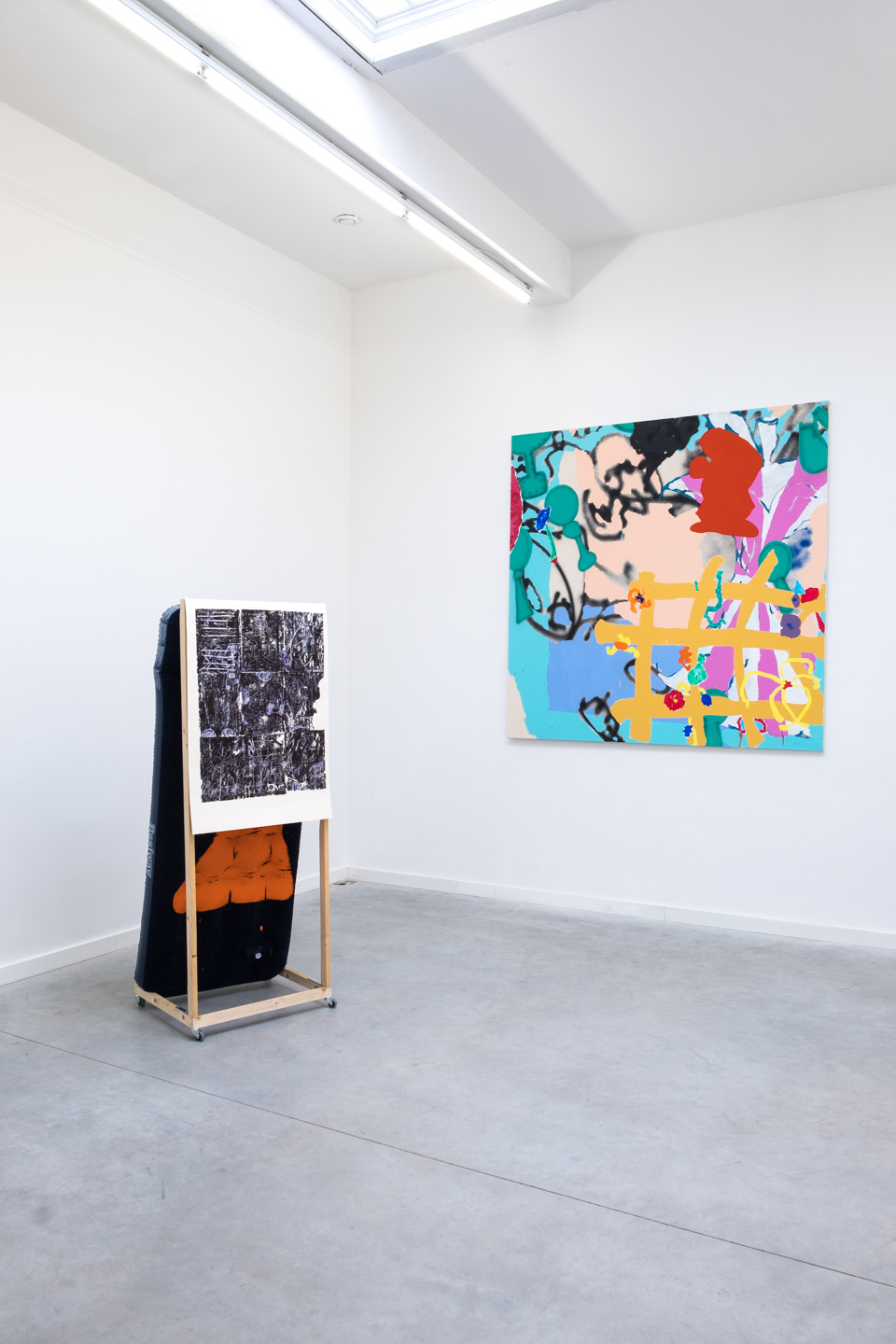 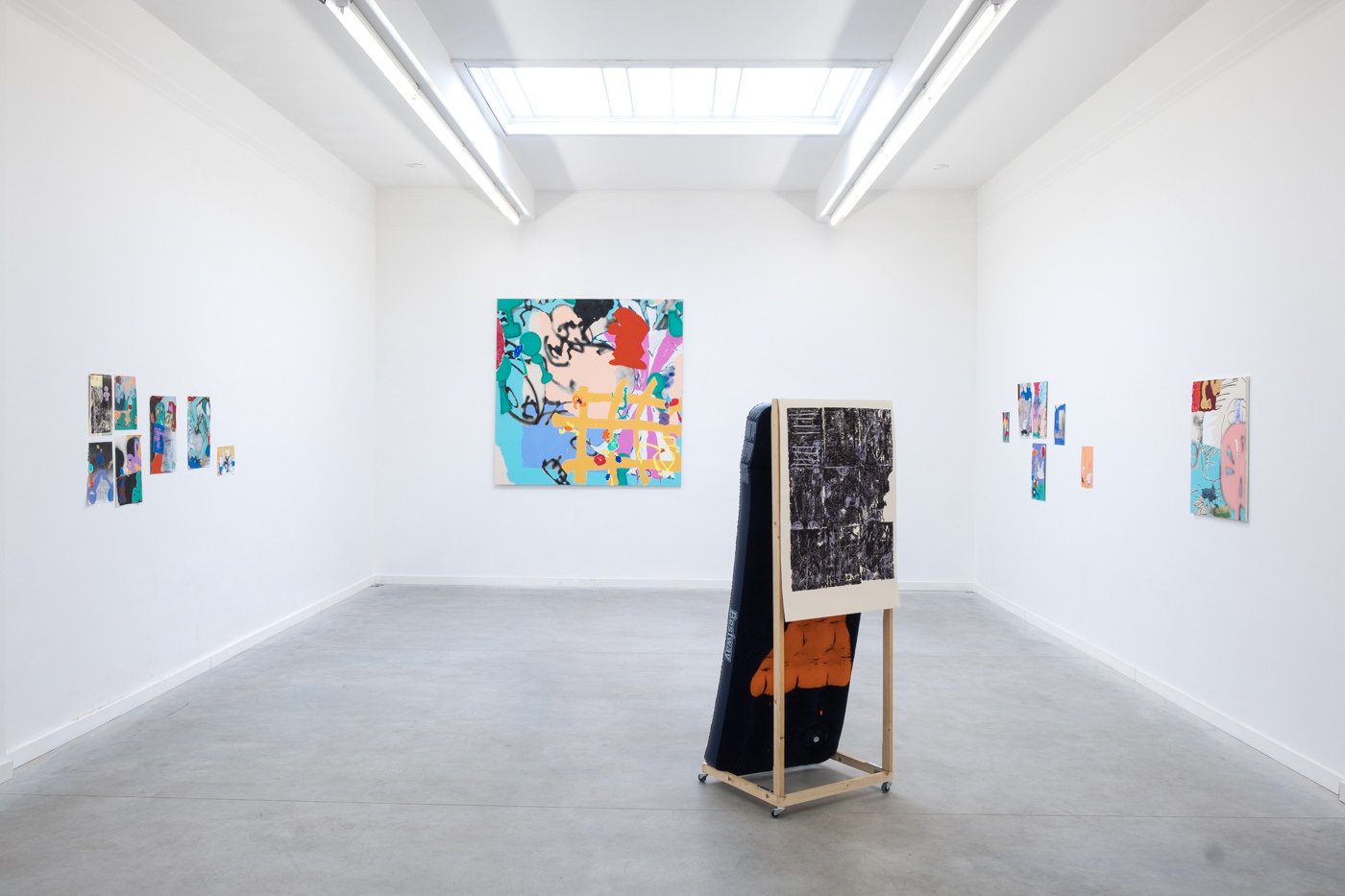 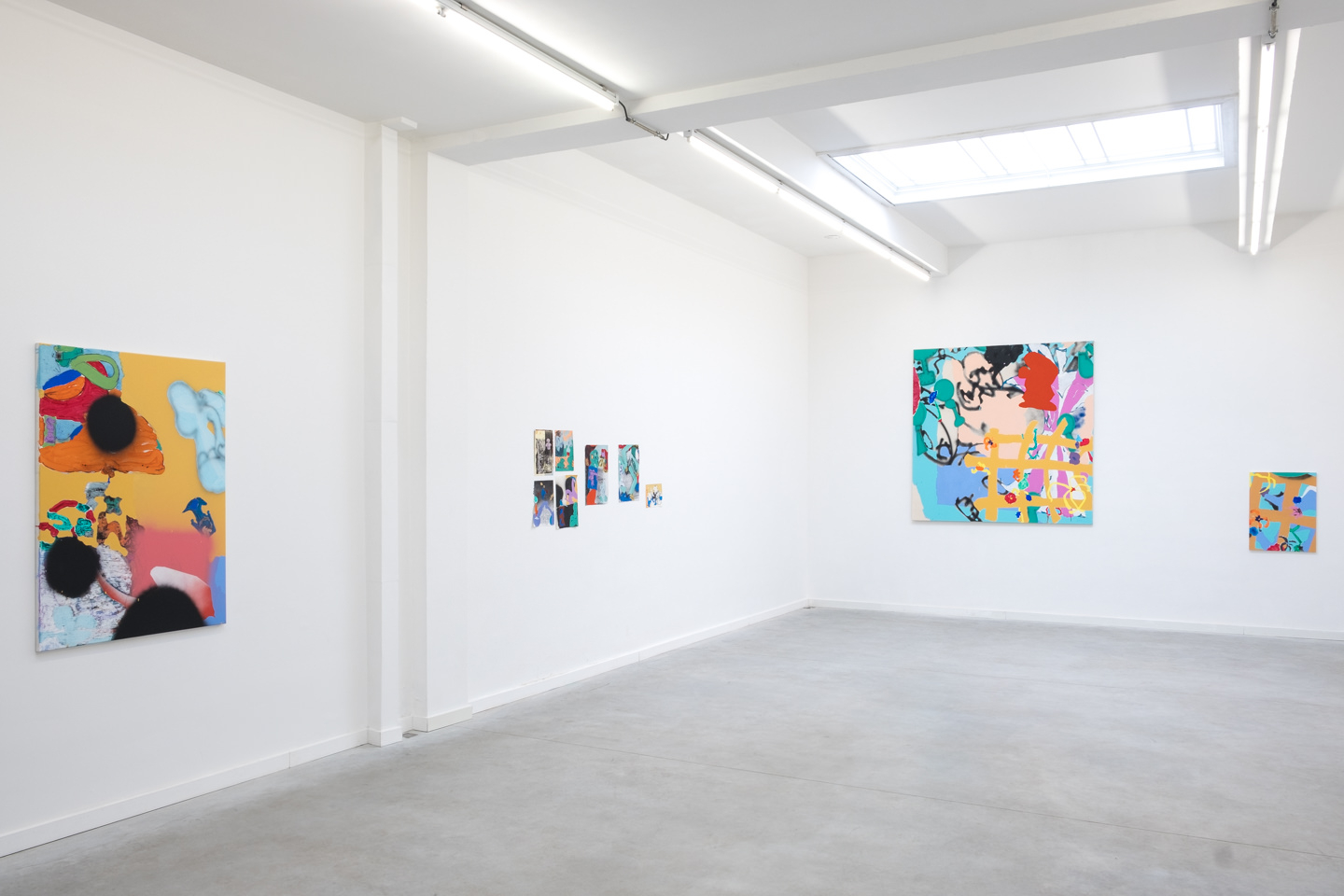 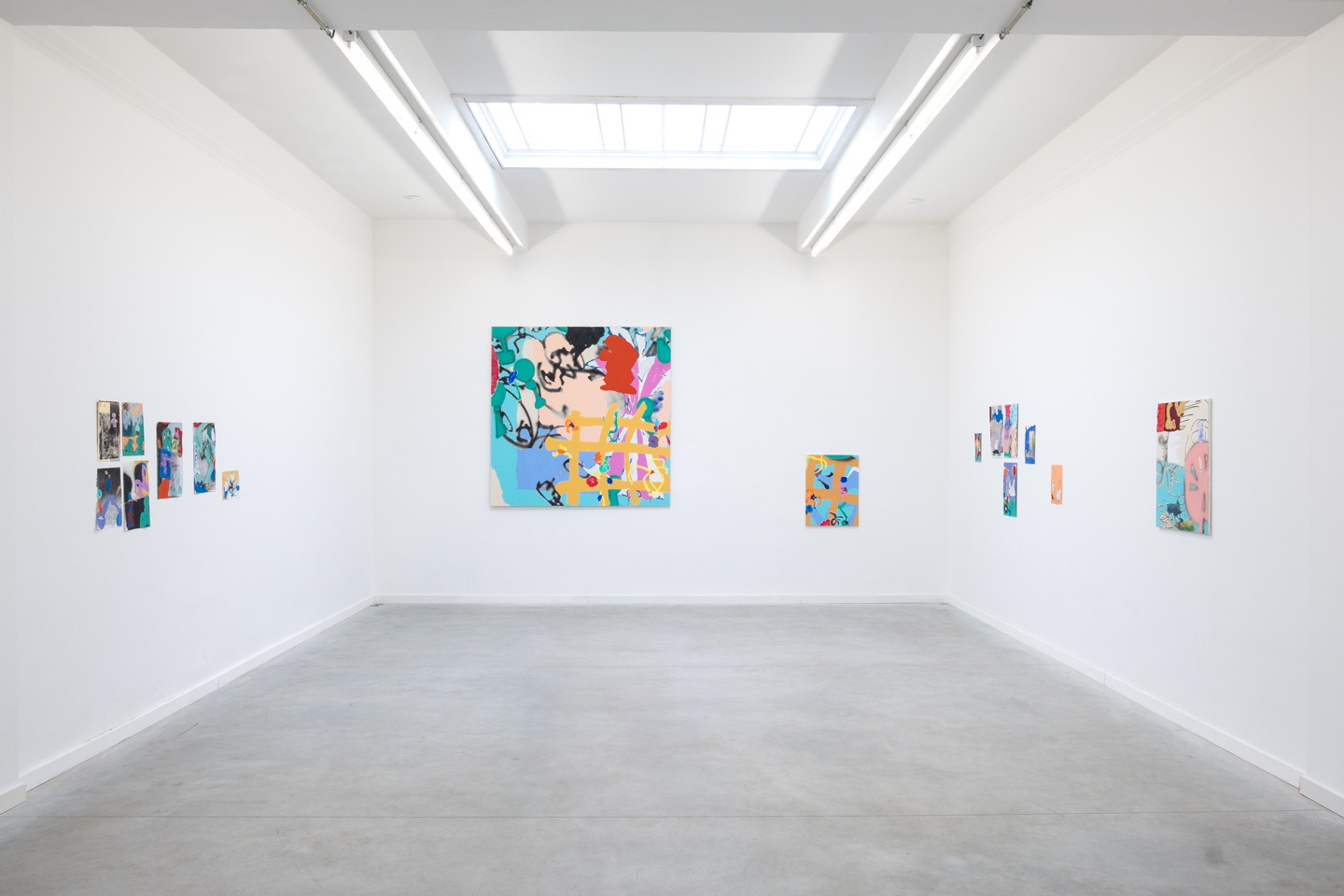 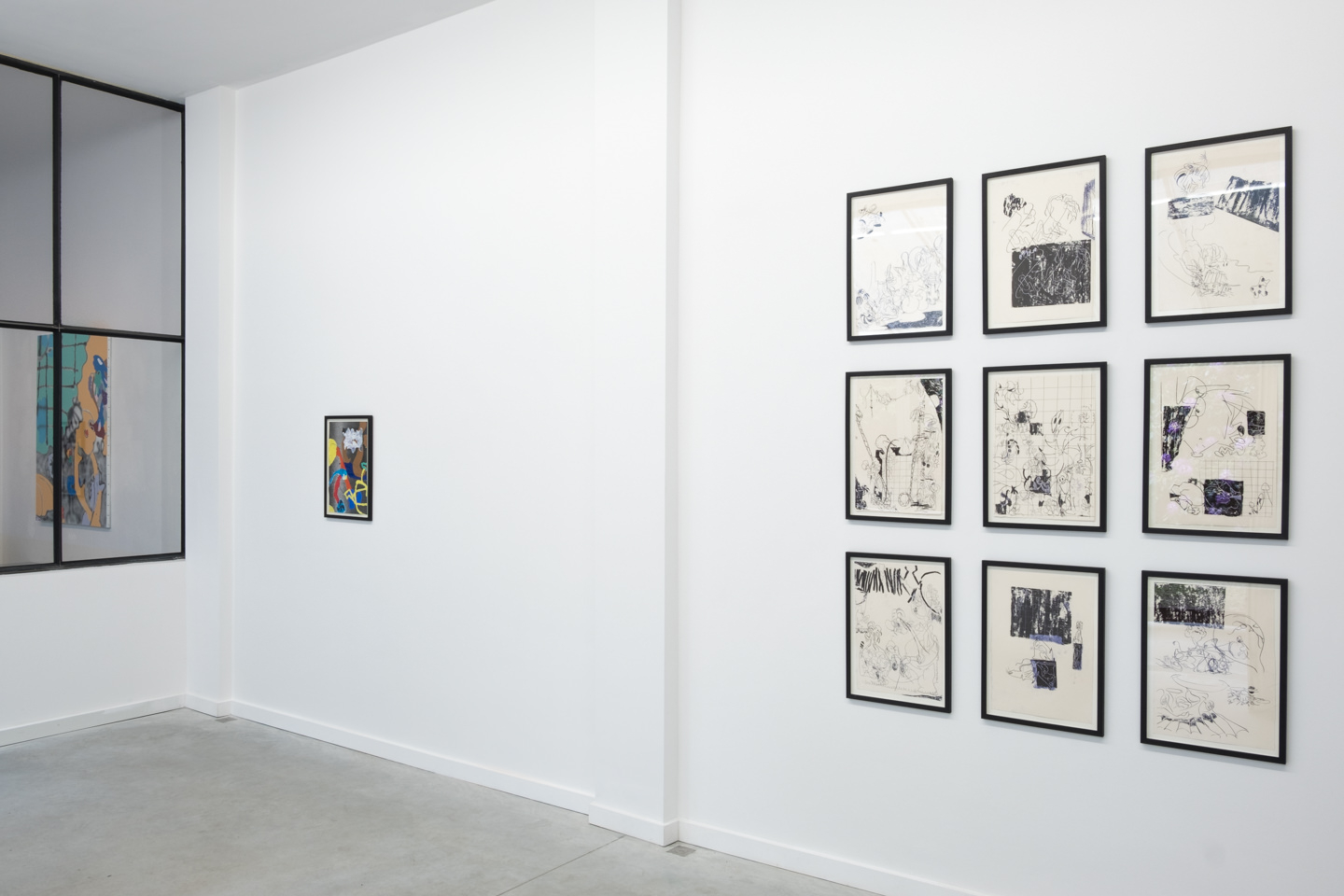 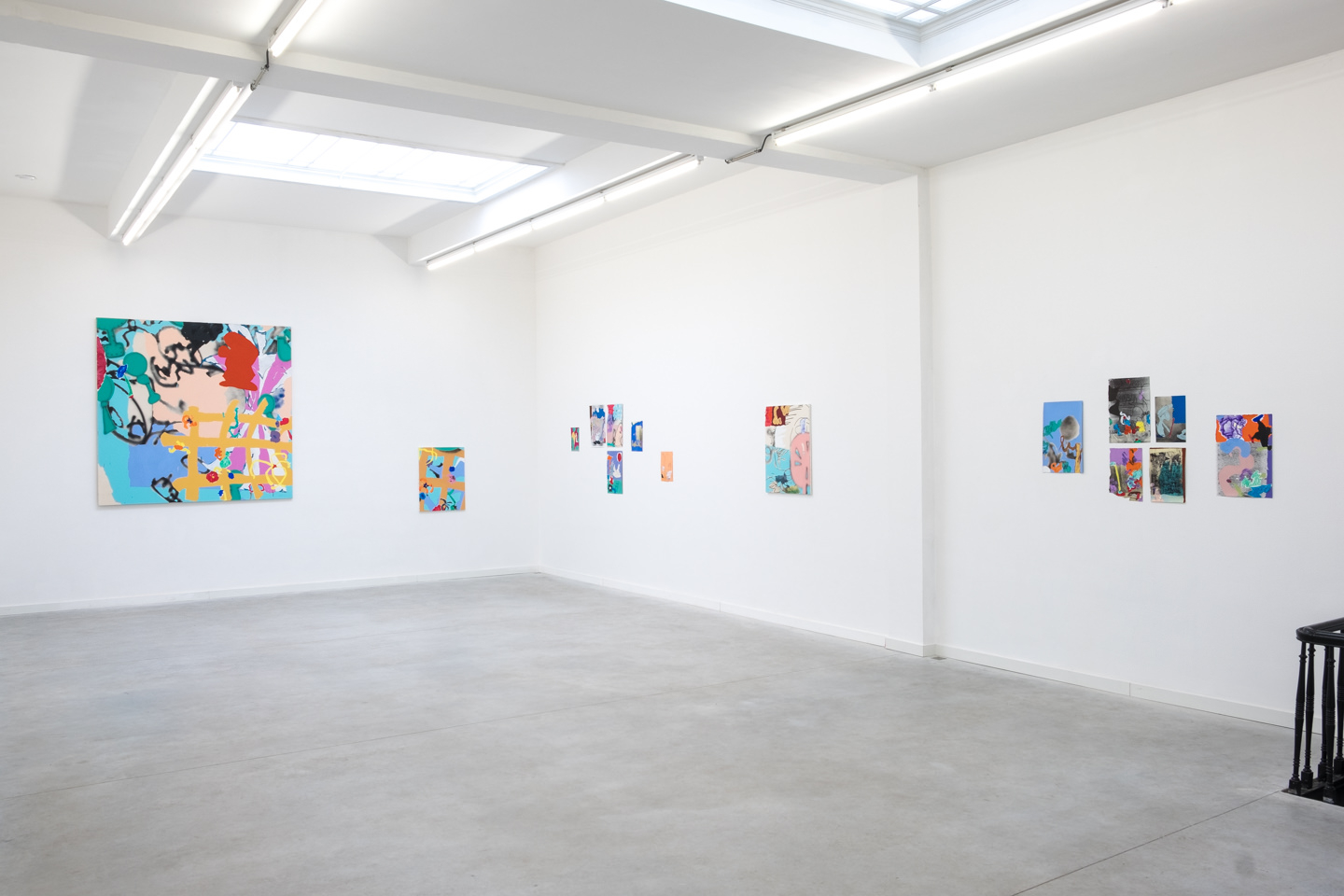 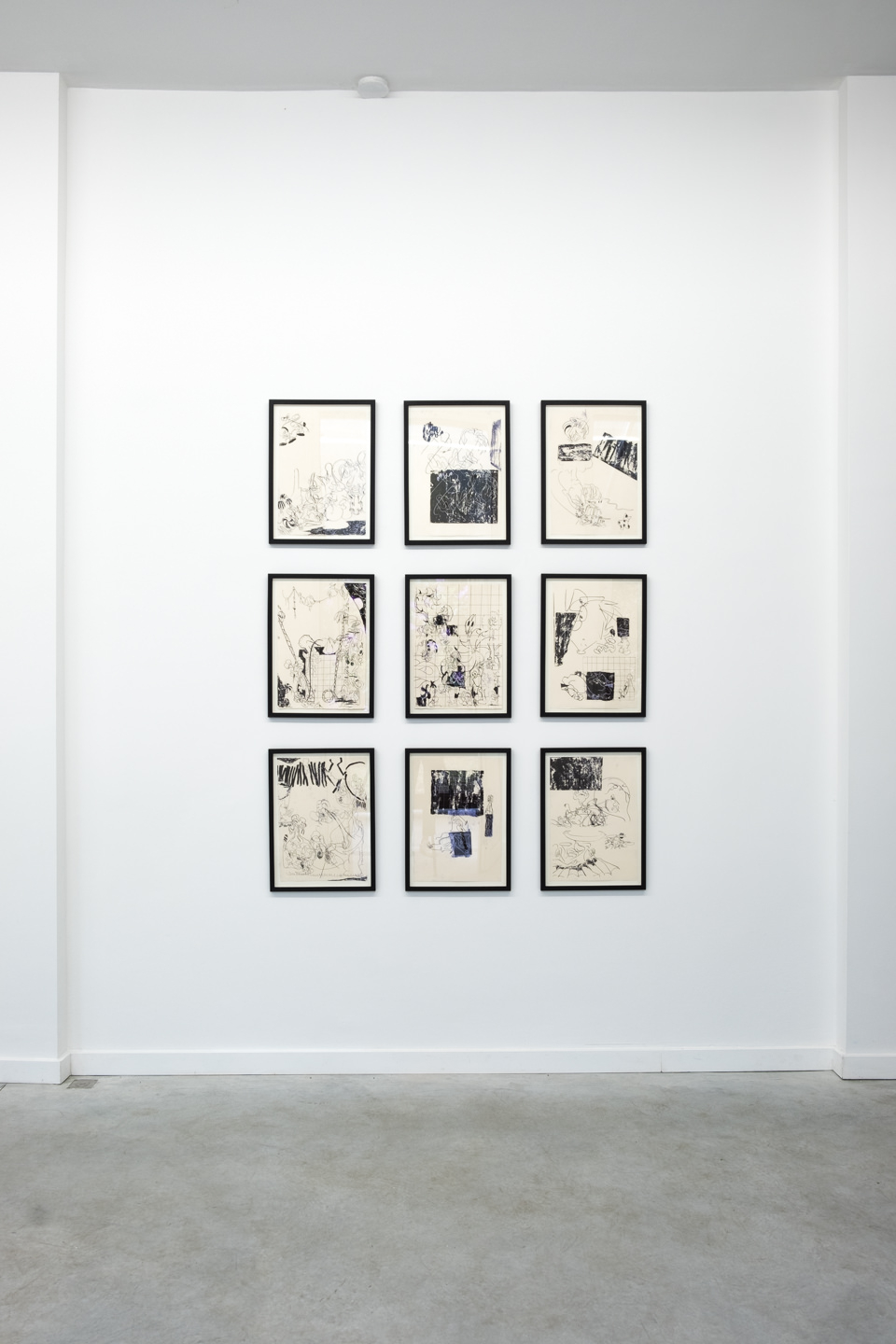 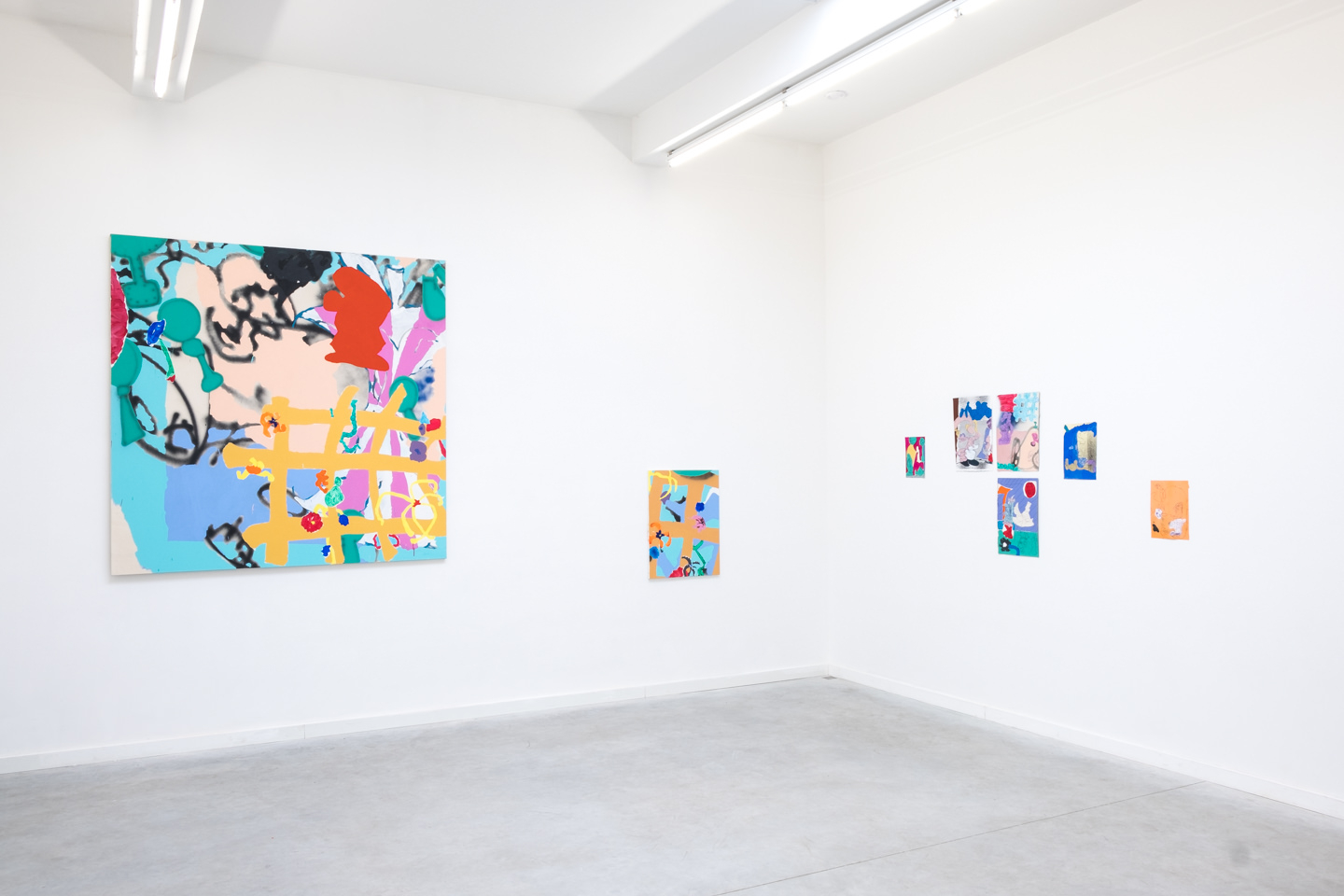 Floating Pictures
“A painting is no longer a construction of colours and lines, but an animal, a night, a cry, a human being. It forms an indivisible whole”, declared Karel Appel, founder of the CoBrA movement and always attentive to the naivity of children’s drawings, to the brutality of art, to the energy at play on the street, where he didn’t hesitate to collect and observe his raw material. The iconography of Antwan Horfee is peopled by chimeras, hallunogenic mushrooms, neo-hippy parasols, hashtags, a tangle of wild, carnivorous vegetation, standing men and flying zombies, gremlins with suspicious airs and contours, fragments of bodies and bygone writing, tiny museum displays, wire fencing and overlapping, purely abstract shapes dictated by the gestures of this artist, who first developed his practice in the action and tension of street graffiti, plunging his work and mind into the trances and fun of howling nights that light up Paris, New York, Japanese cities and Philippe Druillet’s work. The invention of paint in tubes allowed painters to seek new impressions by painting in front of landscape. That of spray painting – instant paint, toxic, with no scope for alteration – has allowed a whole generation to paint directly on landscape. Before being a work of art, Horfee’s work is first and foremost an attitude: an attempt to create his own independent, collective ecosystem. To get out of the frame and cross borders, get out of the boxes, pigeon holes, of comic strip, canvas and studio, abstraction and figuration, pop and high-brow, mainstream and underground, black and white and colour. To break the codes and labels that confine artists while permanently questioning his own faculties and language tics. A visit to his studio in the industrial no man’s land by the Ourcq Canal in northern Paris suffices to understand what makes his character tick: the first touches are random, dictated by amusement, the pleasure of a stroke, and corrosive irony. Antwan Horfee causes accidents in order to make things difficult for himself and find his own solutions. In this way he elaborates a painting of mistakes, of amusement and the incidental: a painting of glitches. “Like Freud, tracing the unconscious in the cracks and stumbling blocks of language, (...) it is in the failures and ‘slips’of the image that one is likely to brush up against a form of truth.” According to his terms, Horfee elaborates a “painting of intention”, as opposed to a “mysterious painting”, which takes the biscuit for this artist whose pseudonym borrows the name of the founder of the mysteries of Eleusis and Dionysos. Hence the artist for whom the authenticity of his methods is a keystone of his work does not hide the constraints or the artifices of his painting, which is half-naked. He explains:

“I am so bored when I am in control of my ‘art science.’ This show Self X Slalom presents the essential interest I have in the space juggled between the act of drawing (as an excuse to have density of material in the space), and represents Art as a sport to practice everyday, like slaloming is an extreme sport, and slaloming between the accepted by everyone as an image that is ‘ok’ or not . The more time passes, the more your personal projection takes on fresh shapes and you feel rather like the cave man cutting the wood to create his tool, and shape it slowly, or like a futuristic person that has tools to transform matter, fluids and liquids and create new organs for the body or coloured volumes combined together in a space and call it ART. It's only your personal fantasy: to create an environment that completes personal failure or complex relations with the exterior world in order to face it. Both cases are similar, the cave man or the starboy, we need the shape once it is done, to evolve and reach the next important point. This is humans’ historical rhythm. Considering this, art to me HAS to be in movement, go outside of the common understanding step. It HAS to go beyond this point to touch the intimacy of deep personal production. Juxtaposing textures, presence, systems of initiation, movie images and upside-down branches holding televisions, these are nothing but the same research, and I attempt to start from the basics: lines and colour, movement to look at, as an access to the circle of my zone of personal fun.”