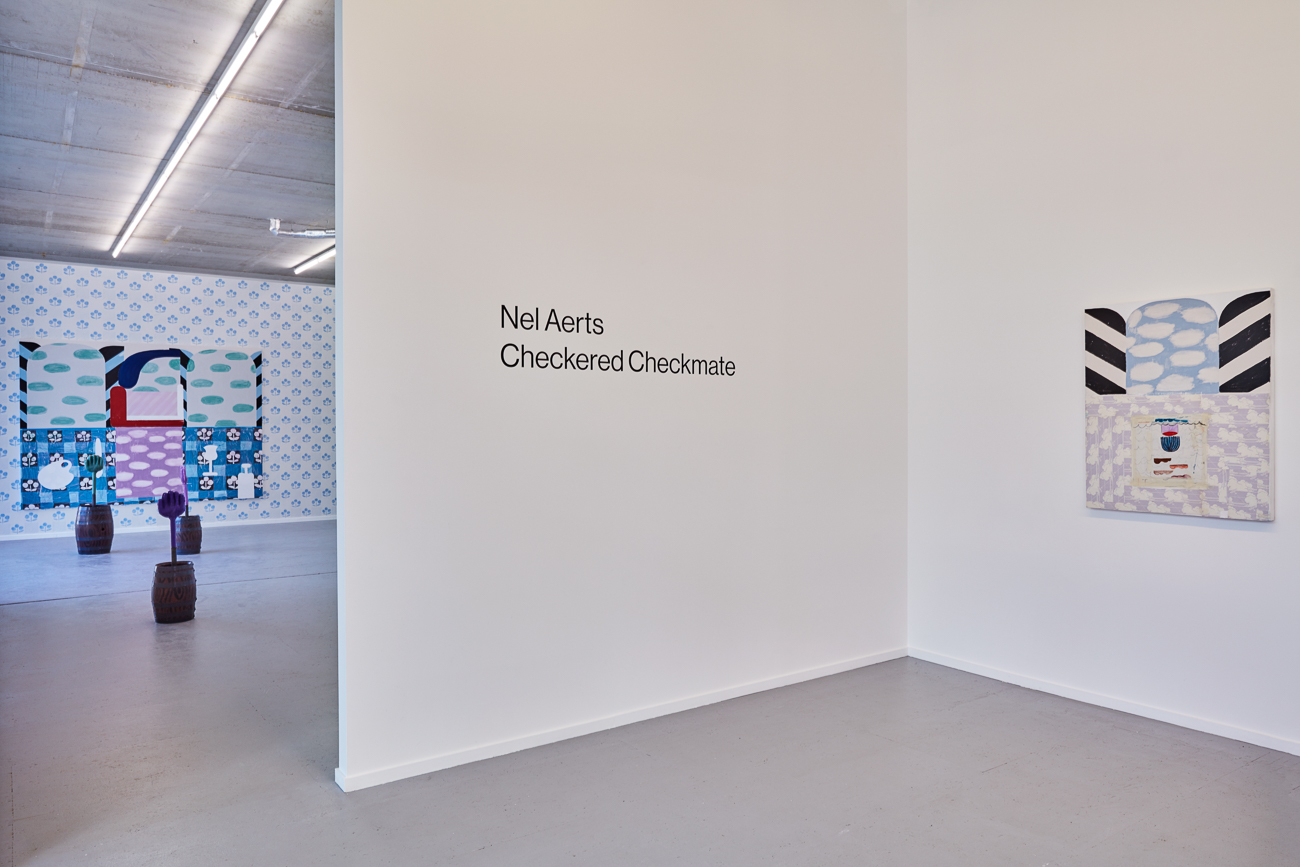 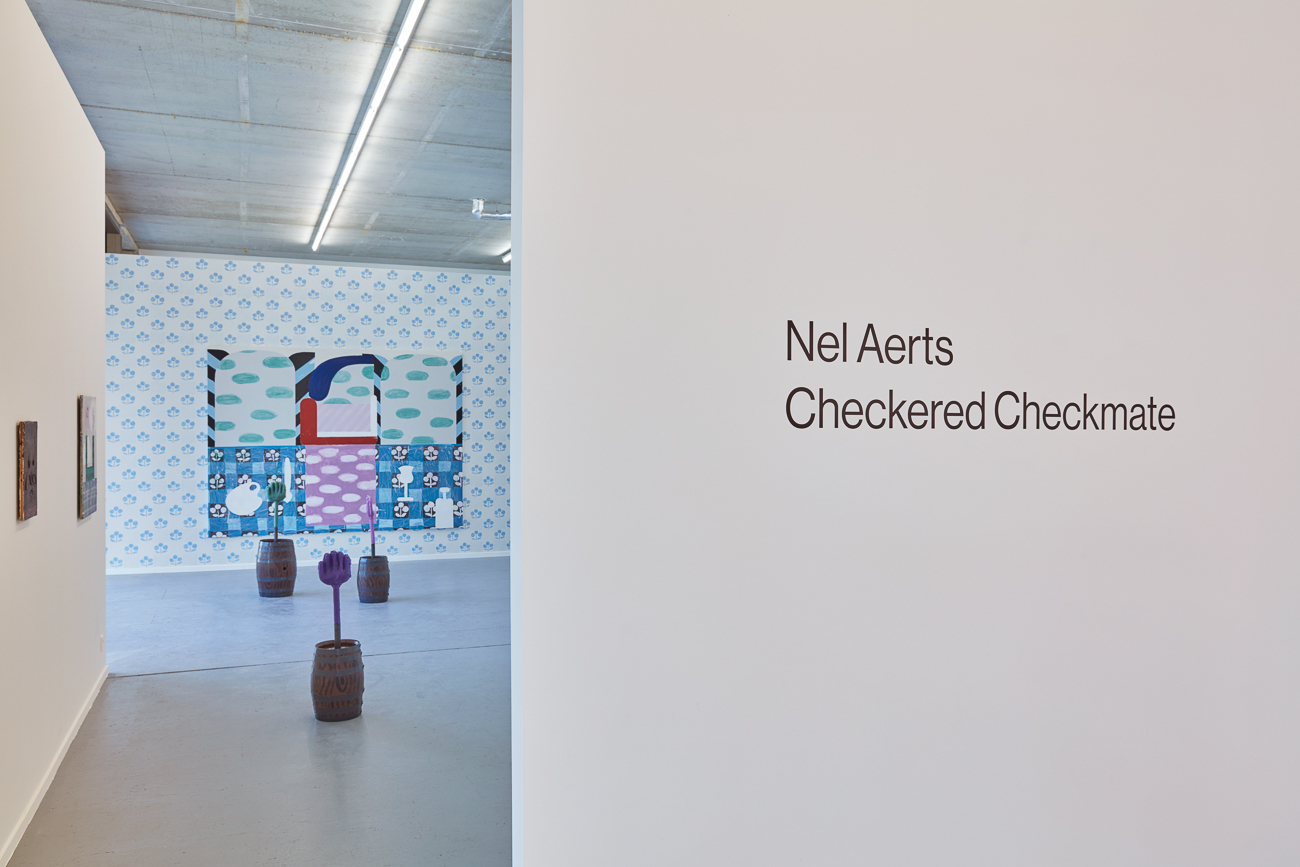 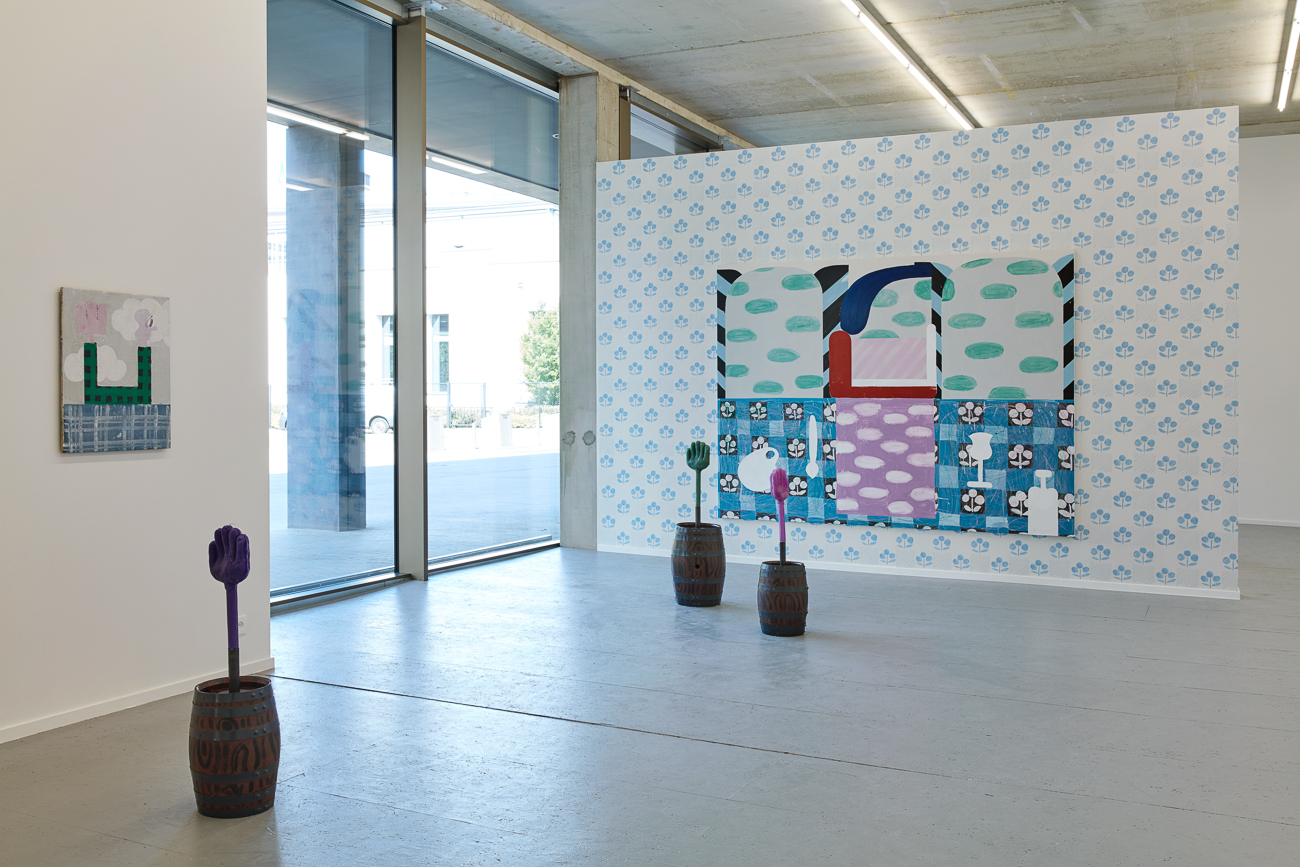 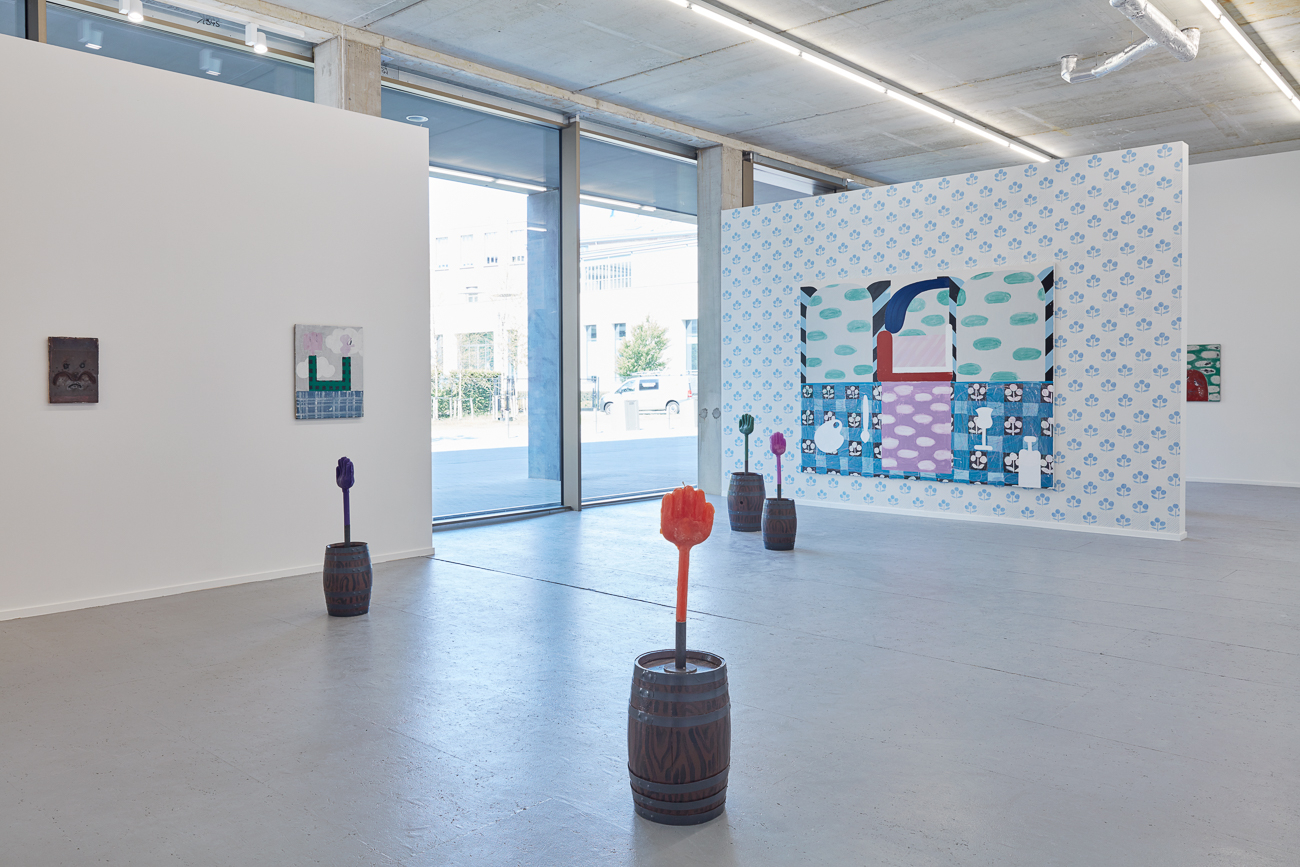 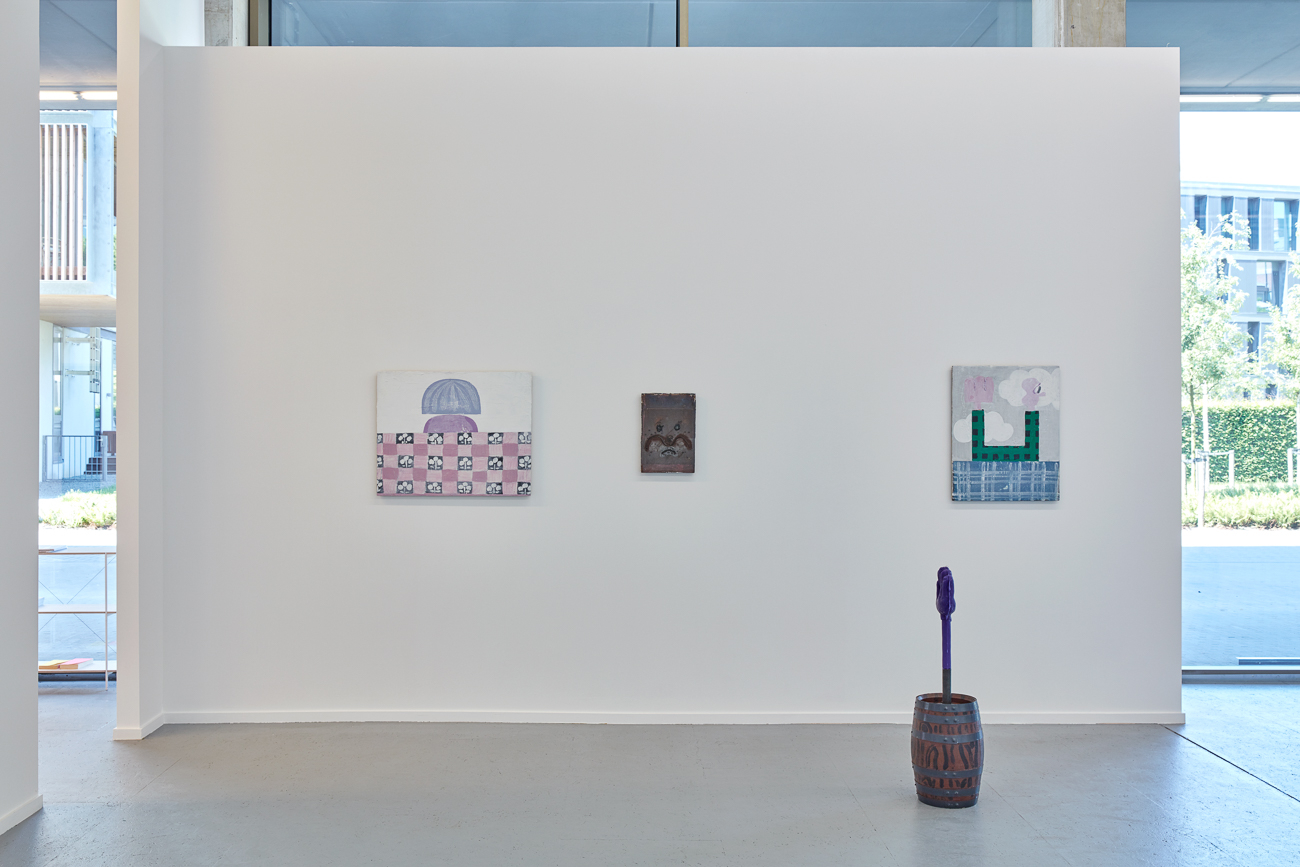 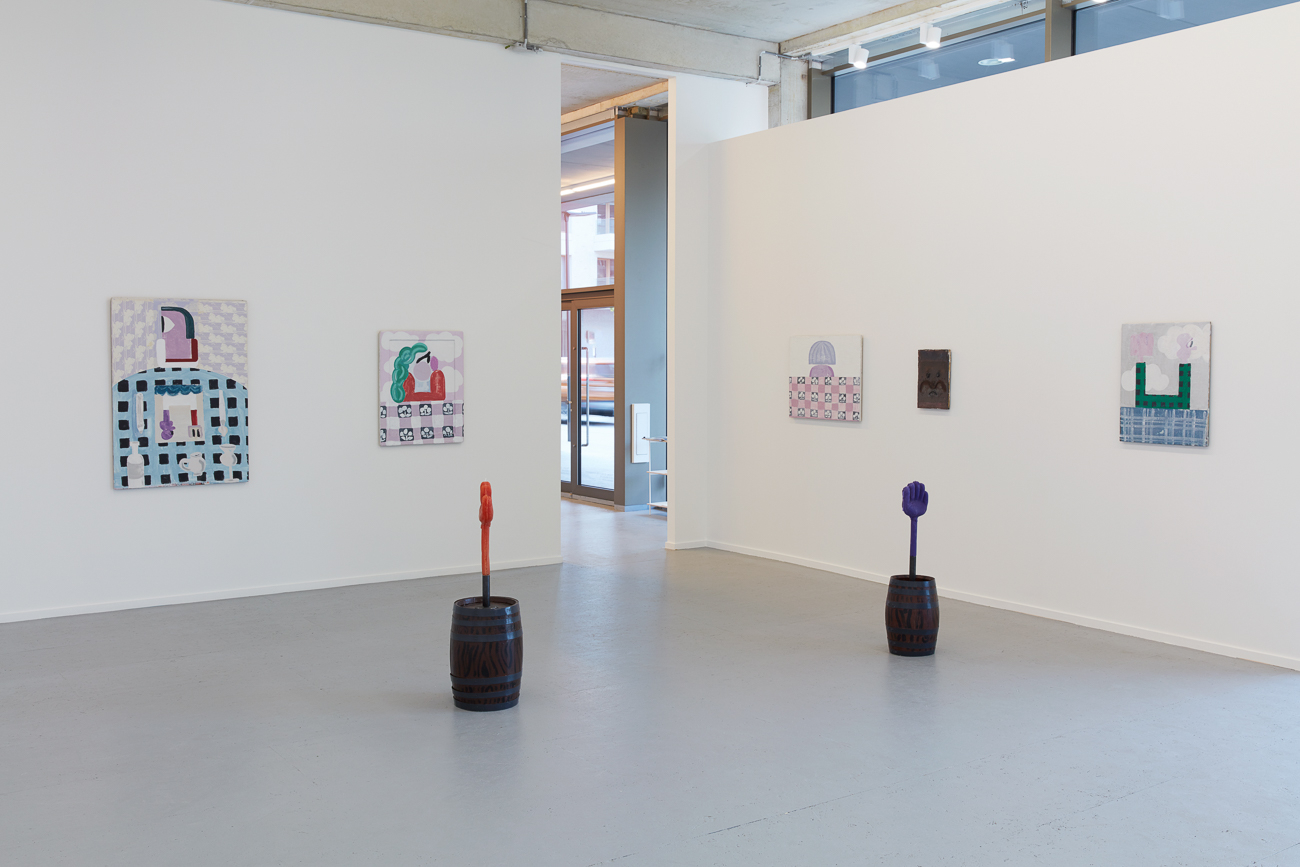 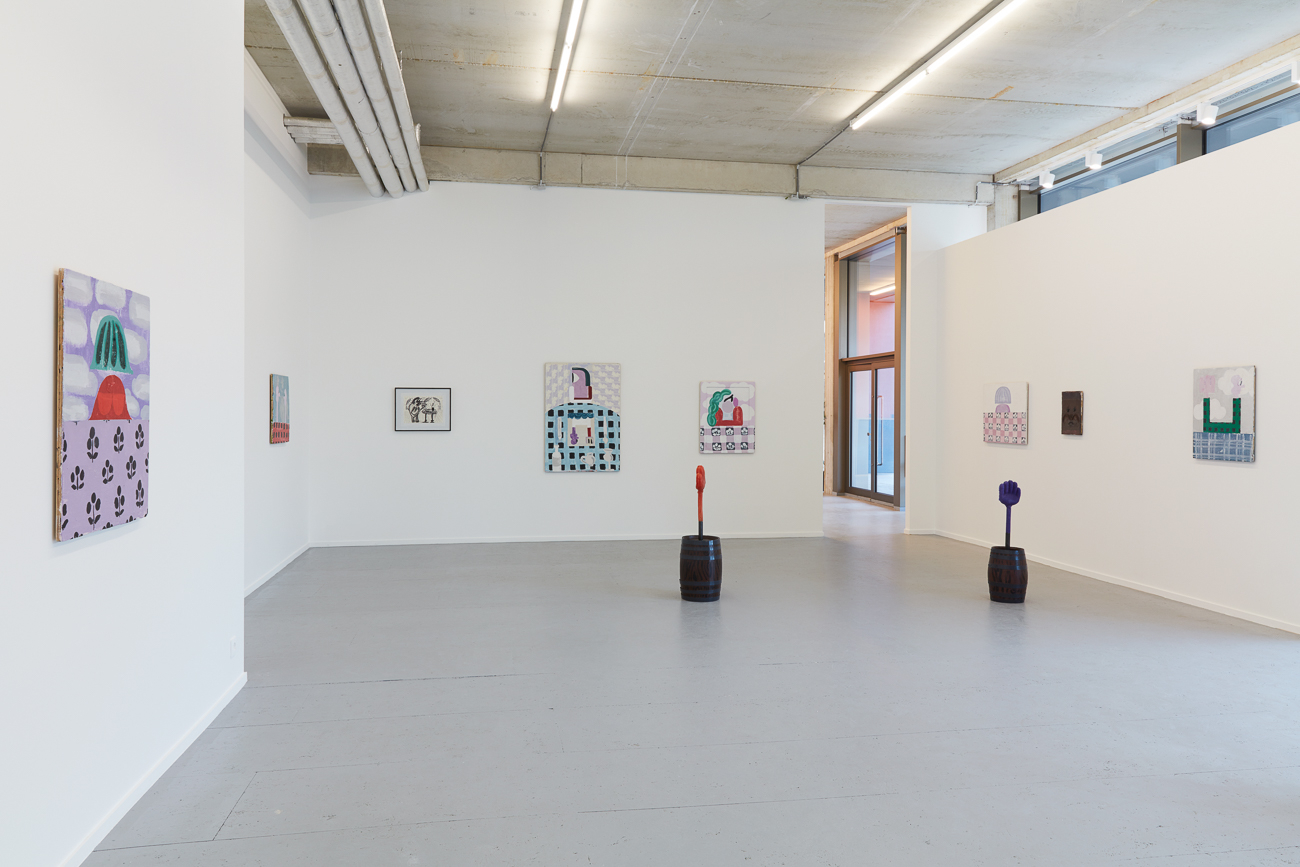 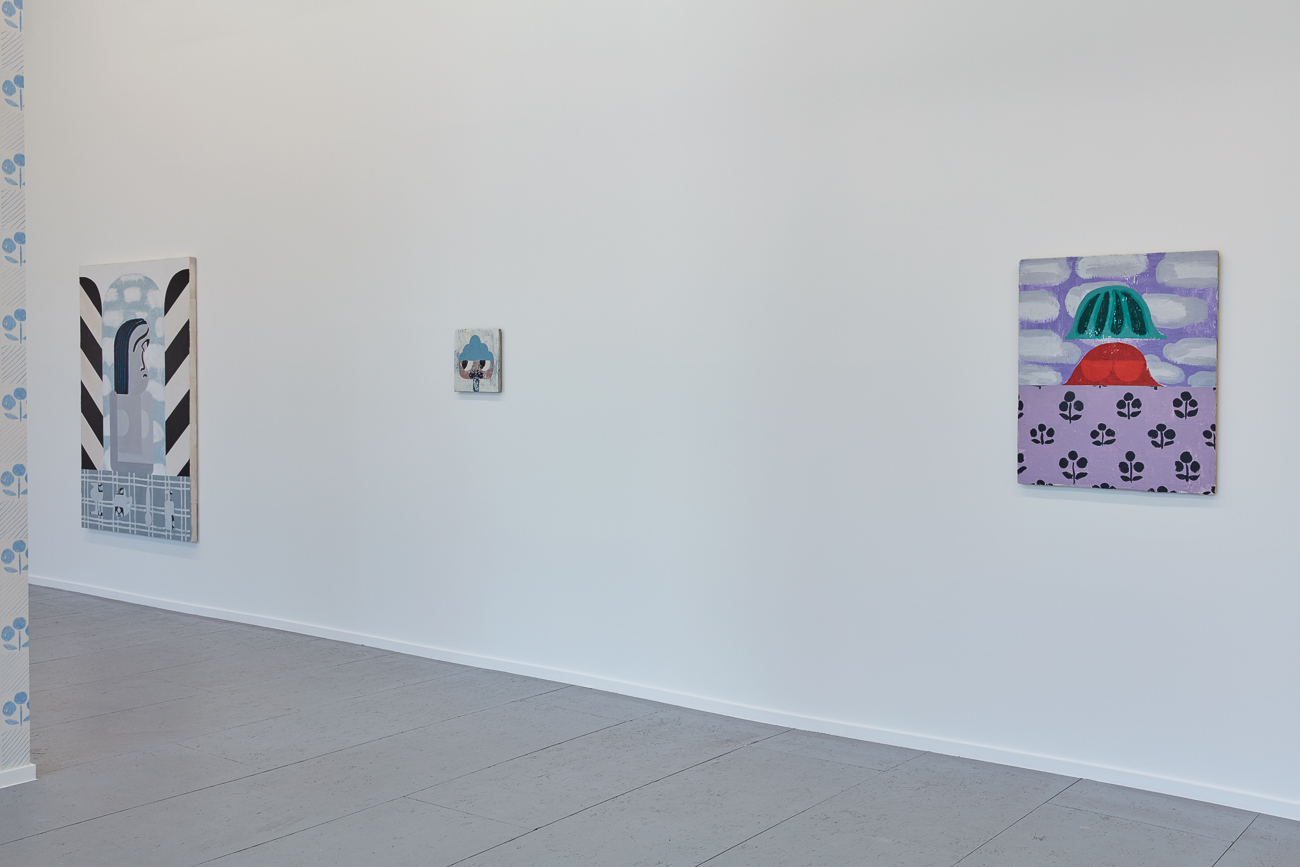 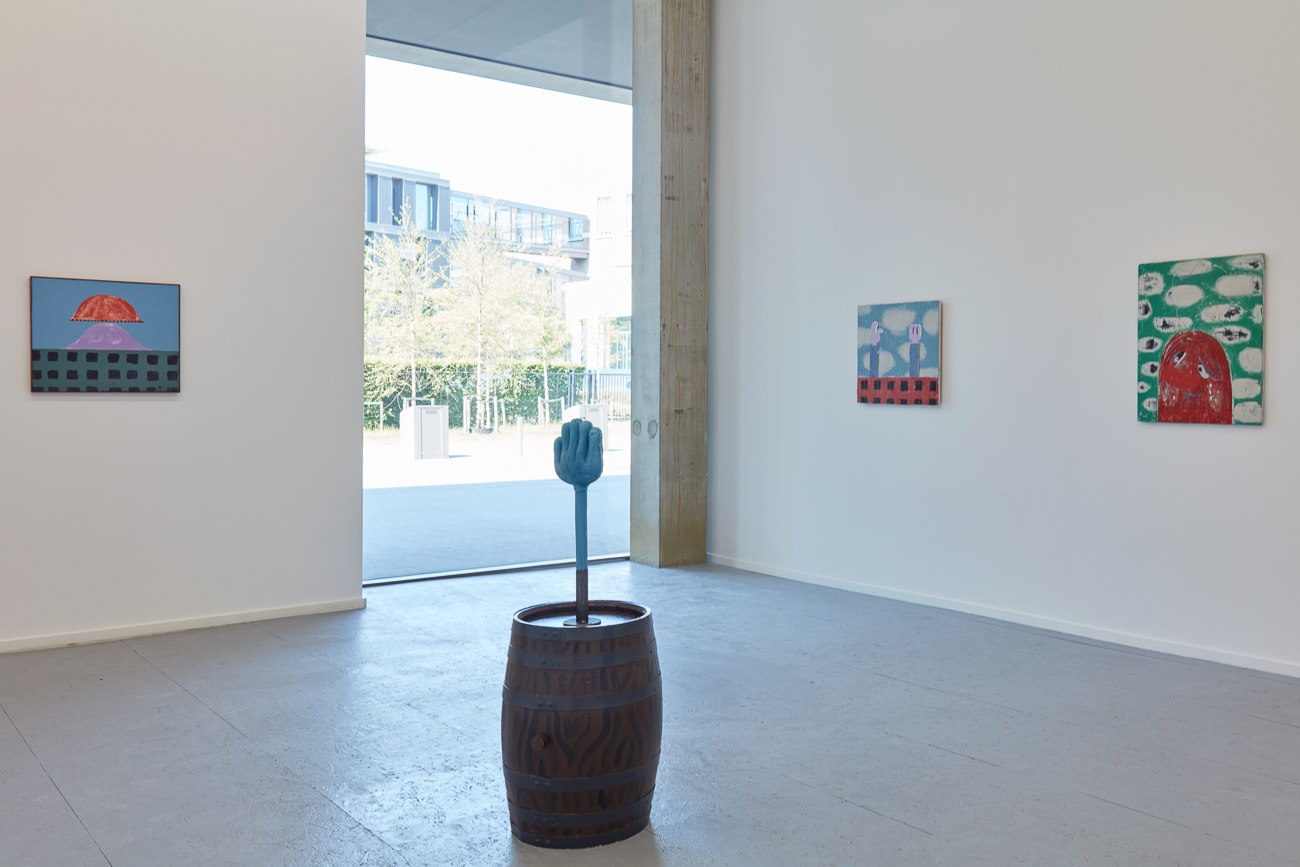 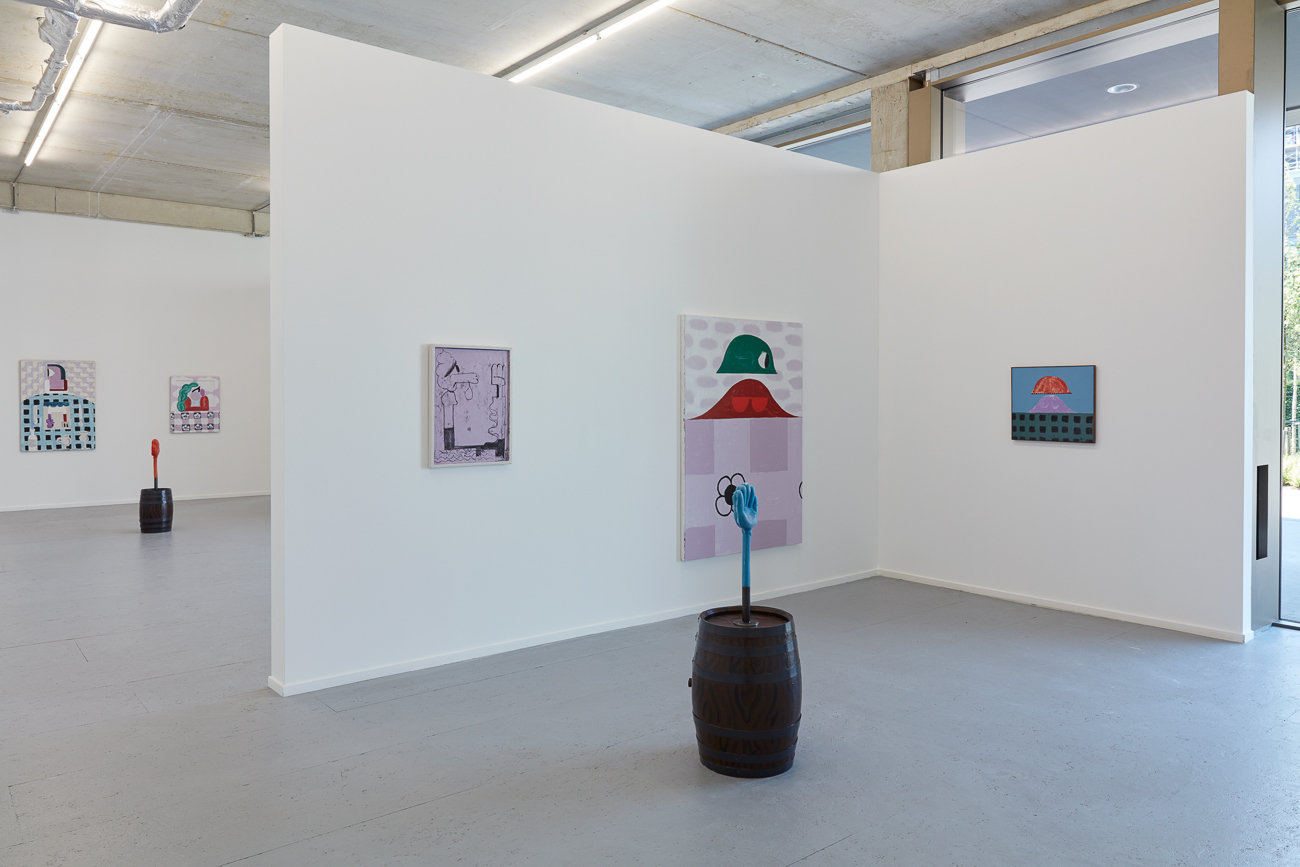 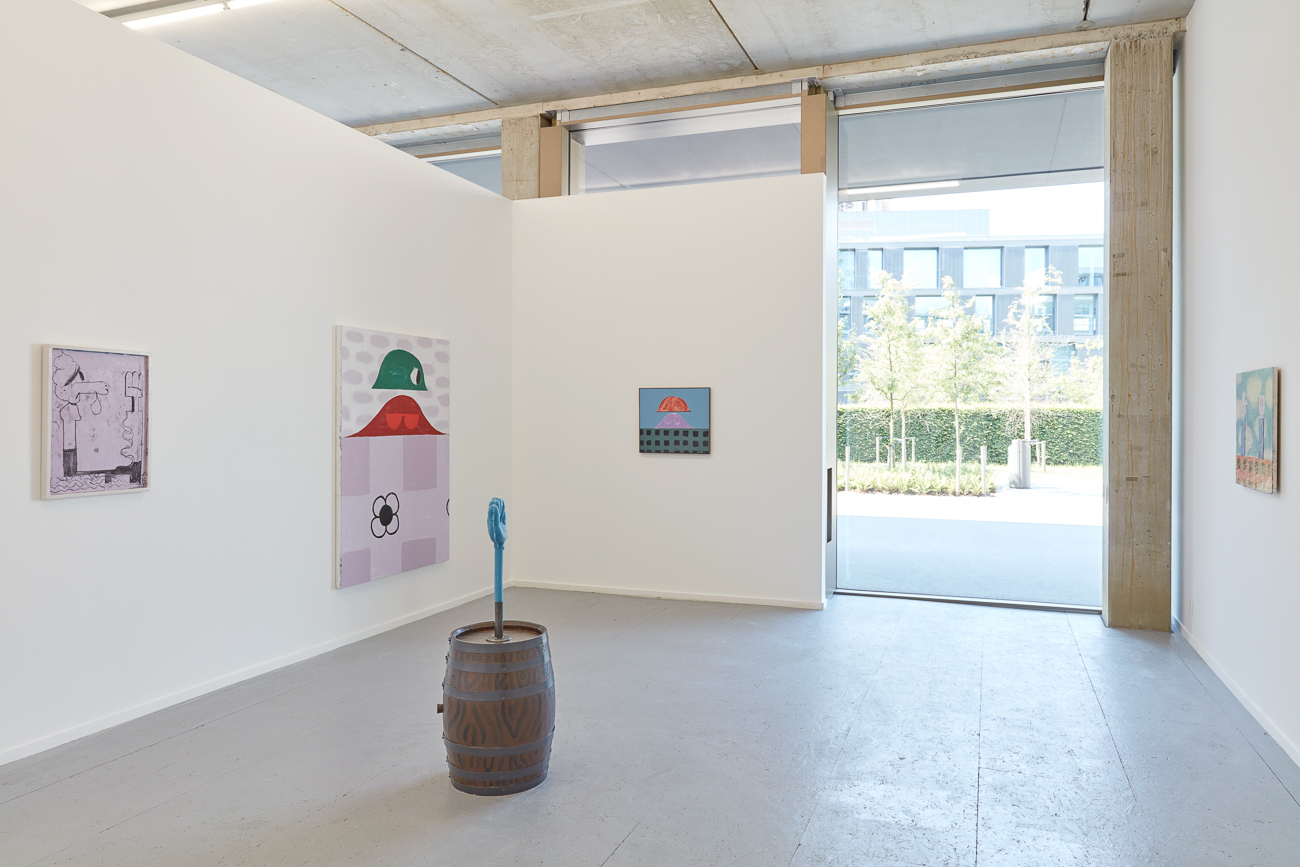 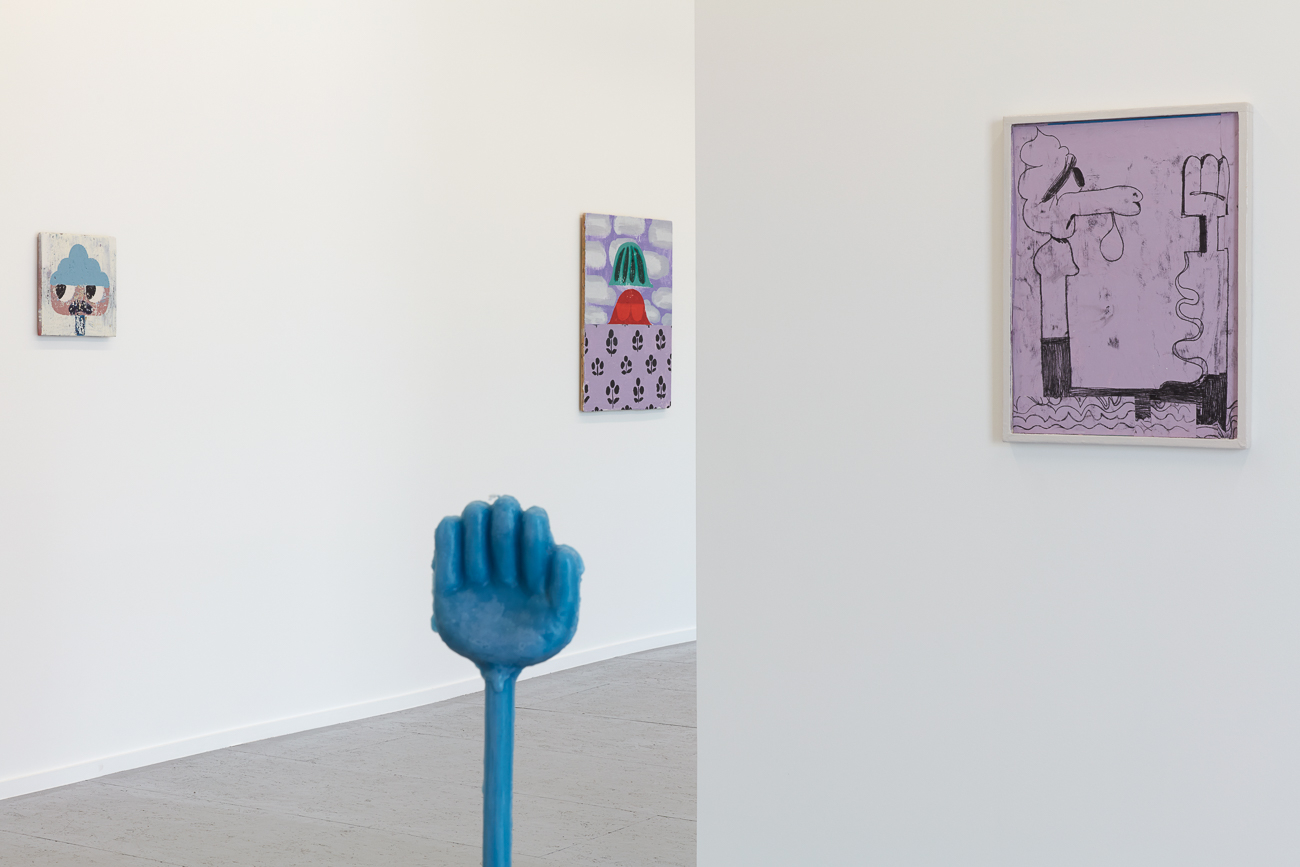 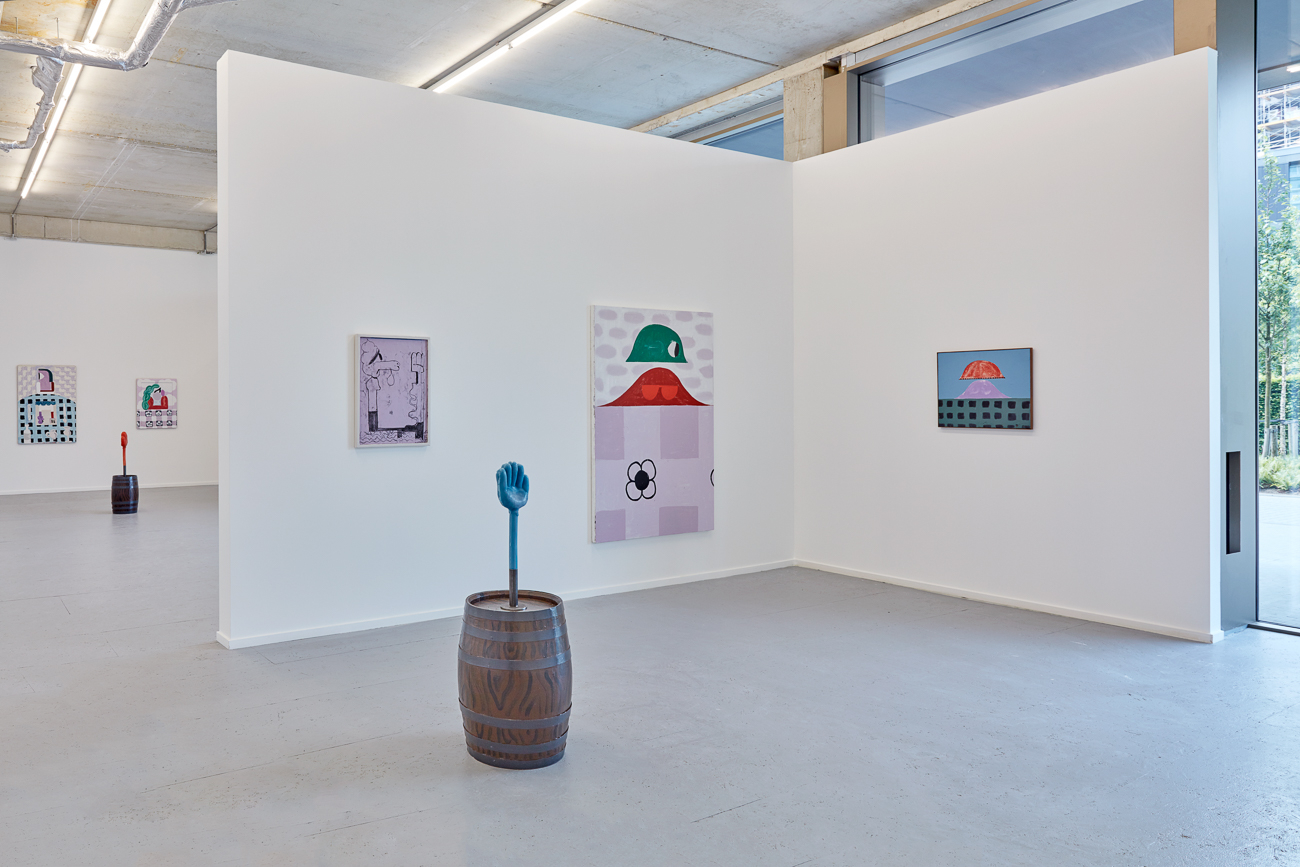 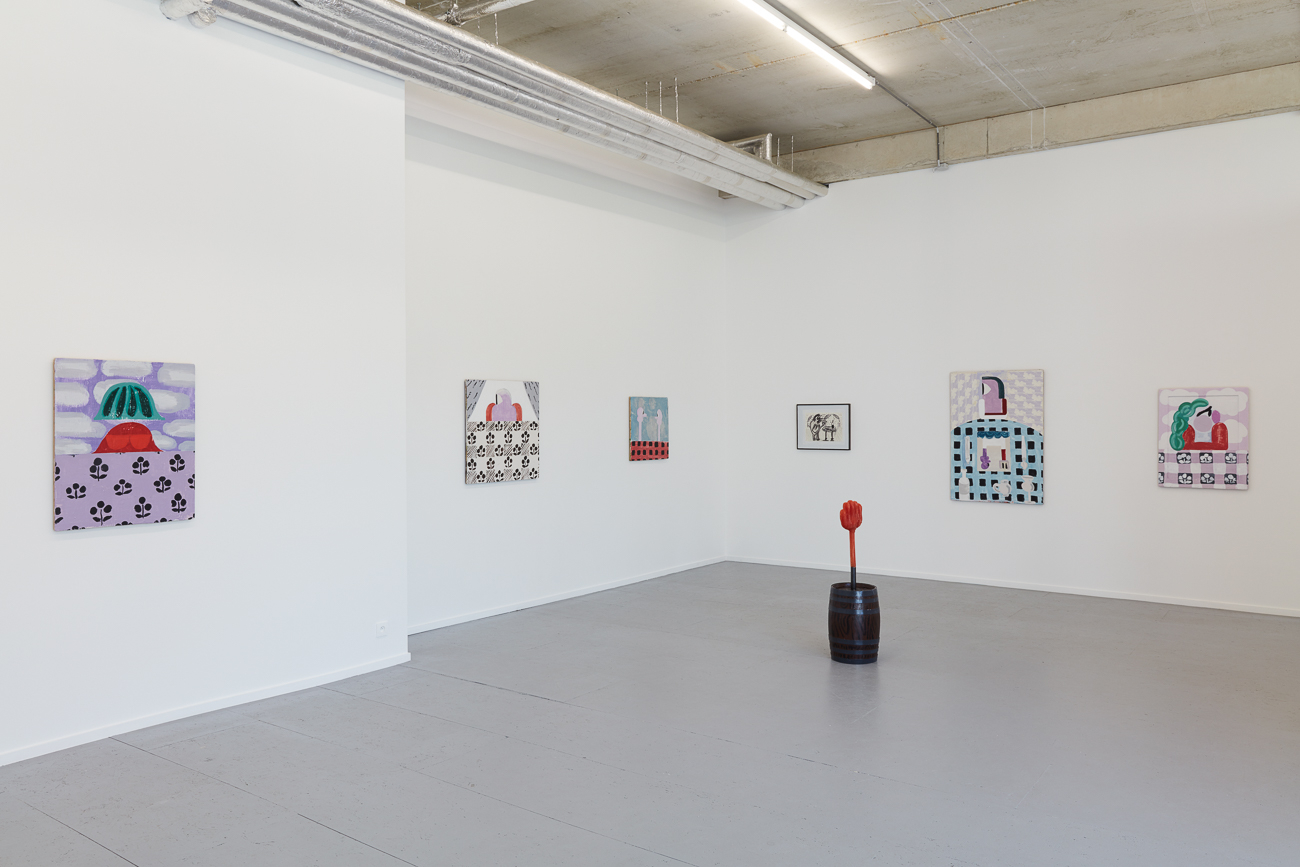 Her works are populated by harmless figures, tender colours and clouds in bright blue skies. At first glance, or to the indifferent eye, Nel Aerts’ (°1987, Turnhout) approach might appear innocent, or even naive. However, what matters is the world under and beyond those clouds. For this exhibition, Aerts has re-used old panels. Because of the underlying layers of paint, the current surface shows a great many irregularities, scars of a past life - just as a human skin might. This skin, which the artist manipulates, scratches and chafes, has become increasingly more important in her practice.

In her new series, Aerts portrays sometimes slightly daft figures. They are artists, sitting at a table, their work in front of them. The table cloths, with bright flowery or checkered patterns, summon a very homely and therefore inviting, atmosphere. Her use of typical textile patterns stems from her interest in textiles altogether. They are simply different surfaces, just as her panels and canvasses are.

The table and the work are reflected upside down in the lower half of the paintings. The paintings are both art works and mirrors. Constantly taking a step back to inspect her own oeuvre, Aerts lets figures, patterns and shapes recur. As a result of a previous presentation at De Warande in Turnhout, which included works from several episodes in her oeuvre, she decided to look all the way back to the start of her practice - by re-using panels and reinterpreting subjects and situations.

‘De beste stuurlui staan aan wal’ is a perfect visual synthesis - one might even say: a visual mise-en-abîme. A window to a bright clouded sky is formed by two black and white striped shutters - a visual reminder of a short time spent in Nijmegen. On the table, created by lilac flowered wallpaper, recuperated from the exhibition at De Warande, lies, in this case, a sketch for a huge wall painting she made in Antwerp. This direct collage in painting is new in Aerts’ oeuvre.

The title ‘Checkered Checkmate’ bears a loose association to these typical repetitive textile patterns. But above all, it can be read as an alter ego and a nickname for the main characters in this series – ‘lonely figures’ as the artist calls them. Some of them recognizable as human, others more abstract, they are all individuals, ‘keeping an eye on each other’ in the exhibition space.

The figures are kind and accessible – sitting with a calm posture and inviting the viewer for a nice chat. For the artist, they are a reflection of herself: when they are finished, there is a sense of recognition. For the viewer, they do not impose themselves. They are modest presences, merely offering the possibility of conversation. The exhibition combines paintings on panel and canvas, with wax sculptures in the shape of hands, direct follow ups of Aerts’ hand sculptures shown in WIELS in 2012. The hands, placed upright on wooden barrels, are greeting the visitors from several points in the exhibition. Just as Aerts’ characters, they are silent, discrete, yet inviting.

By taking a look over her shoulder, to her evolution as an artist so far, and by re-using her own motifs, Nel Aerts is clearly reaffirming her characteristic imagery and artistic personality in this exhibition. ‘Checkered Checkmate’ shows a range of deeply personal emotions in sincere figures, that are representative of Aerts’ view on life as an artist: sitting at a table, working, and modestly hoping the viewer will take some time to relate. Her own position as an artist and her oeuvre are ‘on the table’, in the most honest of ways.