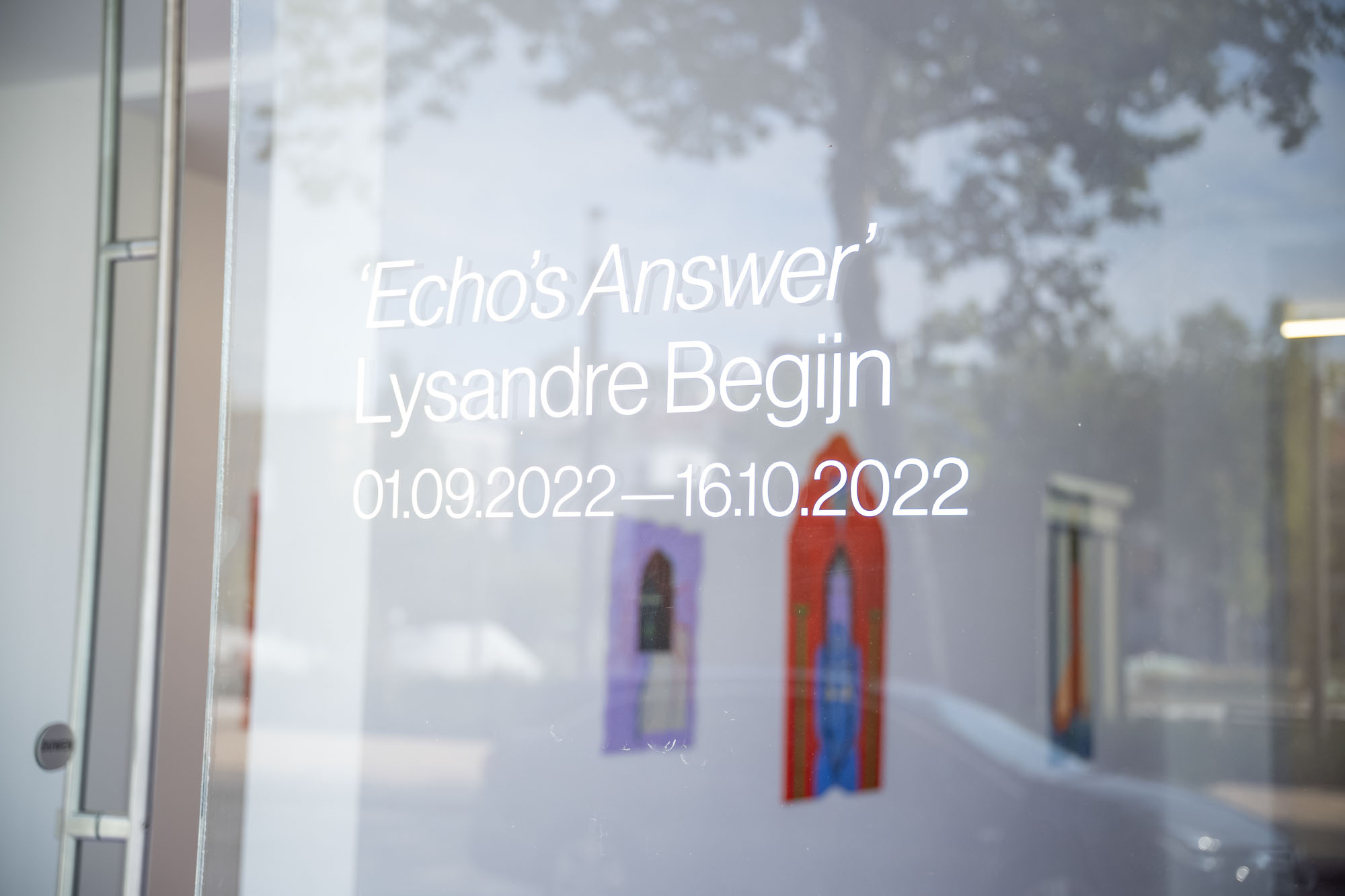 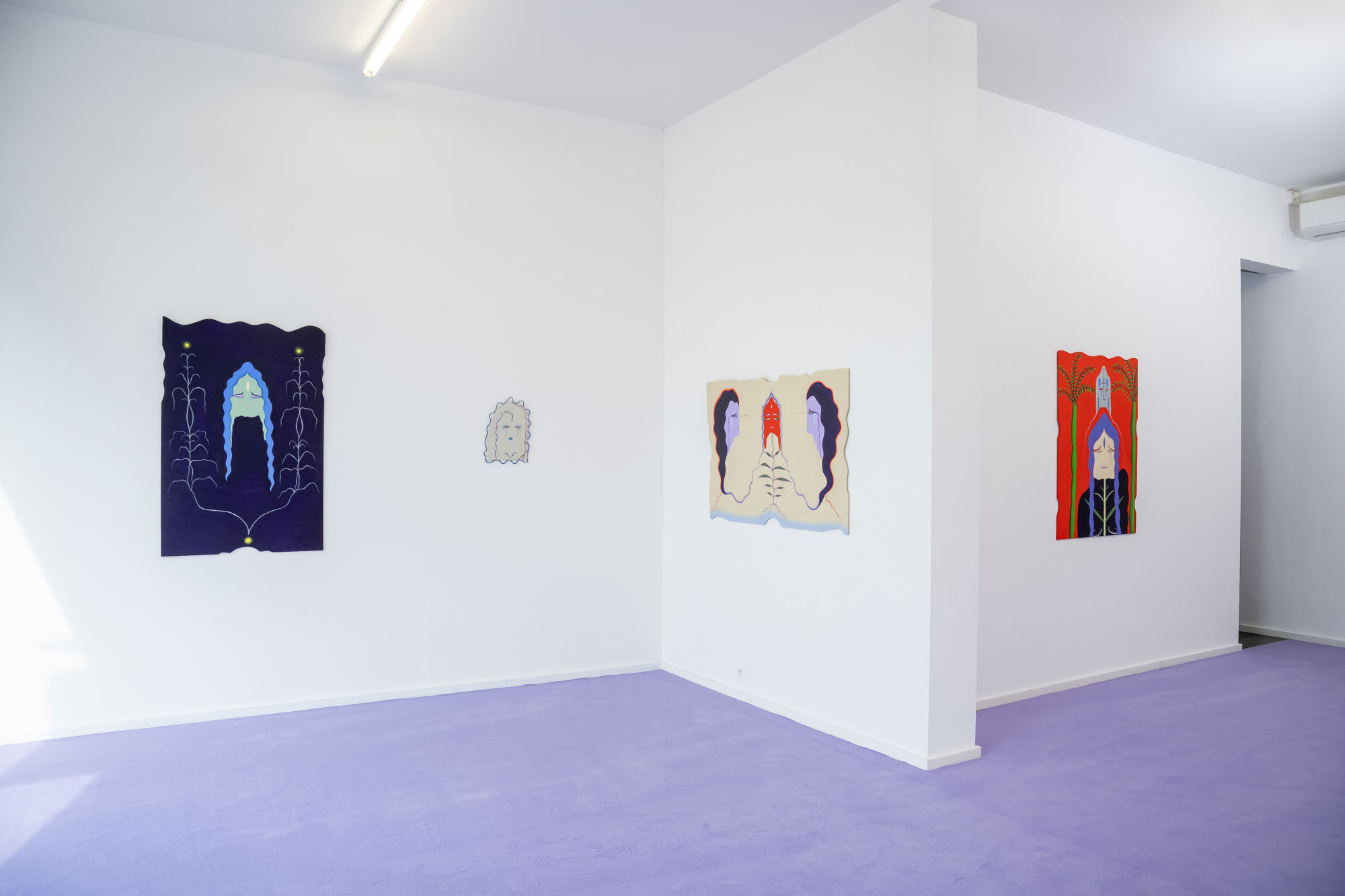 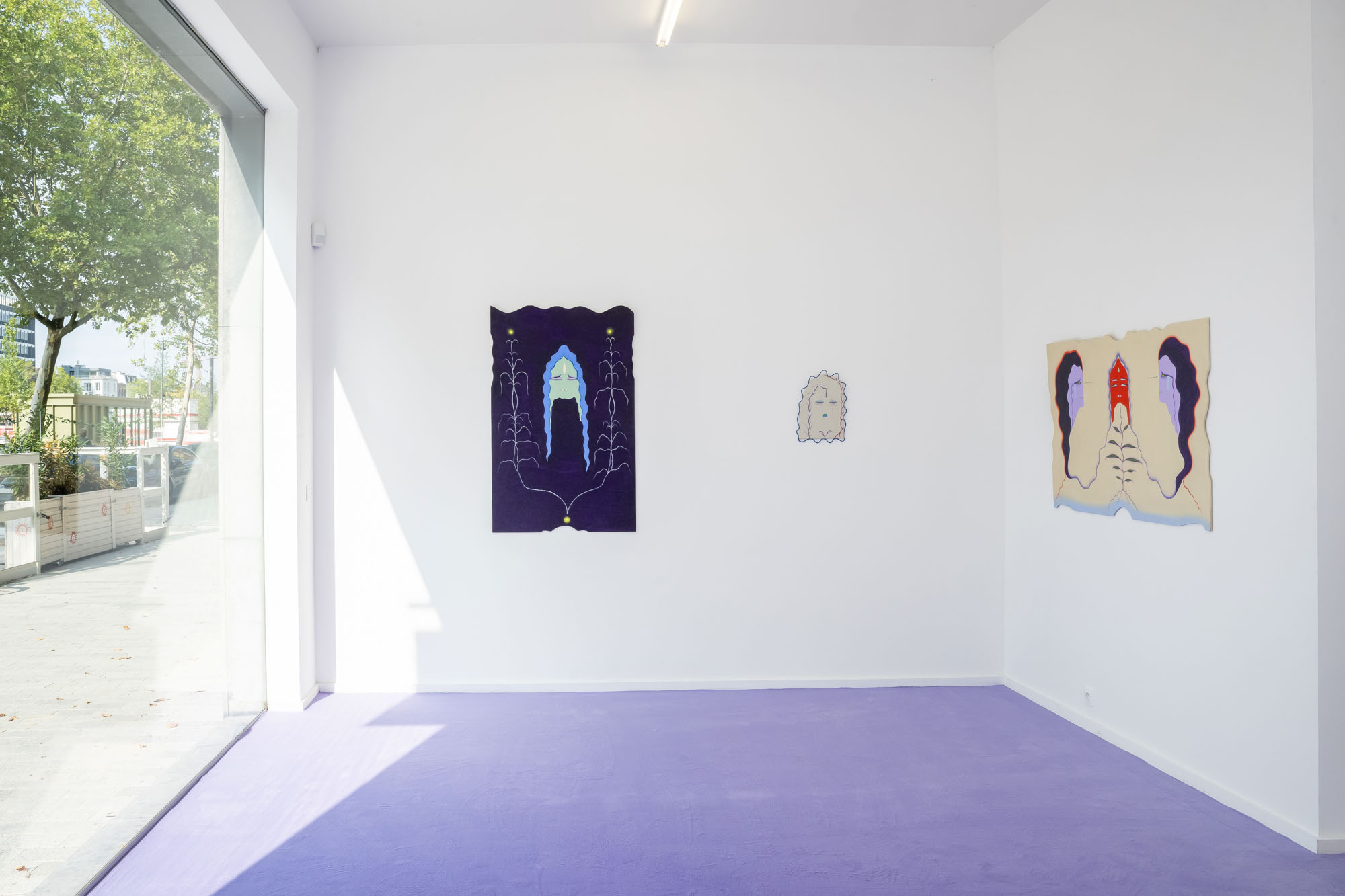 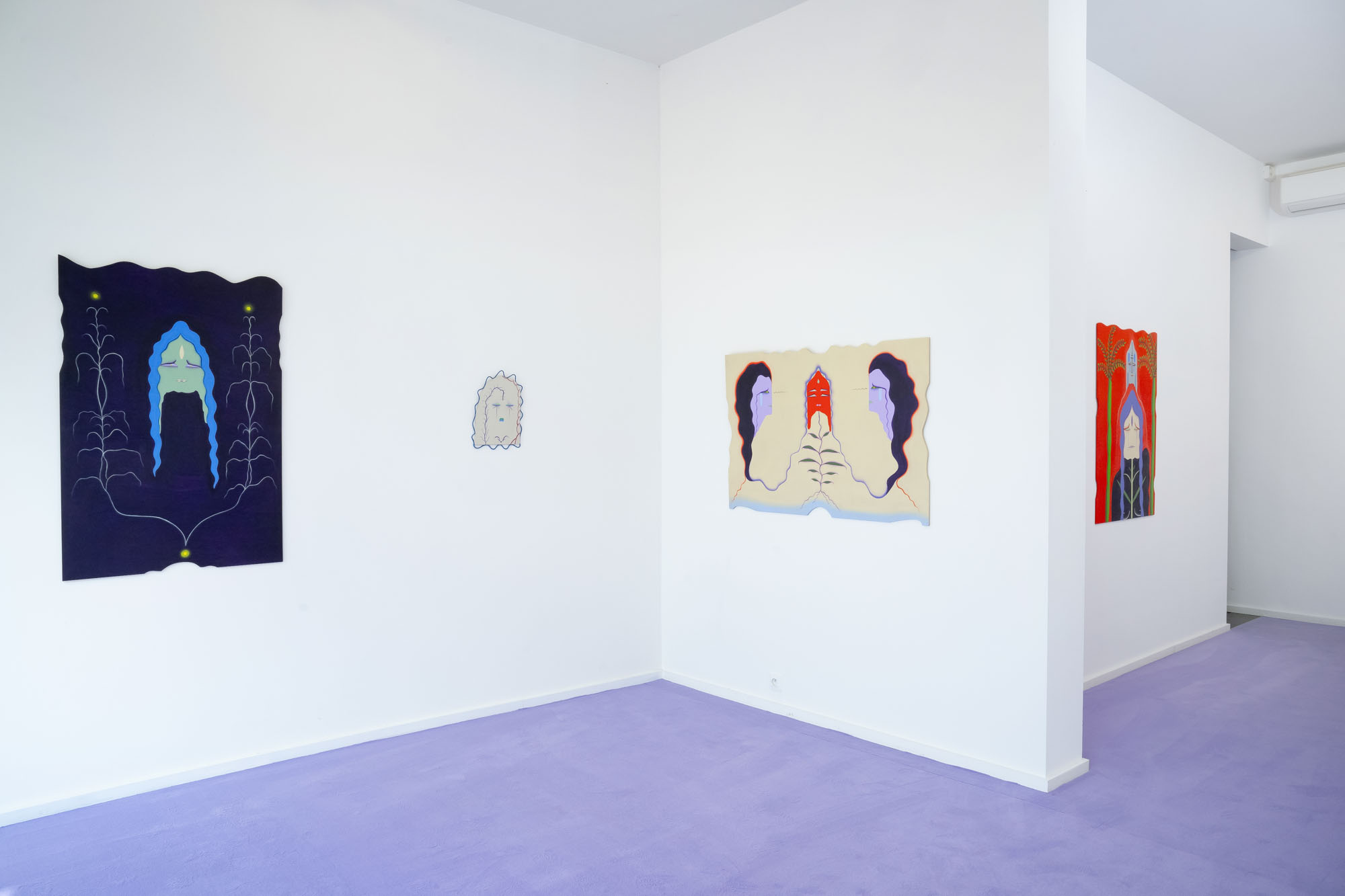 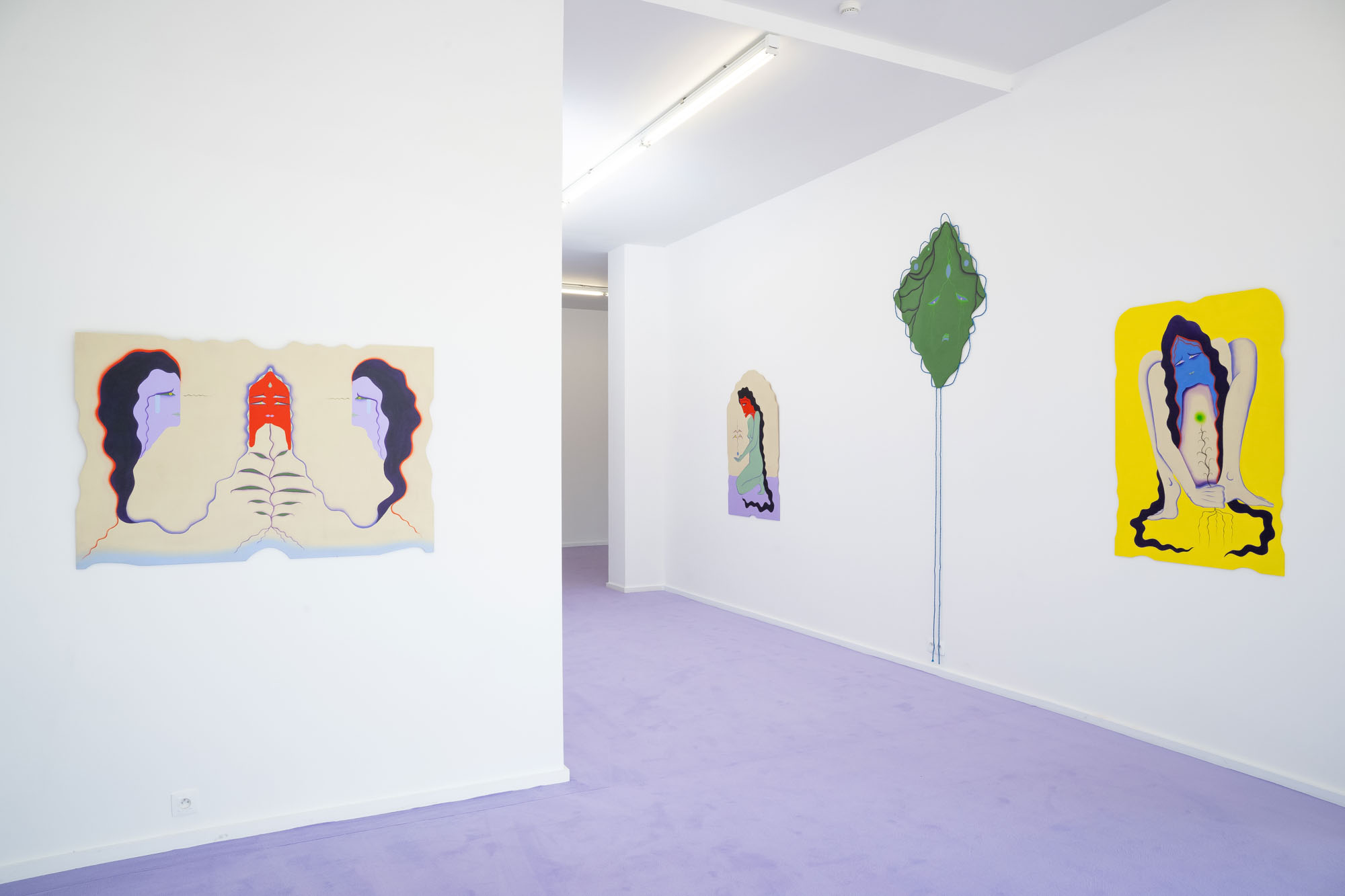 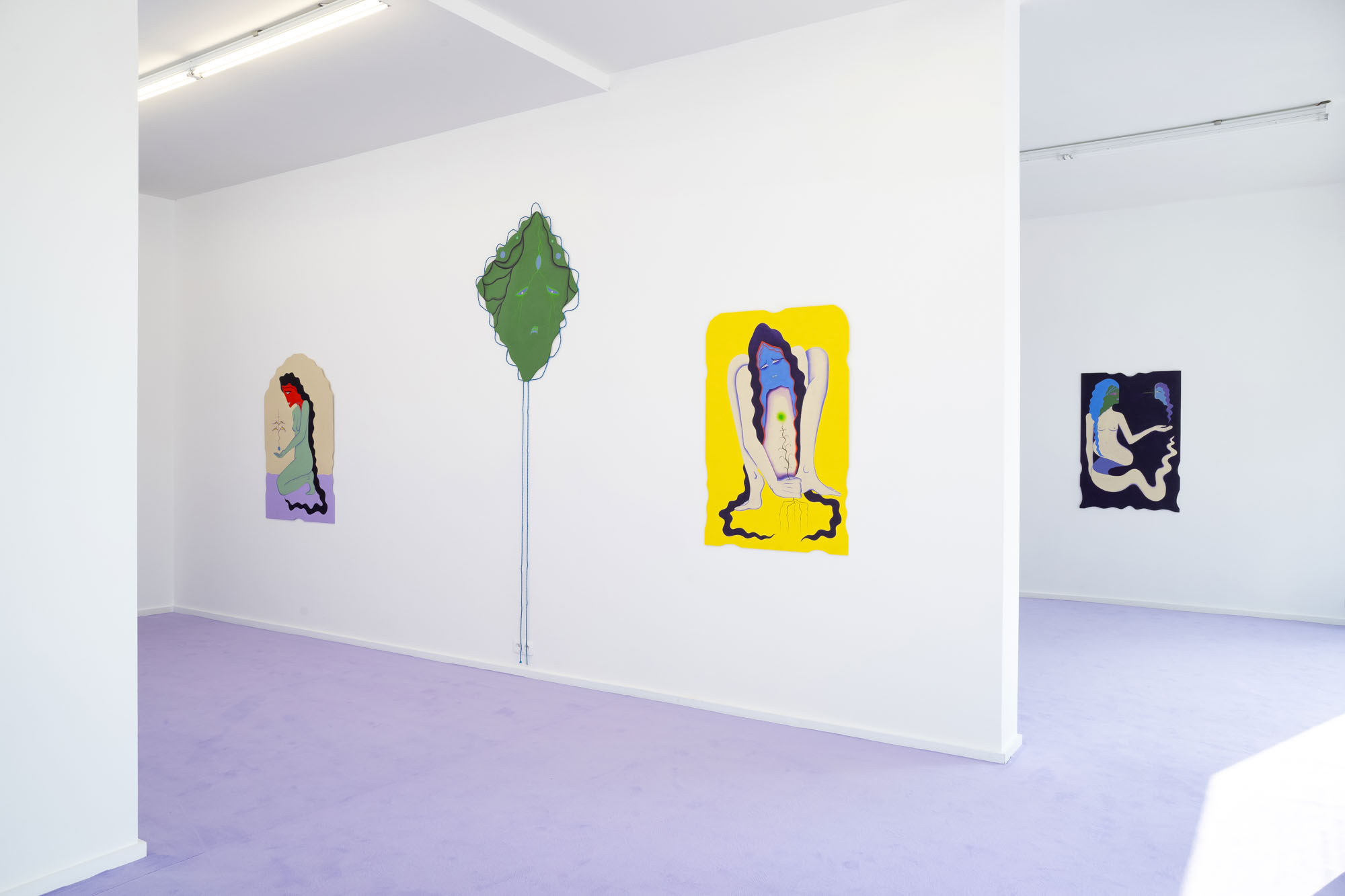 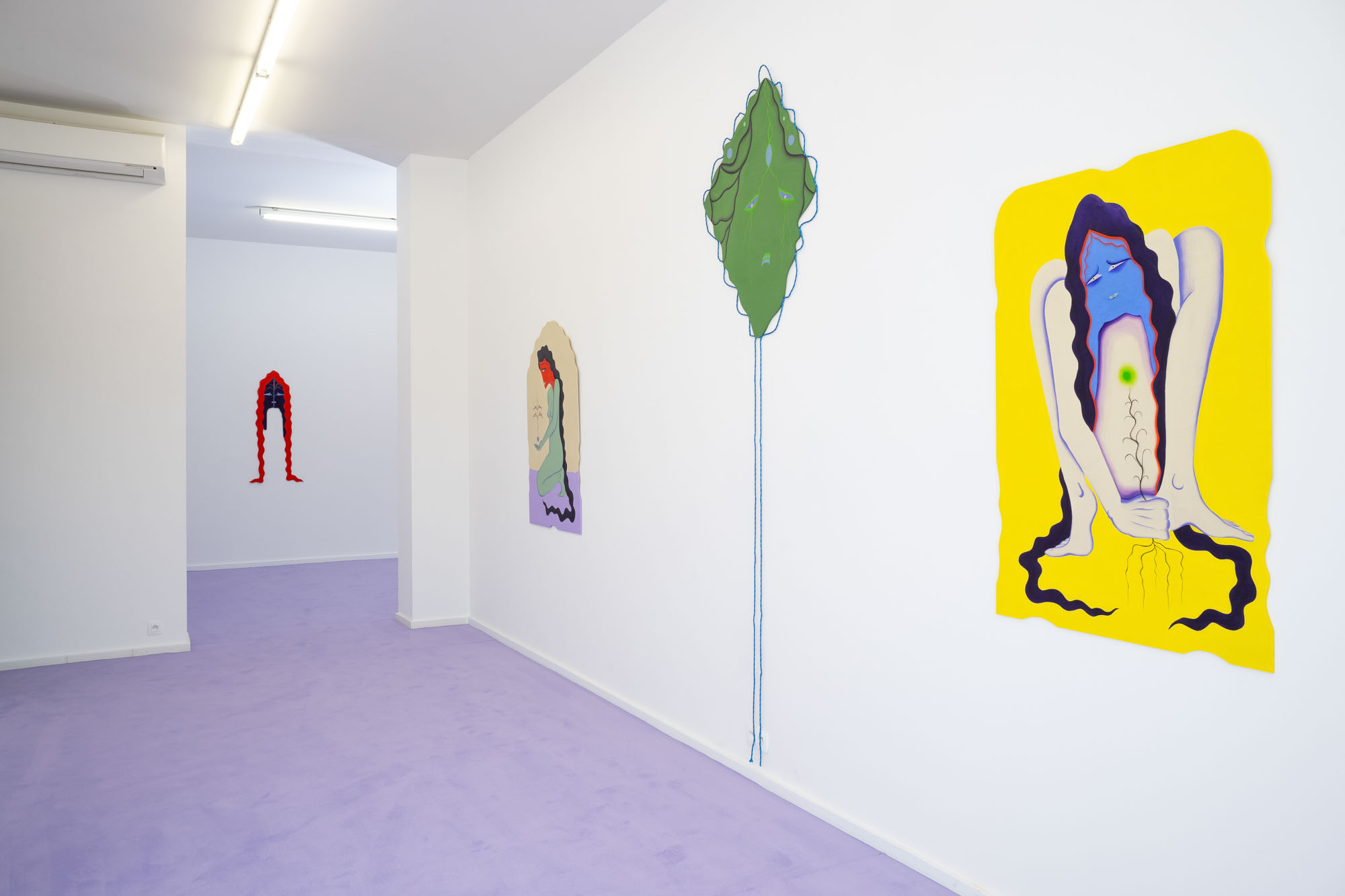 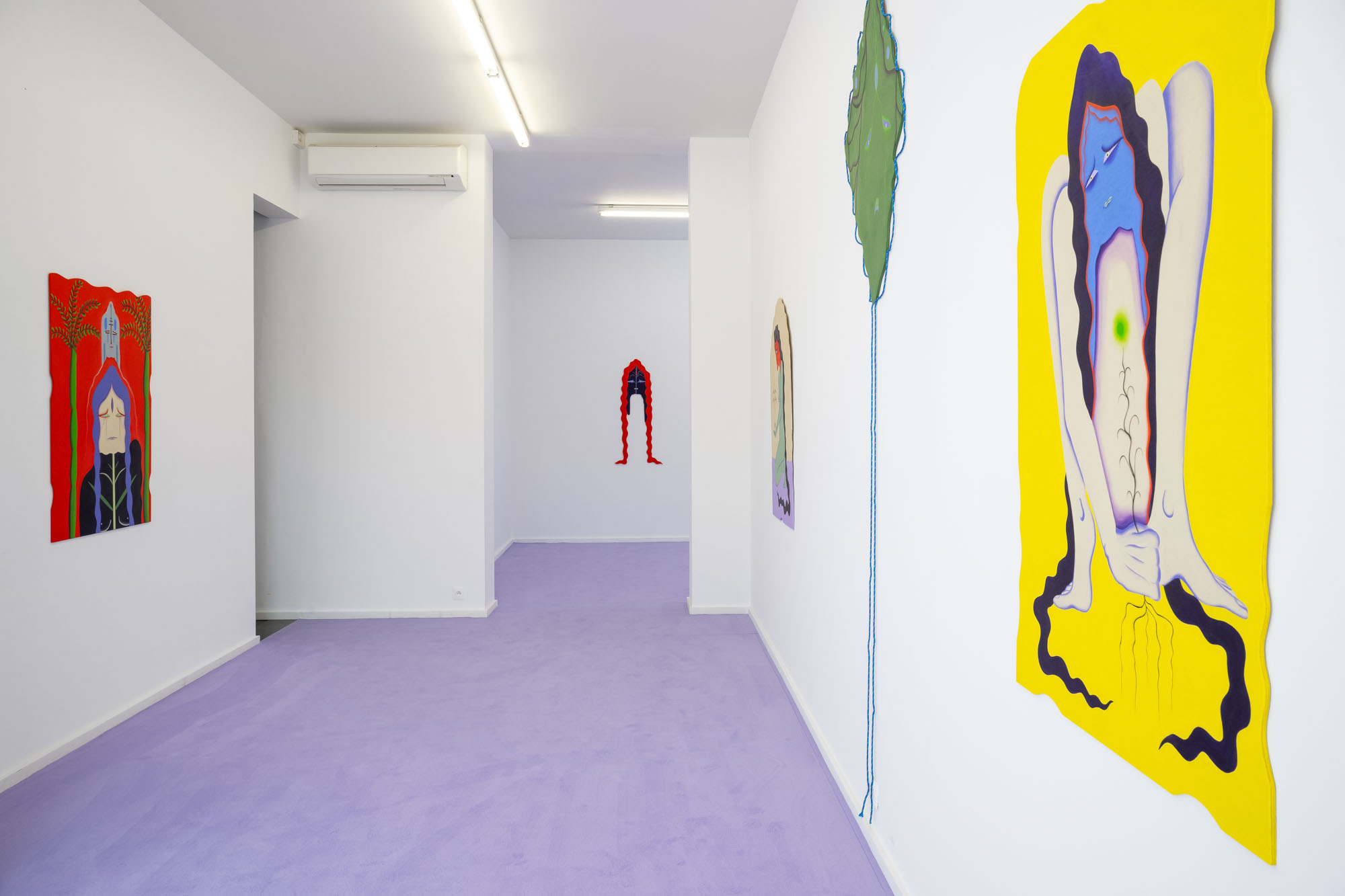 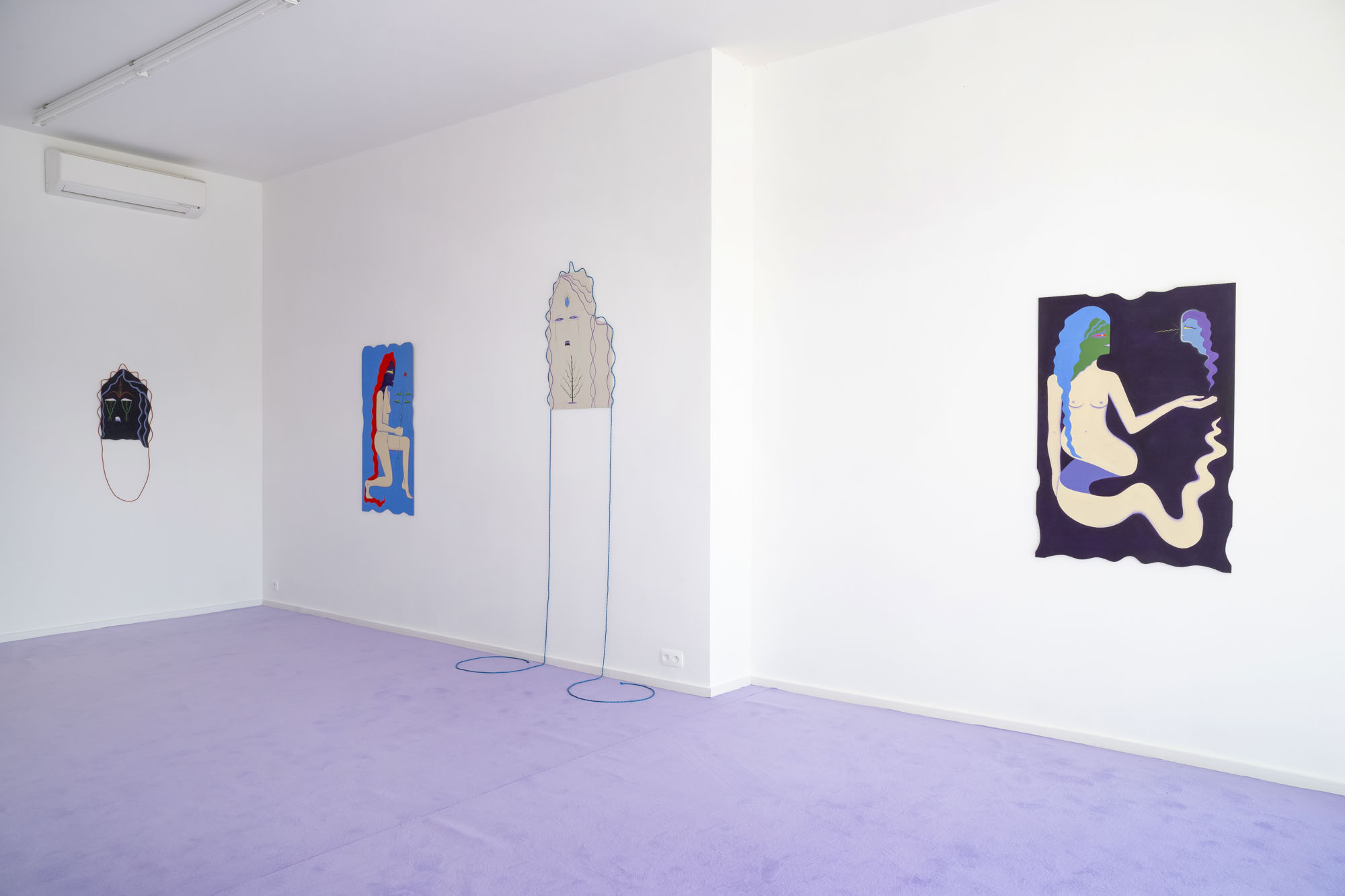 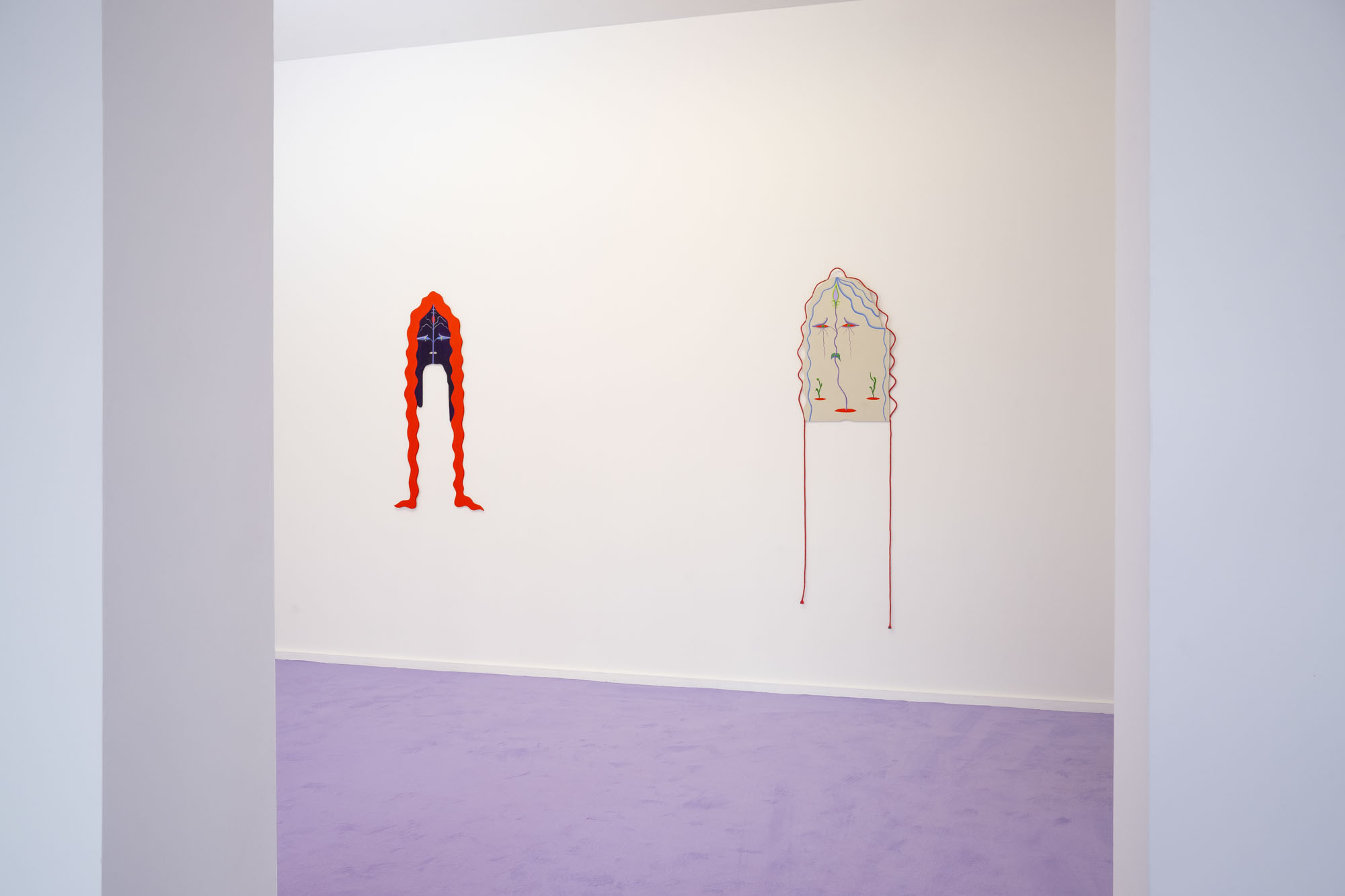 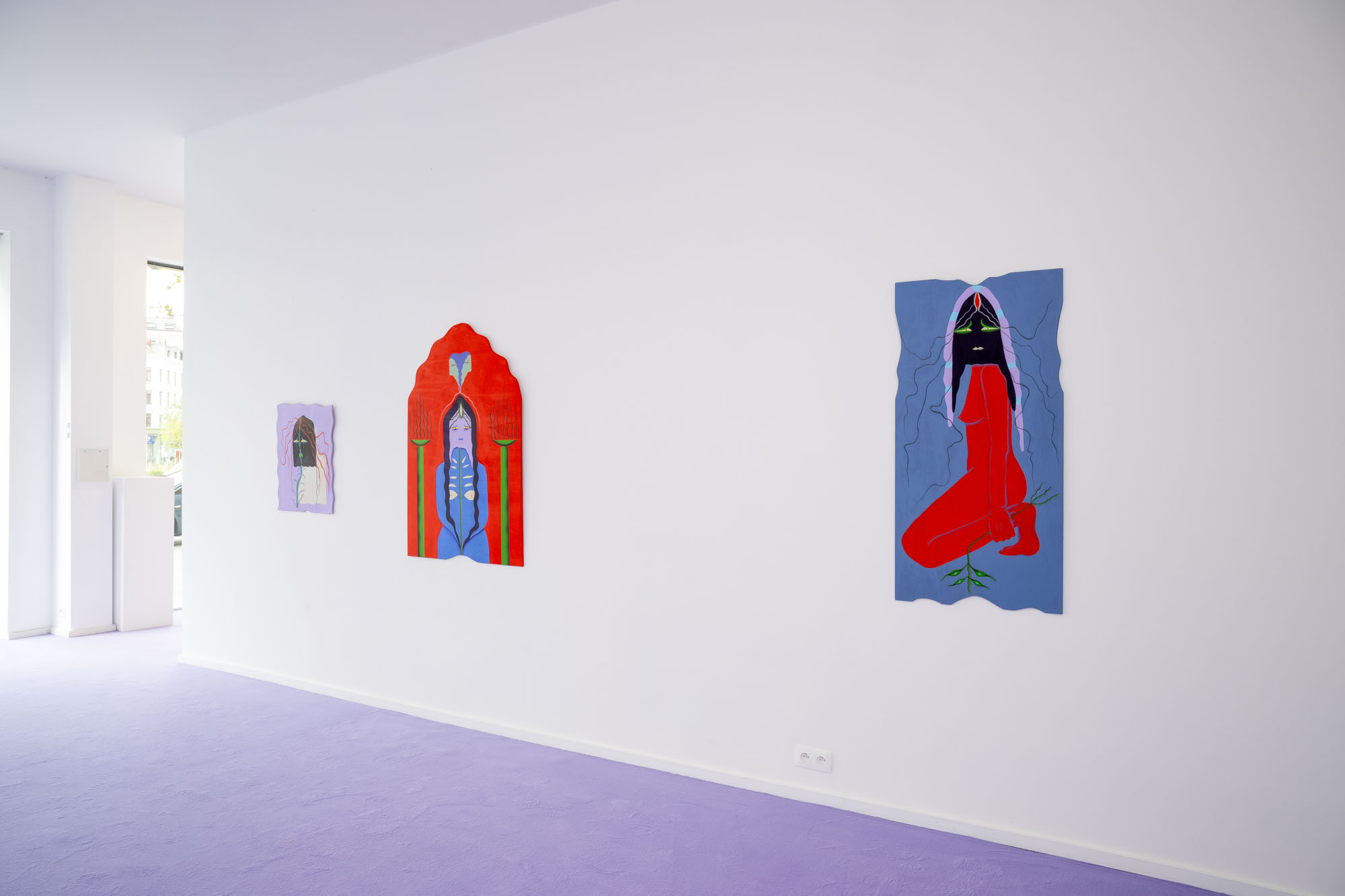 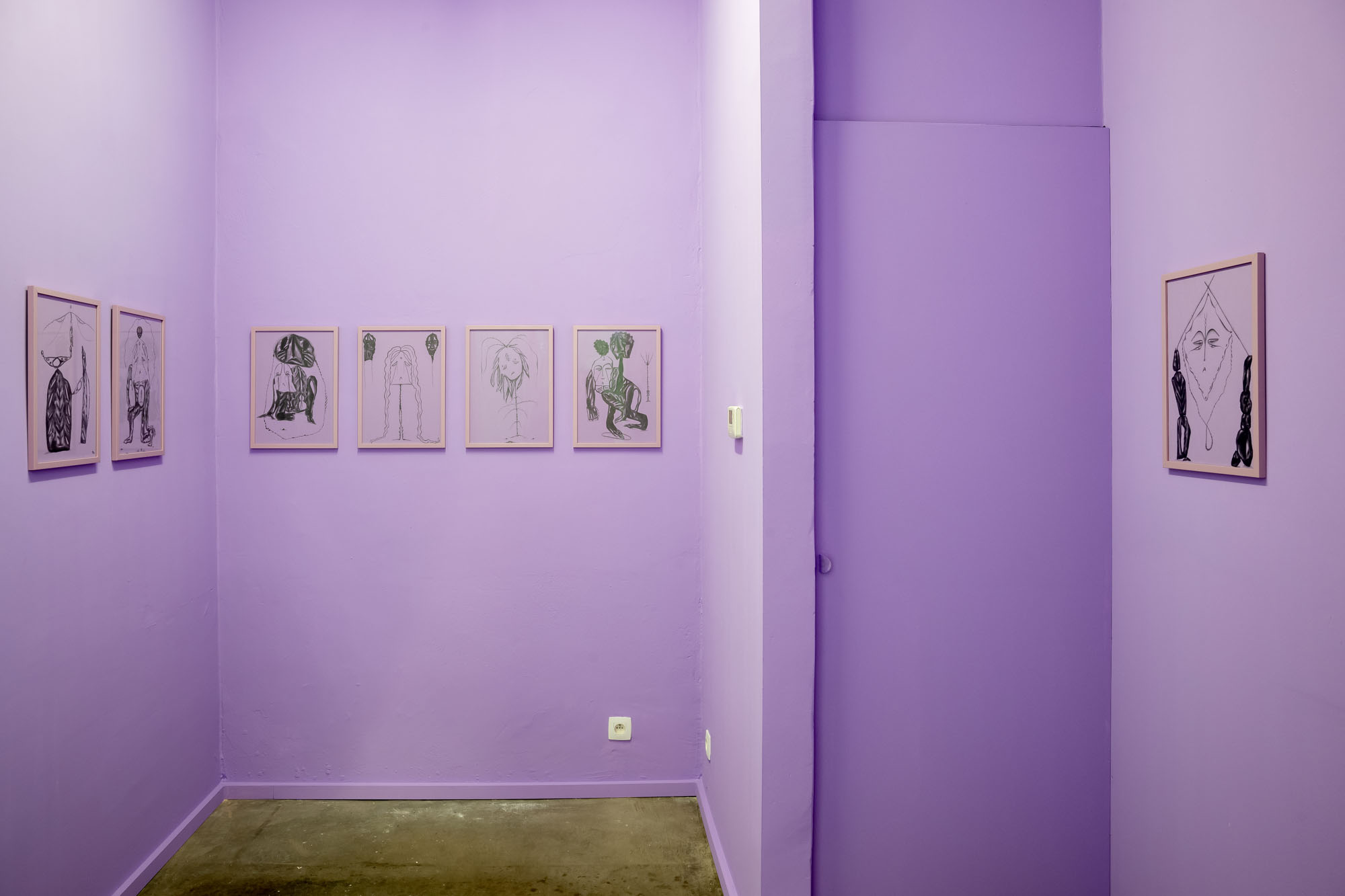 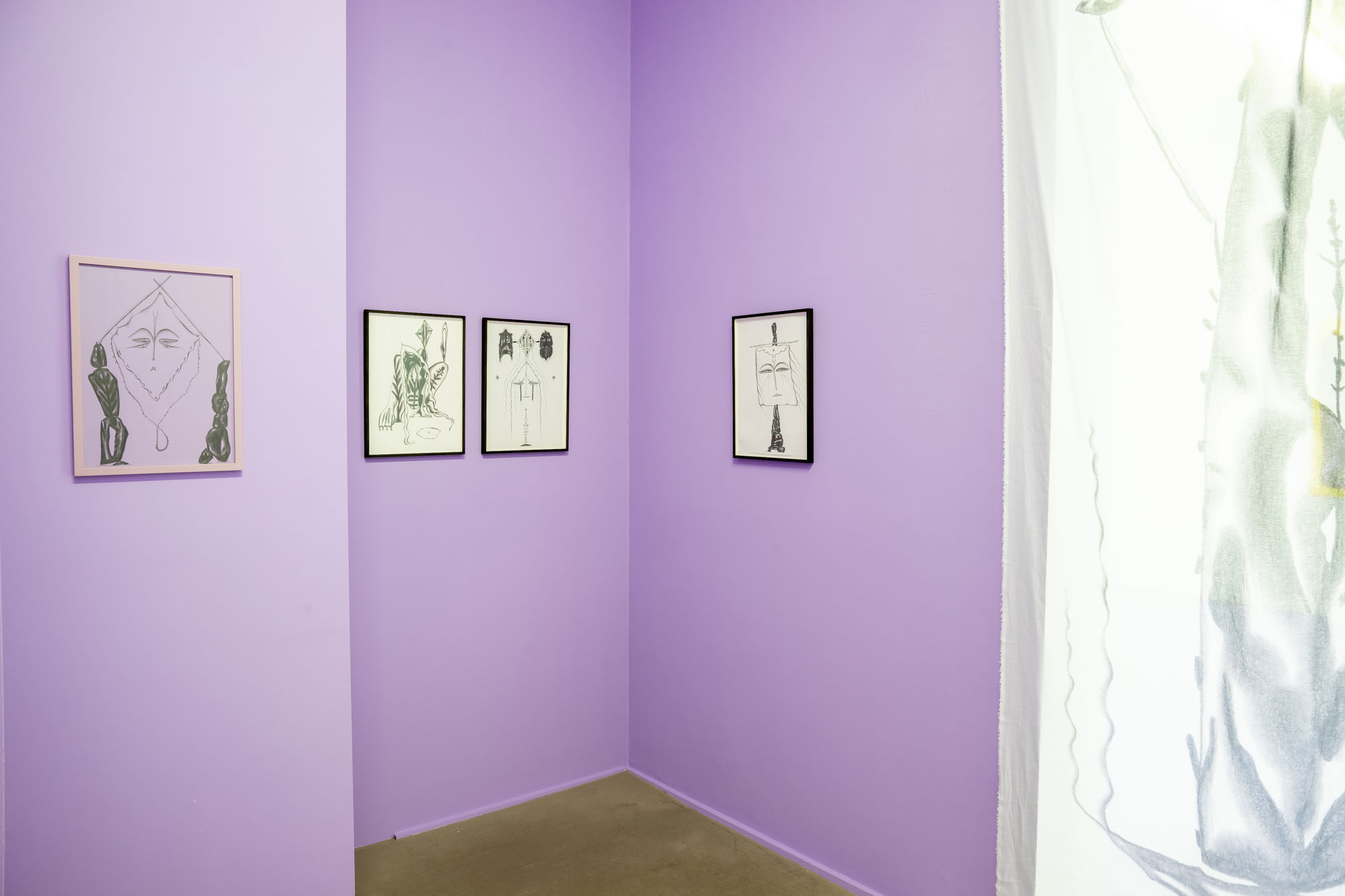 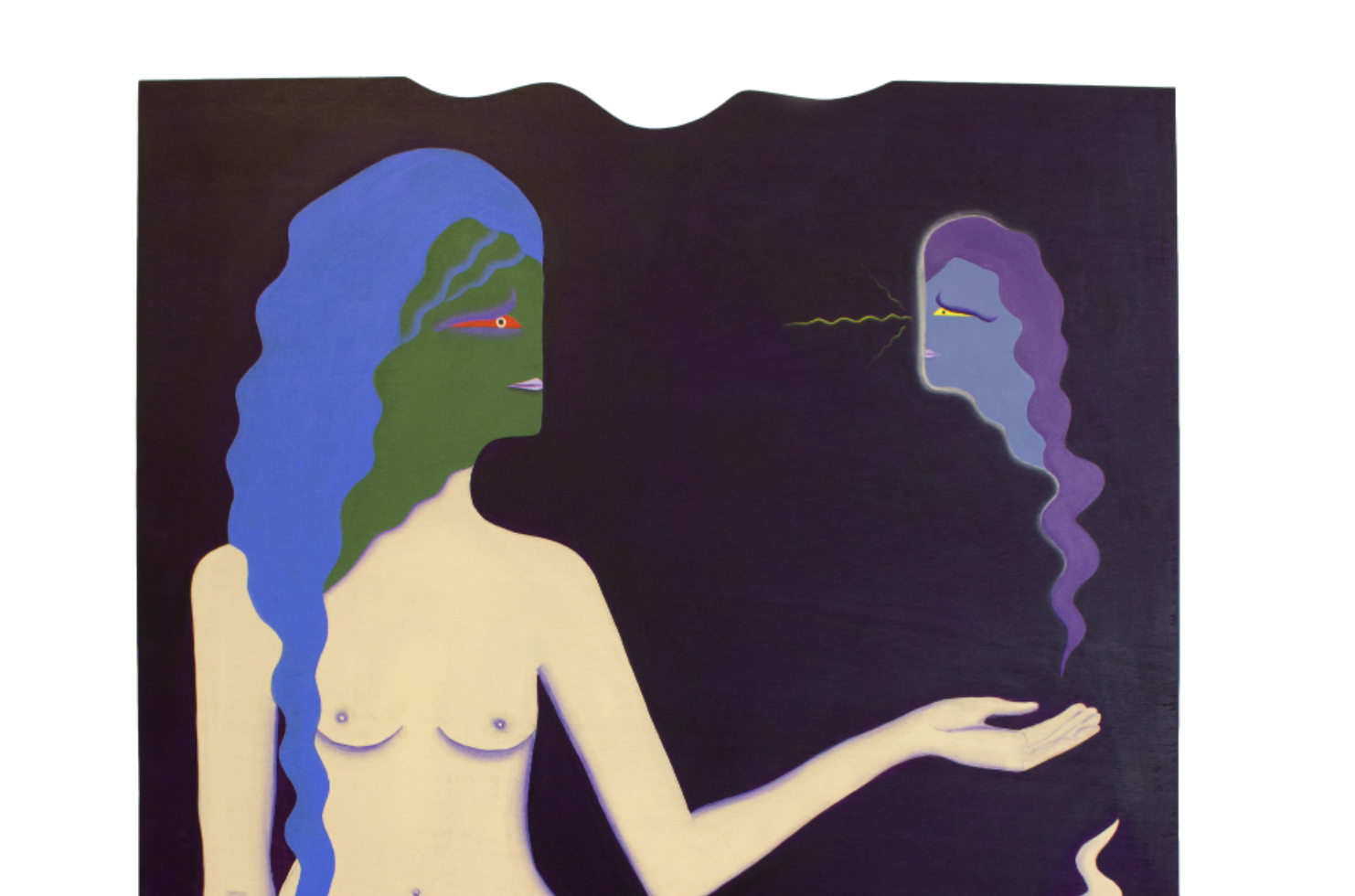 Opening on Thursday September 1, from 5 - until 8 pm, a solo exhibition by Lysandre Begijn.

Echo’s Answer, the title of this exhibition, encompasses a contradiction. Since an echo is a repetition, a resonance of a sound or something that was said before, it cannot be an answer. Yet, perhaps, in the resonance of repetition a visceral answer may hide. In its ritualistic, almost shamanistic repetition, thoughts are echoed and embedded.

Lysandre Begijn’s imagery references an at times archaic visual register which echoes Greek mythology as well as Cretan and Etruscan art. Although it is tempting to recognise Minoan priestesses (Minoan Electricity), Medusas or other idolised women, these figures are no known mythological deities, but are Begijn’s own created entities that are part of a cosmology that is uniquely her own and is oddly universal at once. Despite overwhelmingly taking on female shapes, the creatures in this new, intuitively matriarchal universe are not necessarily woman or man and could be hermaphroditic.

Full-bodied figures, often holding symbolic or medicinal plants, or holy trees as attributes, only recently made their appearance in Begijn’s oeuvre. While the heads are rather square-jawed, the remainder of the bodies, which sometimes seem disconnected from the top part, have curvy shapes. The heads or ‘faces’ often sit on the more refined, feminine torsos or seem to be worn by them. These idiosyncratic figures bear a double aspect; the Minotaur, the griffin or the centaur are never far off. So is the Lorelei, which attracts and destroys.

More than faces, these heads are suggestive of masks onto which expressions are unabashedly exaggerated. Masks, or persona (of which the word person is derived) in Latin, tend to hide the face of the bearer, to provide that person with a second persona and to give free reign to the unconscious. They help to externalise the subconscious and to vent the unknown, deep-rooted anxiety, the supernatural and primitive instincts. These face mask-headed bodies can be read as metaphoric of people in turmoil. The anxious look, the apathetic glare, the sad glance and the tormented gaze all testify of the inner struggle of people. Begijn’s works deals with the malaise that sometimes holds sway in the soul of man, which becomes apparent in anxiety and depression. Jung too is never far off.

More than paintings, Begijn’s artworks are objects of which the shape of the support, as well as additional elements, reinforce and merge with the painted image. They are modern icons of the human condition, icons in which the transition between worlds, multiple universes or realities is implicitly and ubiquitously present (Charon, Morpheus, Trans Hortus).

While Begijn's work is colourful and seemingly joyous, it has inherent duality. Colours are chosen carefully but entirely intuitively. Aesthetically appealing as they may be, from poison ivy green to sacrificial seductive scarlet or violent violet, colours can bear toxic connotations. Ornament, of which colour is a part, constitutes a significant aspect of the image. It is an element that occurs in cultures worldwide and emerges from the necessity to surround oneself with beauty as consolation, as an evasion from ugliness. Beauty is not superficial, but is essential.

Lysandre Begijn’s work is not determined, nor is it closely defined. While refusing to lead a hermit’s life, Begijn withdraws from pragmatic life that reality imposes. Rather, she creates her own universe, one that stems from her keen interest in subconsciousness. Evasion in one’s mind and art functions as an antidote to the spreading of imposed collective ideas. It permits for freedom. Art takes place outside reality, but paradoxically can exercise an influence on reality. The artist as a shamanistic figure, as a priestess, sensibly beholds the world.